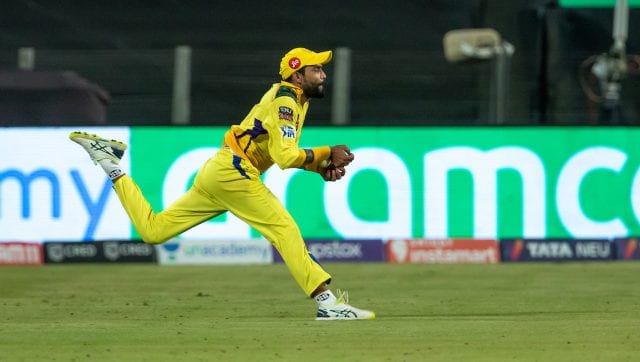 Amid rumours that there has been a fallout between Chennai Super Kings and Ravindra Jadeja, who was recently released from the camp due to an injury, the former IPL champions’ CEO Kasi Viswanathan has said that the Indian all-rounder was released based “on medical advice”.

On Wednesday, CSK announced that Jadeja, who was appointed as CSK captain at the start of the Indian Premier League 2022 before MS Dhoni took back the role midway through the season, has been ruled out of IPL 2022 due to a bruised rib. However, it was soon reported by some media houses that there has been discord between the player and franchise while CSK’s Instagram handle also unfollowed Jadeja.

It has been reported that there’s been discord between Ravindra Jadeja and CSK. Sportzpics

CSK’s Viswanathan rubbished the reports and added that Jadeja “firmly remains in the CSK’s scheme of things”.

“Social media, I absolutely do not follow anything. I have no knowledge of what is going on there. What I can tell you is that from the management side, there has been no problem and whatever is there on social media, I’m not aware. Jadeja firmly remains in the CSK’s scheme of things for the future, always,” Viswanathan told the Indian Express.

“Jaddu had an injury during the game against RCB and after that he didn’t play the game against Delhi Capitals. On medical advice, it has been decided that he cannot participate further in this IPL and he is heading back home. He has been released.”

Jadeja, who was one of the stars of CSK’s IPL winning campaign in 2021, struggled as a player after being made the captain at the start of the 2022 season. He scored just 116 runs in 10 matches and only managed to pick five wickets.

He handed back the captaincy to Dhoni on 20 April after CSK lost six out of the first eight matches. After the switch in captaincy, Dhoni publically stated that the extra responsibility affected Jadeja’s mind.

“I think Jadeja knew last season he’d be captaining this year. For the first two games, I oversaw his work and let him be later. After that, I insisted he’d take his own decisions and responsibility for them,” Dhoni said.

“Once you become captain, it means a lot of demands come in. But it affected his mind as the tasks grew. I think captaincy burdened his prep and performances.”

Denial of responsibility! NewsUpdate is an automatic aggregator around the global media. All the content are available free on Internet. We have just arranged it in one platform for educational purpose only. In each content, the hyperlink to the primary source is specified. All trademarks belong to their rightful owners, all materials to their authors. If you are the owner of the content and do not want us to publish your materials on our website, please contact us by email – [email protected]. The content will be deleted within 24 hours.
best sports newsCEOCSKsFirmlyFirstcricketFirstpostJadejaNews

Wazdan casts a Collect to Infinity™ spell in their new release, Magic Spins™