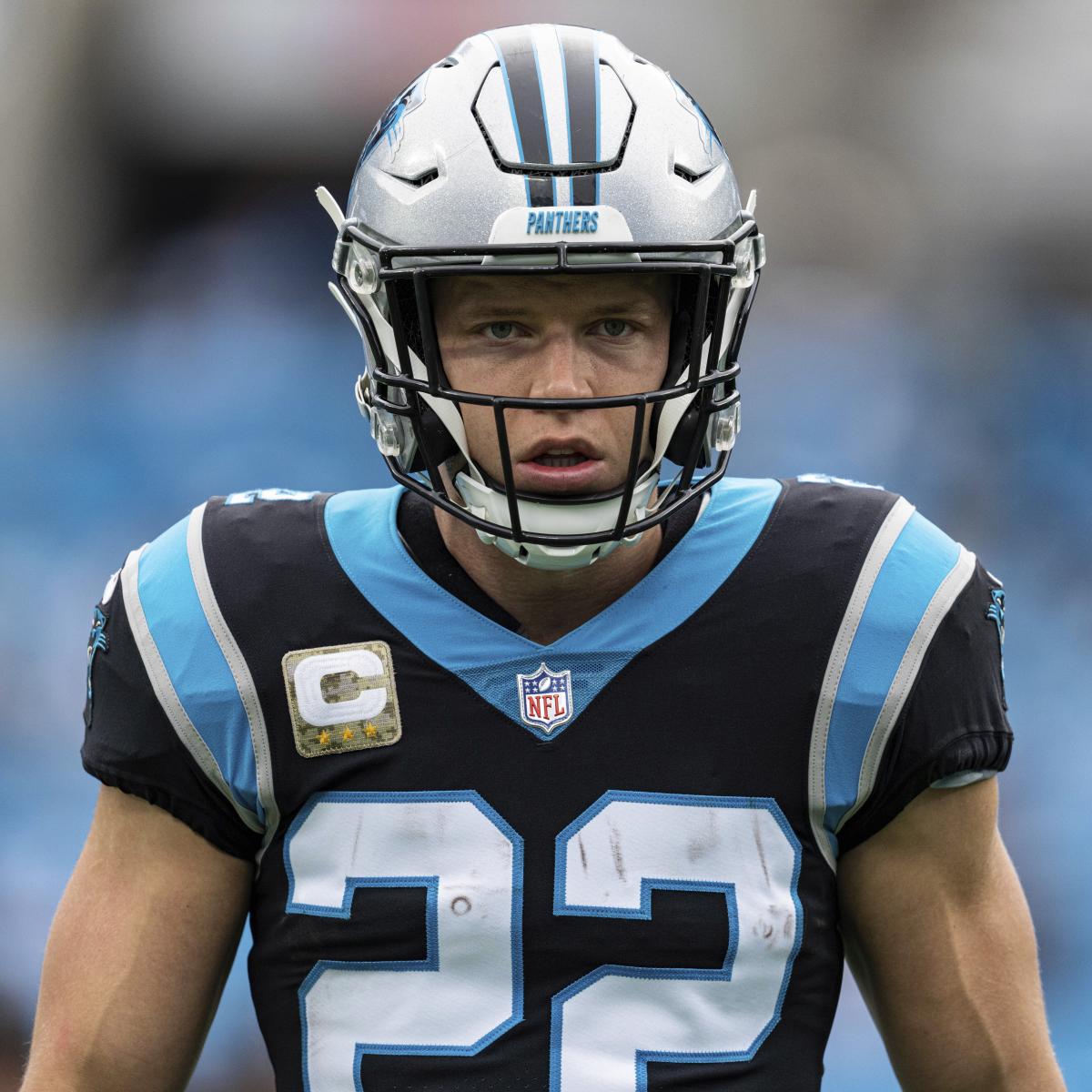 Realistic NFL Trades That Could Happen in 2022 Offseason

The 2021 NFL season has yet to crown a champion, but many teams are already looking forward to the 2022 campaign.

The league’s landscape will look different by the time next season kicks off. The draft, free agency and blockbuster trades can and will have a real impact on the NFL’s hierarchy.

While trades can be difficult to predict, there are some stars who stand out as the most likely to be dealt this offseason. Whether they’ve been dealing with injuries, playing poorly or are simply too costly for their current club to retain, these name-brand talents are likely to be on the move at some point before September.

Gardner Minshew has performed well as a spot starter during stops in Jacksonville and Philadelphia, but the 2019 sixth-rounder may be on the move again as teams try to unearth a potential long-term starter this offseason.

NFL.com’s Ian Rapoport believes Minshew will be a hot trade target, especially after the 25-year-old’s recent performances filling in for Jalen Hurts.

Minshew saw action in Weeks 13 and 18, completing 39 of 58 pass attempts for 428 yards and four touchdowns against one interception.

It’s possible that Minshew remains in Pennsylvania even if his time in the City of Brotherly Love comes to an end.

Minshew could head west to Pittsburgh, where he would join a Steelers organization preparing to move on from longtime quarterback Ben Roethlisberger.

Big Ben has hinted at his plans to retire following the season, opening the door for Minshew to compete for the starting job in 2022.

Pittsburgh doesn’t have a viable succession plan in place, as backups Mason Rudolph and Dwayne Haskins have both failed to show they could be a long-term solution under center.

Rapoport reported that “most teams view Minshew as at least a bridge starter with upside,” making him a great low-cost pickup.

The Eagles may try to turn a small profit on the sixth-rounder they gave Jacksonville for Minshew in August, but the Steelers don’t have much in the way of mid-to-late-round picks this year.

Still, Philadelphia might prefer a future pick based on the sheer amount of draft selections the club holds in 2022. Flipping a 2023 fourth-rounder for Minshew could get this deal done.

Panthers Receive: 2022 first-round pick (from WAS)

The Carolina Panthers are reportedly open to dealing star running back Christian McCaffrey.

It would have been nearly impossible to believe two years ago, but according to Joseph Person of The Athletic, the organization is open to a trade after McCaffrey has only seen action in 10 games since the start of the 2020 campaign.

The 25-year-old is currently on a record four-year, $64 million deal—which made him the highest-paid running back in NFL history in terms of average annual value—that runs through the 2025 season.

Since inking his name to that contract, McCaffrey has only posted a combined 1,159 rushing and receiving yards while missing 23 games.

While $16 million a season is a steep cost for potential suitors, a healthy McCaffrey could still provide an excellent return on investment.

Those elite years came during Ron Rivera’s tenure as Carolina’s head coach. Rivera has tried to replicate the success he found with McCaffrey by using Antonio Gibson as an offensive centerpiece in Washington, but the second-year back hasn’t been nearly as effective in the role.

Gibson has rushed a respectable 428 times for 1,832 yards and 18 touchdowns in his first two seasons, but hasn’t been an elite pass-catching back. He reeled in 78 receptions for 541 yards and three scores in that span, a far cry from the receiving numbers McCaffrey put up while playing under Rivera.

Reuniting McCaffrey with the coach who got the most mileage out of him could be a win for both parties.

Washington can absorb the back’s massive contract with the $59.5 million it has to work with in 2022, which is the fifth-most cap space in the league, per Spotrac.

Person finds it “hard to imagine” the team will get fair value for the back, but if Washington coughs up a first-rounder, it just may be enough to get a deal done.

Calvin Ridley made headlines back in October when he announced he would be stepping away from football to focus on his mental health. The wideout ultimately missed the remainder of the 2021 campaign and could be in line for a trade if he elects to return in 2022.

The Falcons have a difficult decision to make with Ridley, who struggled to produce this season before taking his leave of absence. The team could save approximately $11.1 million by moving on from the wideout before the new league year begins June 1.

Steve Wyche reported that “both sides could be looking for a fresh start,” opening the door for a split this offseason.

While Ridley’s contract appears high for a player who contributed just 281 yards and two touchdowns on 31 receptions in five games this year, he could end up being a bargain to his next team.

The 27-year-old is only one year removed from a career season, as he earned second-team All-Pro honors after exploding for 1,374 yards and nine touchdowns on 90 receptions in 2020.

While suitors will likely be cautious about coughing up too much for him, there should be no shortage of interested parties if Ridley elects to return to the field.

One place Ridley could land is Philadelphia, where the Eagles would pair him with another Alabama product in DeVonta Smith.

Smith is coming off a promising rookie year, one in which he caught 64 of his 104 targets for 916 yards and five scores despite getting little help from fellow receivers Jalen Reagor and Quez Watkins.

Philadelphia has been a regular player in the trade market under general manager Howie Roseman, who recently swung an in-season deal that sent tight end Zach Ertz to the Cardinals.

Roseman could cash in some of the immense draft capital he’s accumulated—which includes three first-rounders in 2022—to secure Ridley’s services, getting the type of wideout the Eagles sorely need to complement Smith.

After missing the playoffs for the sixth consecutive season, the Broncos may finally swing for the fences this offseason.

While incumbent starting quarterback Teddy Bridgewater played well enough to keep the franchise competitive in 2021, he couldn’t elevate the club to a contender during his one-year deal.

With that contract now expiring, the Broncos should be looking elsewhere to find a quarterback who can provide a real jolt to this offense. One realistic option is Kirk Cousins, who could benefit from a change of scenery after four years in the Twin Cities.

Cousins had a strong 2021 season, throwing for 4,221 yards and 33 touchdowns with just seven interceptions. Despite this, Minnesota missed the playoffs for the second straight year and may be ready to move on, especially when considering how much Cousins will cost in 2022.

The 33-year-old is going into the final year of a two-year, $66 million extension he signed in 2020. Cousins is owed $35 million for the upcoming campaign, a significant amount of money for a player who has only reached the postseason once since coming aboard in 2018.

Daniel Kelly, a former NFL scout and current SI.com writer, believes the Vikings would accept a deal centering around Denver’s 2022 first-rounder and another potential selection.

The pick, in conjunction with the club’s own first-rounder, would allow Minnesota to either select a potential franchise QB or at least give the Vikings enough capital to slide up the board and get their guy.

It would also bring the Broncos their first high-end quarterback since Peyton Manning, giving the franchise real hope of contending again at a fair price.

After missing the entire 2021 campaign, Deshaun Watson could be on the move this offseason.

The Houston Texans quarterback failed to play this year while under investigation after 22 women filed lawsuits alleging sexual assault or misconduct.

While the investigation has yet to conclude—making it difficult for any team to deal for Watson right now—the 26-year-old may become a popular trade target in the near future.

The Cleveland Browns are being linked to Watson after the club struggled to build on last year’s success.

SI.com’s Albert Breer is confident Cleveland’s brass would try to bring the quarterback into the fold:

“I absolutely believe the Browns are going to be a player for Deshaun Watson if and when he becomes available.”

The Browns came into 2021 on the heels of an 11-5 season and their first playoff victory since 1994, but they were eliminated from postseason contention last week. The team finished with a losing record for the 13th time in 14 years.

Quarterback Baker Mayfield noticeably regressed as he dealt with various injuries. His yardage, touchdown, completion percentage, interception and sack numbers all tumbled during a trying season.

While Mayfield remains under contract for 2022 after the organization picked up his fifth-year option in April, the team can still trade the signal-caller without penalty.

Watson has also been a far more impactful scrambler, rushing 307 times for 1,677 yards and 17 scores against Mayfield’s 158 rushes for 571 yards and five touchdowns.

Cleveland may want to package its current starter for Watson, with the Texans potentially getting a better version of Mayfield if he returns to full health following his impending shoulder procedure.

It would likely take multiple first-rounders in addition to Mayfield to get a deal done, but Watson—a Pro Bowler in each of his last three seasons—would be a clear upgrade at the position.

Denial of responsibility! NewsUpdate is an automatic aggregator around the global media. All the content are available free on Internet. We have just arranged it in one platform for educational purpose only. In each content, the hyperlink to the primary source is specified. All trademarks belong to their rightful owners, all materials to their authors. If you are the owner of the content and do not want us to publish your materials on our website, please contact us by email – [email protected]k. The content will be deleted within 24 hours.
best sports newshappennews update sportsnewsupdateNFLOffseasonrealisticsports news