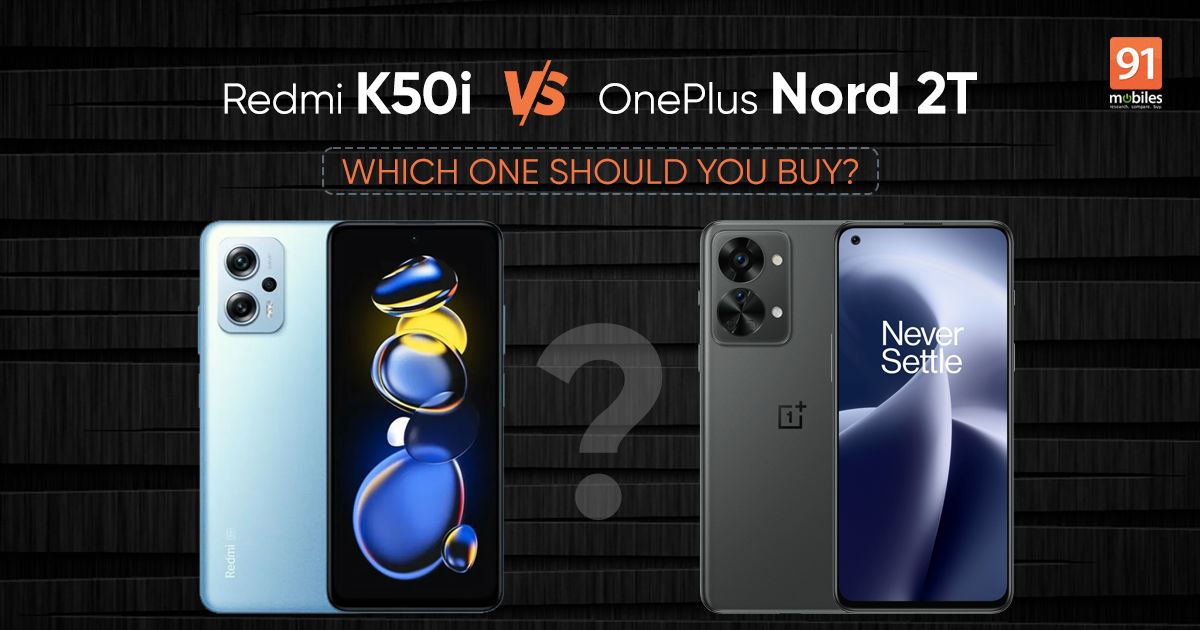 One believes in living the extreme life. The other is one (with a plus) that does not settle. One marks the return of a popular series. The other is the first T variant in a series that is already a rage. They both boast some serious performance muscle and yet manage to come with price tags that are firmly mid-segment. And they are both so high profile that anyone wanting to get a phone in the Rs 25,000 – Rs 30,000 range will definitely have to consider them. But which of the Redmi K50i 5G, the phone that marks the return of the Redmi K series to India, or the OnePlus Nord 2T 5G, the first Nord with a T in its name, should you be going for?

Let’s work that out for you.

Design and appearance: Who’s got the look? 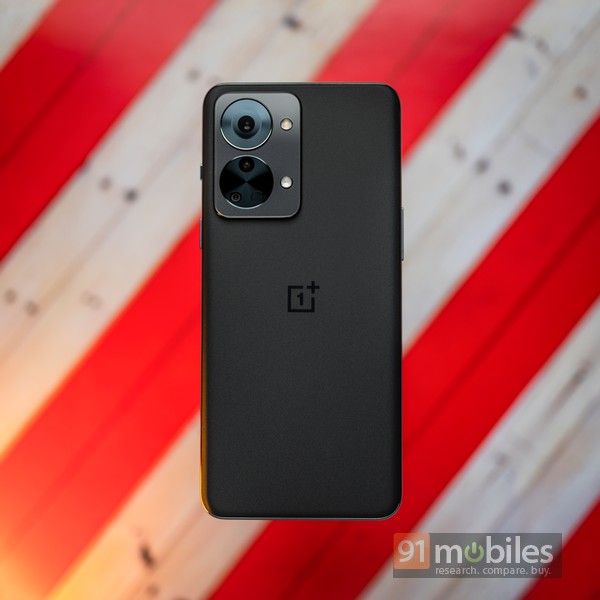 They might be competing in the same price segment, but in terms of appearance, the OnePlus Nord 2T and the Redmi K50i are about as similar as chalk and cheese. The Redmi K50i has straight sides and a plastic back while the Nord 2T comes with curved sides and a glass back. The Nord 2T also comes in more subtle grey and green shades, while the Redmi K50i’s blue and silver shades are a little more in your face (the black one isn’t, but then it is black). The Nord 2T also has larger camera cutouts than the K50i, though which you prefer is going to be a matter of your personal aesthetic. The Nord 2T is a more compact phone, with a height of 159.1mm as compared to 163.6mm of the Redmi K50i. It is also less wide (73.2mm against 74.3mm), and slimmer at 8.2mm against 8.8mm. At 190 grammes, the Nord is also 10 grammes lighter than the Redmi K50i. 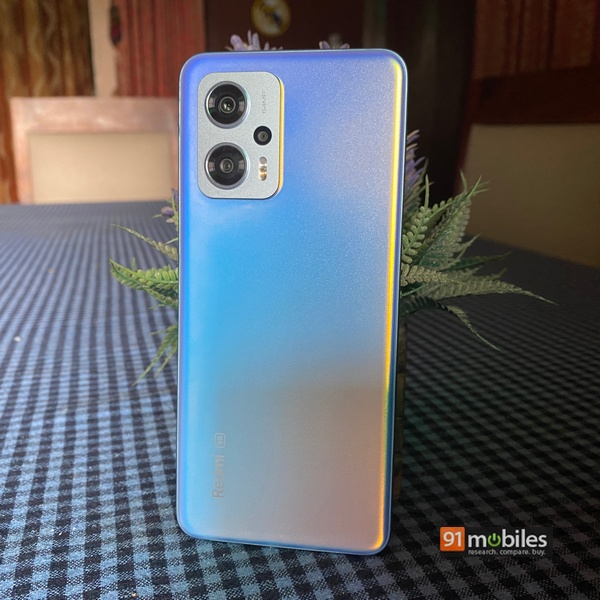 So which one looks better? We would cast our vote for the Nord 2T, especially its Gray Shadow variant which reminds us of the sandstone finish on the first OnePlus phone. The Redmi K50i is not bad to look at and actually comes with IP53 dust and water resistance, but it just looks way more routine than the Nord 2T. 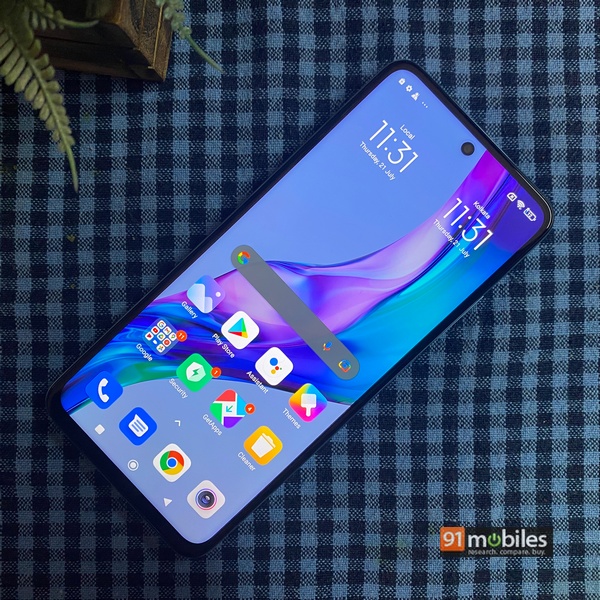 For many spec chasers, this is the biggest difference between the two phones. The OnePlus Nord 2T comes with a 6.43-inch full HD+ AMOLED display with a 90Hz refresh rate, and the Redmi K50i seems to make mincemeat of it with a larger 6.6-inch full HD+ display with a 144Hz adaptive refresh rate that changes as per the content being displayed on it. However, there is a factor that might level matters out for many users – the Redmi K50i comes with a FFS LCD display, not an AMOLED one. And this sparks off another chapter in the LCD vs AMOLED battle. Without getting too much into technicalities, we found that the Nord 2T’s display seemed to have more pleasing colours but those who prefer more realistic shades would like the Redmi K50i, which is actually quite a good display in its own right. There is also no doubting that scrolling was way smoother on the Redmi K50i. The Nord 2T has AMOLED and a lower refresh rate, the Redmi K50i has a high-quality LCD and a much higher refresh rate. Both are rather good in their own ways. We are calling this one a tie. 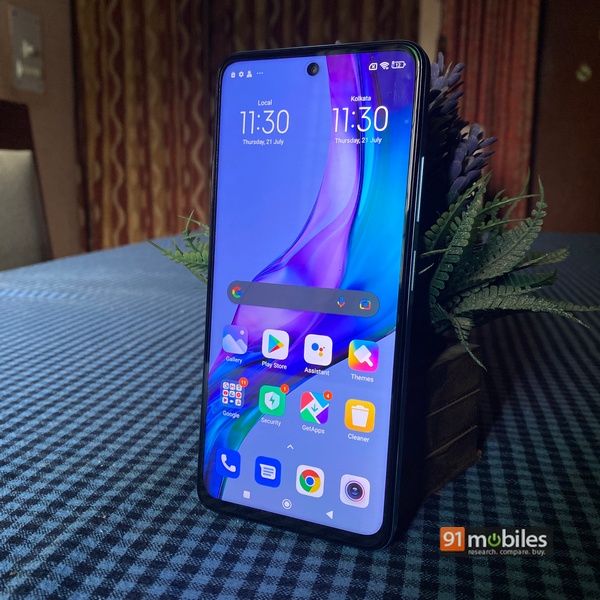 In terms of processor, the Redmi K50i emerges a clear winner. The MediaTek Dimensity 1300 on the Nord 2T is a very good upper mid-segment processor and can handle most tasks with ease, but the MediaTek Dimensity 8100 on the K50i is close to flagship level and the difference in performance is very visible when you get into heavy-duty editing or gaming. This is a round the Redmi K50i wins comfortably.

The OnePlus Nord comes with two RAM and storage variants: 8GB / 128GB and 12GB / 256GB. The Redmi K50i also has two variants, but these are 6GB / 128GB and 8GB / 256GB. You would have thought that the Nord would get a slight edge here based on those numbers, but the Redmi K50i actually uses LPDDR5 RAM, which is superior to the LPDDR4X used on the Nord 2T. Both phones come with UFS 3.1 storage, and neither has expandable storage. It becomes a quality vs quantity issue here – with the K50i having the former and the Nord 2T having the latter. We are calling this one a tie.

Gaming and multimedia: Extreme-ly one sided 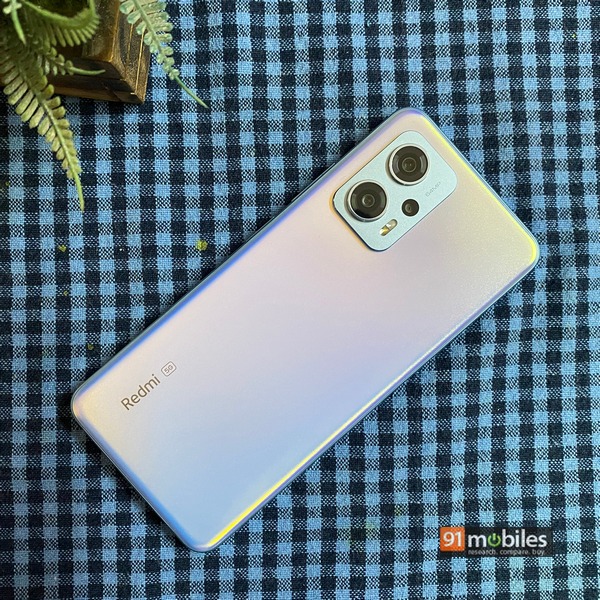 A larger display with higher refresh rate, more powerful processor and superior RAM give the Redmi K50i a clear edge over the OnePlus Nord 2T when it comes to gaming and multimedia. The Nord 2T is a decent device for playing games, as long as you are willing to tweak settings. However, hardly any tweaking is required on the Redmi K50i which rocks most games at high settings easily. The bigger display does make a difference while both playing games or watching videos, and the fact that the K50i not only has better stereo speakers but also a 3.5mm audio jack for those who want to use wired headphones, completes the rout. This is a thumping victory for the Redmi K50i – and no, the AMOLED display does not really save the day for the Nord 2T here.

Cameras: Snap, who’s got it? 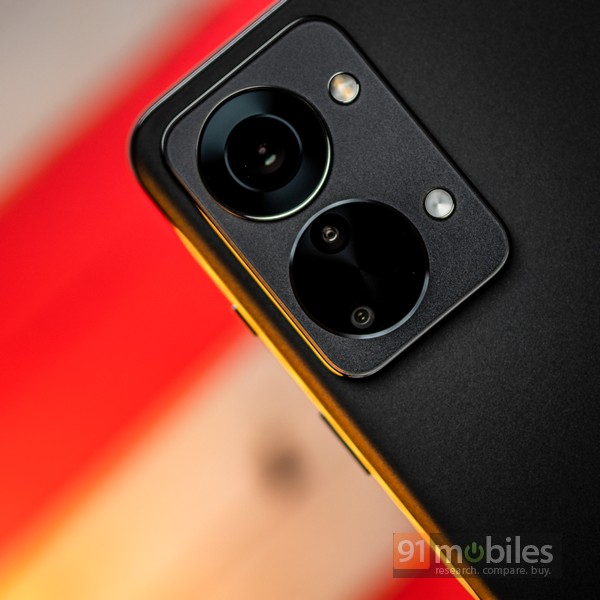 If the Redmi K50i ran away with the gaming and processor rounds, the OnePlus Nord 2T strikes back in the camera department. Both phones come with triple camera arrangements on the back. On paper, the Redmi K50i seems to have the specs going for it with a 64-megapixel main camera, an 8-megapixel ultrawide and a 2-megapixel macro camera, as compared to the Nord 2T’s 50-megapixel main shooter, 8-megapixel ultrawide and 2-megapixel mono lens. However, the Nord 2T’s main sensor is the flagship-level Sony IMX766 with OIS thrown in for good measure, and it delivers much better images in terms of both colour and detail, both in normal as well as low light conditions. Video quality also was discernibly better on the Nord. This superiority extends to the selfie snappers too, with the Nord 2T’s 32-megapixel shooter beating the 16-megapixel one on the Redmi K50i very comfortably. The Nord 2T clearly has the cameras more people would say cheese to! 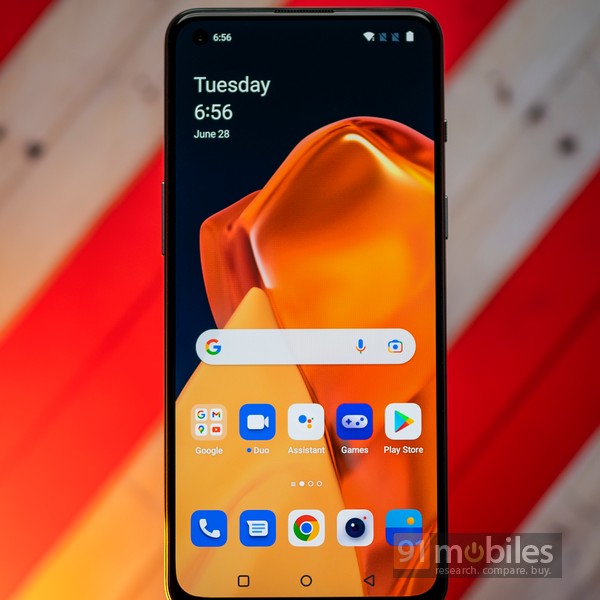 Remember the chalk-and-cheesiness of the design round. It resurfaces here as well. Both phones run on Android 12, but it is what lies above that makes them different. The Redmi K50i comes with Xiaomi’s elaborate and feature-rich MIUI 13 interface, while the OnePlus Nord 2T has a more Spartan and minimalistic OxygenOS running on it. Both interfaces have their own pros and cons. The Redmi K50i gives you more right out of the box, while OxygenOS leaves you to do most of the tweaking and installing. A couple of years ago, OnePlus would have taken this round thanks to its better software update record and the ads in MIUI but recent times have seen Xiaomi polish up its ad and update act, while OnePlus has had a few issues on the update front. Which one of the two interfaces you like depends on your own preferences and tastes. We are calling this one a tie.

Battery life and charging: A matter of mAh and watts

This is an interesting round. The Redmi K50i comes with a 5,000mAh battery as compared to the 4,500mAh one on the Nord 2T. Both see off a day of usage easily, with the Redmi K50i lasting a little more, in spite of having a larger display and a higher refresh rate. However, while the K50i comes with a 67W Turbo Charge charger in the box, the OnePlus Nord 2T comes with an 80W SuperVOOC one. In real-life terms, the Redmi K50i takes about 45 to 50 minutes to get totally charged from zero, while the Nord 2T does the same in about half an hour. Faster charging or greater battery life? The choice is yours, really. We are calling this one a tie. Yes, another one. 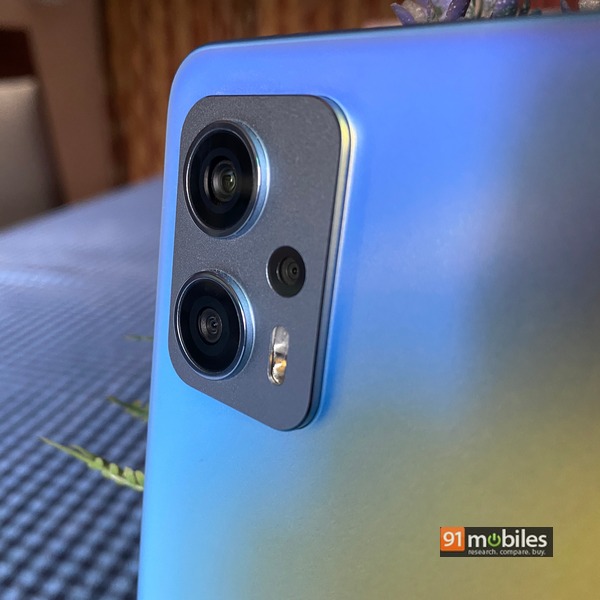 Both phones handle routine tasks like calls, messaging, web browsing, and social networking with a degree of ease. The Nord’s more compact frame does make it a little easier to handle but that advantage is cancelled out by the better sound on the Redmi K50i, which also brings the additional utility of a 3.5mm audio jack. We felt the Nord 2T handled calls a little better but the Redmi K50i is good enough at calls and also has Bluetooth 5.3 and infrared connectivity. We also felt that the fingerprint sensor on the side of the Redmi K50i worked better than the in-display one on the Nord 2T. The Nord 2T, however, has the iconic alert slider that is super convenient for those who want to switch between different phone modes. It is difficult for us to pick a single winner here, so we are going for yet another tie.

Value for money: the price matters

Which one to go for: Ok with K, or One for OnePlus? 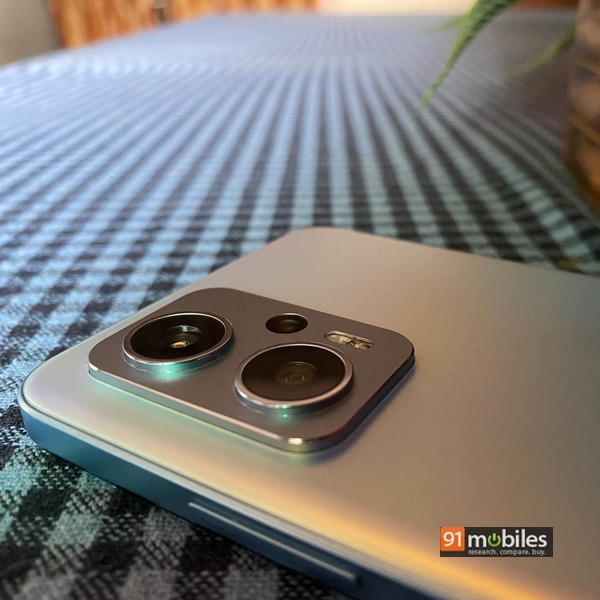 As you can see, it is a very close battle between the two phones, with five of the ten comparison parameters ending in ties. Of the remaining five, the Redmi K50i takes three while the Nord 2T triumphs in two. However, which really works for you is really a matter of preference and needs. The Redmi K50i is much more of a spec beast while the OnePlus Nord 2T is more about understated beauty. Those looking for sheer processor muscle and into gaming would be better served by the Redmi K50i. The Redmi K50i is also the better device in audio terms by some distance, thanks to its very good speakers and 3.5mm audio jack. However, if you are looking for a classy-looking compact phone with good cameras, which sails through routine daily tasks easily and charges in a jiffy, the OnePlus Nord 2T emerges as the better option. The Nord 2T would also be the choice of those who want a cleaner, less crowded interface. In either case, you will be ending up with one of the best phones the segment has to offer.

With inputs from Akriti Rana

Denial of responsibility! NewsUpdate is an automatic aggregator around the global media. All the content are available free on Internet. We have just arranged it in one platform for educational purpose only. In each content, the hyperlink to the primary source is specified. All trademarks belong to their rightful owners, all materials to their authors. If you are the owner of the content and do not want us to publish your materials on our website, please contact us by email – [email protected]. The content will be deleted within 24 hours.
91mobiles.combest technology newsbuycomparisonsK50iMobilesnews update technewsupdate

Top MLB Prospects Who Could Be Prizes of 2022 Blockbuster Trades