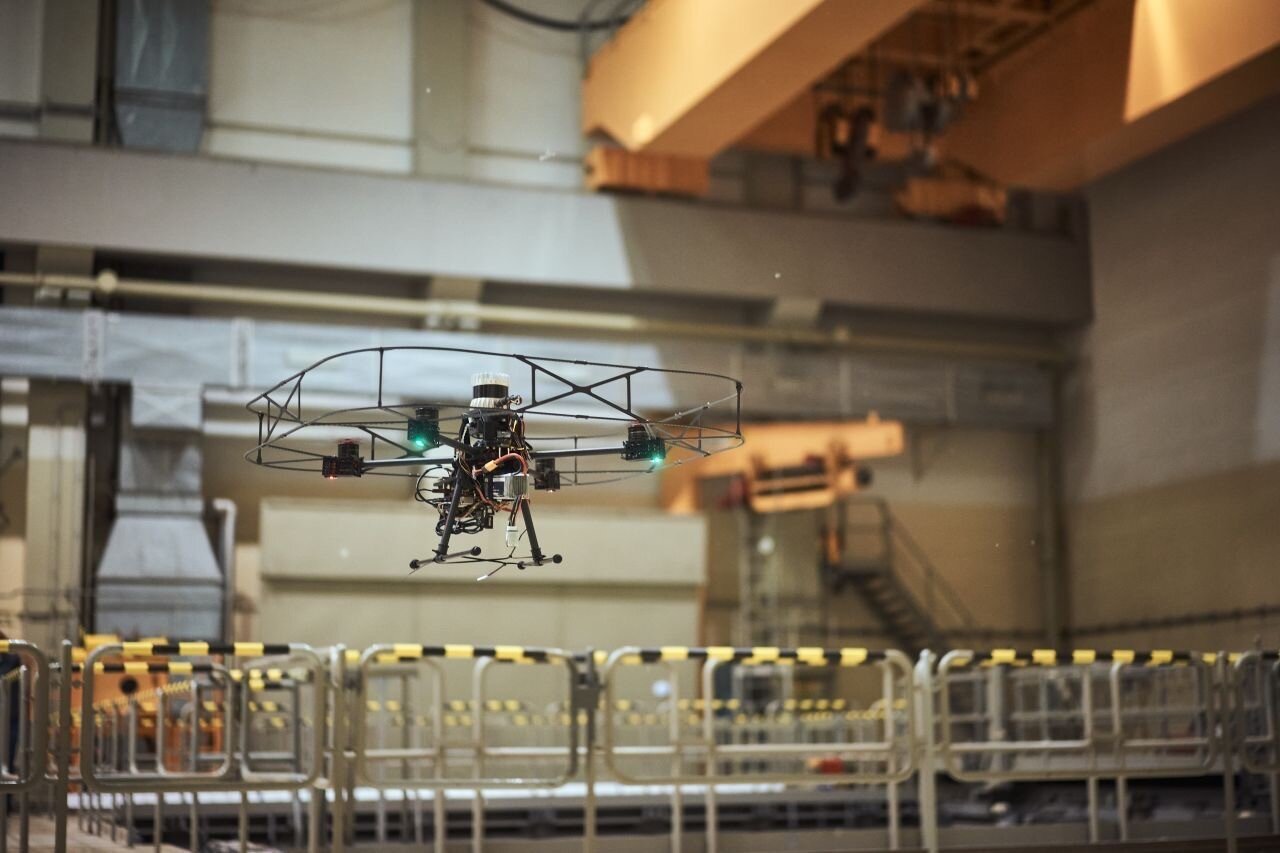 During the EnRicH 2021 European Robotics Hackathon, Southwest Research Institute’s unmanned aircraft system (UAS) explored and mapped the interior of a nuclear power plant, detecting radiation sources—autonomously without the aid of a human pilot. SwRI’s UAS, or drone, technology can potentially assist in life-saving search-and-rescue missions and hazardous inspections at industrial facilities and infrastructure following natural disasters and other incidents.

The hackathon took place Oct. 4-8 in Austria’s Zwentendorf Nuclear Power Plant, the only nuclear facility that has been completely built but never activated. The inoperable boiling water reactor plant serves as a training ground to prepare for radiological and nuclear incidents and disaster scenarios.

“Today’s drones and ground robots typically require a lot from a human operator,” said Eric Thorn, manager of SwRI’s UAS research team. “The autonomy we’ve demonstrated has the potential to significantly reduce the burden on human operators, allowing robotic systems to act independently and operate themselves.”

“We’ve developed a full autonomy stack that can be paired with a variety of sensors and UAS platforms to perform critical missions,” Thorn said.

Using algorithms and modeling tools, the technology maps the spatial topography of internal structures and open spaces in real-time. Fusing data from computer vision sensors, the technology maps routes as it explores new locations. Perception techniques to detect people, vehicles and other objects are also available based on convolutional neural networks (CNNs).

“We demonstrated our exploratory planner, which enables the system to map and navigate new spaces without the aid of human operators, which performed well despite a challenging environment,” said Chris Bang, an SwRI program manager in the Intelligent Systems Division. “The exploratory planner is proving itself in both man-made environments and in natural environments such as caves.”

During the EnRicH hackathon, the drone autonomously detected two sources of cobalt-60, a radioisotope, hidden in separate locations as part of a pre-planned challenge. Participants had no prior information about the facility, or the exploration challenges created by a panel of judges.

“The planner showed robust flexibility, adeptly operating in previously unknown environments,” Bang added. “It proved its ability to adapt, learn and perform tasks in real-time, which is crucial in time-critical search-and-rescue and hazardous scenarios.”

SwRI’s autonomy stack has been used in everything from commercial and military connected and autonomous ground vehicles to automated drones and intelligent agricultural equipment. It leverages open-source tools such as the robot operating system (ROS) and proprietary machine learning algorithms and artificial intelligence.

Denial of responsibility! NewsUpdate is an automatic aggregator around the global media. All the content are available free on Internet. We have just arranged it in one platform for educational purpose only. In each content, the hyperlink to the primary source is specified. All trademarks belong to their rightful owners, all materials to their authors. If you are the owner of the content and do not want us to publish your materials on our website, please contact us by email – [email protected]. The content will be deleted within 24 hours.
autonomybest technology newsdemonstratedroneEnRicHHackathonnews update technewsupdate

Instagram’s impact on children probed by US states