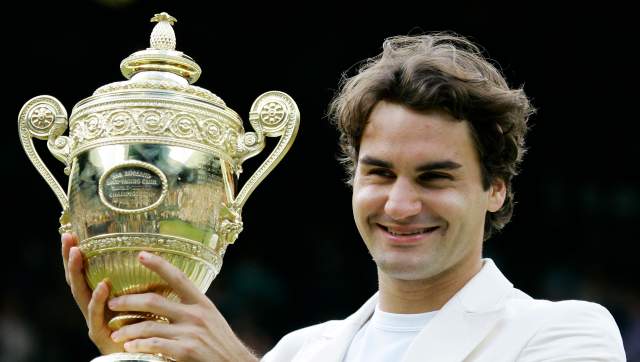 The 41-year-old has advanced the game to new heights over the course of his career spanning more than two decades while winning 20 Grand Slam singles titles.

Roger Federer who announced his retirement at age 41 on Thursday, is best known for his 20 championships at Grand Slam tournaments. AP

Roger Federer, widely considered the best male tennis player ever, will bid adieu to the court after next week’s Laver Cup in London. The 41-year-old has advanced the game to new heights over the course of his career spanning more than two decades while winning 20 Grand Slam singles titles. The Swiss legend revealed the long-awaited news in a lengthy statement on his Twitter handle on Thursday. Federer hasn’t competed in any major competition since dropping a set at Wimbledon last year due to a knee injury, but many still held out hope that he would return for one final golden farewell. Although, he stated that age has finally overtaken him.

Here we have come up with some top Wimbledon moments of Roger Federer:

Any tennis player would consider it a major accomplishment to dethrone one of the game’s all-time greats, but when 19-year-old Roger Federer defeated Pete Sampras in Wimbledon’s fourth round in 2001, very few spectators recognised the potential that was about to blossom. In stunning the American, Federer displayed elegance in his all-around play that ultimately became the key to his success.

In contrast to his nearly faultless 2003 Wimbledon performance, Roger Federer defeated Mark Philippoussis in the title bout 7-6, 6-2, 7-6 to win his first Grand Slam championship. Federer, then 21, made his maiden appearance in the semifinals of a Grand Slam after never making it past the quarterfinals in any of his prior Grand Slam appearances. Federer won the opening set in a tie-break following some outstanding serves from both players. The first set was quite close. After settling into a groove, the Swiss player confidently and stylishly unleashed his whole shot array to win the match in straight sets.

Rafael Nadal’s dethroning of Roger Federer on Centre Court in July 2008 is often recognised as the greatest tennis match ever played. This game featured one of the most incredible comebacks in the history of tennis. Nadal won the first two sets 6-4, 6-4, but Federer, who appeared unbeatable, came back to win the third and fourth after two wearying tie-breaks. Federer was vying for his sixth straight Wimbledon title, but 22-year-old Nadal stole the show by defeating him 6-4, 6-4, 6-7, 6-7, 9-7 in the final set.

By the time Roger Federer played Andy Roddick in the Wimbledon final of 2009, winning in straight sets had never been done. The year before, Federer had been defeated by Nadal in an exhausting match that lasted four hours and 48 minutes. It turned out to be their finest encounter ever as Federer handed Roddick the third and last massive blow after defeating the American in the 2004 and 2005 Wimbledon Finals. Roddick gave one of his best performances ever, but it wasn’t enough to beat the unstoppable Federer who went on to lift his record-breaking 15th Grand Slam title.

In a dramatic final against Andy Murray in July 2012, Federer triumphed with his signature grace and elegance to win his seventh Wimbledon and 17th Grand Slam title. Federer played with unrelenting composure to prove that he was the GOAT, despite the opponent’s desperate attempts to give the Centre Court fans a historic British victory. The Swiss was defeated in the opening set but immediately grabbed the upper hand in the following one by combining forceful baseline punches with finesse at the net. Federer kept focus throughout the break and returned more focused and aggressively under the rain covering.

Federer defeated his opponent 3-1 to win the game and lifted the Wimbledon title once again.

Denial of responsibility! NewsUpdate is an automatic aggregator around the global media. All the content are available free on Internet. We have just arranged it in one platform for educational purpose only. In each content, the hyperlink to the primary source is specified. All trademarks belong to their rightful owners, all materials to their authors. If you are the owner of the content and do not want us to publish your materials on our website, please contact us by email – [email protected]. The content will be deleted within 24 hours.
best sports newsFedererFirstpostlegendSportsMomentsNewsnews update sportsnewsupdate