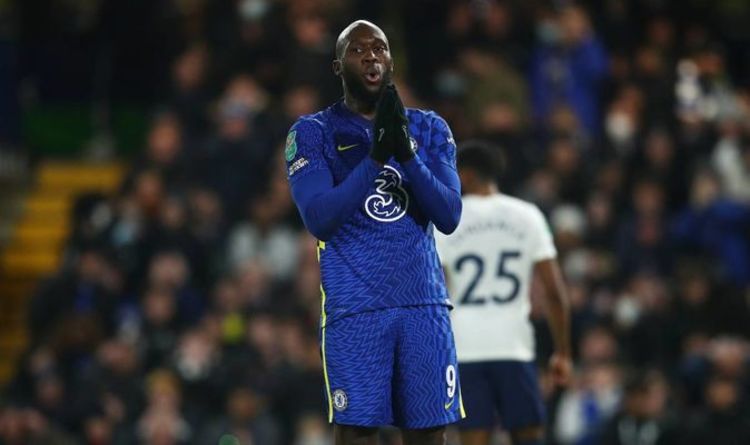 After a week of noise, finally came a chance for Romelu Lukaku to do his talking on the pitch. Lukaku has been through the ringer at Chelsea over the past seven days after his decision to give an interview to Italian media in an attempt to placate Inter Milan fans backfired spectacularly.

Chelsea may have laid waste to Tottenham in the first leg of their Carabao Cup semi-final, picking up a 2-0 win, but there was little in the way of personal redemption for Lukaku.

In the Belgian striker’s defence, he did not actually have to lead the fight, with the visitors intent on pressing the self-destruct button at Stamford Bridge.

The Blues dominated the first half and went into the break with a deserved 2-0 lead, but one which was strangely not of their own making.

Thomas Tuchel’s high press and Marcos Alonso can take plenty of credit for the opener, which came courtesy of Kai Havertz.

Alonso did well to read an under-hit pass from Japhet Tanganga to Emerson Royal and slid in Havertz, whose finish went into the roof of the net via Davinson Sanchez’s outstretched foot.

JUST IN: Man Utd interim boss Rangnick can transform fortunes with one signing

Before the Sky Sports Italia interview dropped last Thursday, Lukaku was quite content.

After shaking off COVID-19, he had made a promising return to the Chelsea side over December, scoring three times in his past four games coming into this match.

But the interview, which had been recorded three weeks previously, turned his week upside down, causing a furore the striker did not expect.

Tuchel was reportedly furious with his £97million man for causing an unwanted distraction ahead of Sunday’s game against Liverpool and reacted by dropping him from the squad.

That moment was not a sign of things to come; fast-forward 30 minutes later and Lukaku had touched the ball on just four occasions.

After 41 minutes his big chance came and went. With Mat Doherty backing off, Hakim Ziyech measured a perfect cross, but Lukaku could only guide a free header wide after jumping above Sanchez.

There were further glimpses of his quality in a snap shot on the turn and a nicely-weighted lay-off to Ziyech. But the goal he so craved did not come, with Sanchez shutting the door with a well-timed challenge on the break and an injury-time effort going straight at Hugo Lloris.

There will be other opportunities, with matches coming thick and fast over the coming weeks and Tuchel keen to move on from the entire saga.

Yet with Havertz back on the score sheet and Timo Werner making a return from the bench in the second half, Lukaku is not guaranteed his place leading the line.

Denial of responsibility! NewsUpdate is an automatic aggregator around the global media. All the content are available free on Internet. We have just arranged it in one platform for educational purpose only. In each content, the hyperlink to the primary source is specified. All trademarks belong to their rightful owners, all materials to their authors. If you are the owner of the content and do not want us to publish your materials on our website, please contact us by email – [email protected]. The content will be deleted within 24 hours.
best sports newschancechelseafluffsLukakunews update sportsnewsupdateRedemption

During LSG vs KKR run-feast, Mohsin Khan serves a bowling…