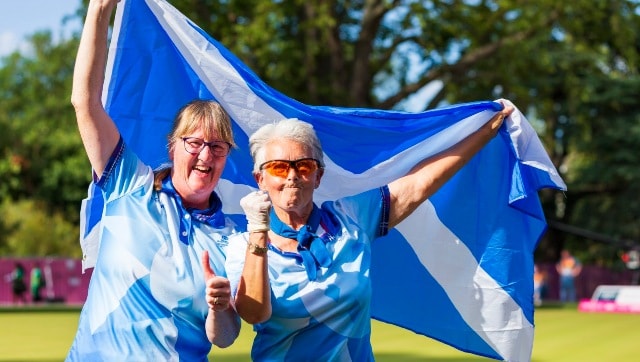 Scotland’s Rosemary Lenton in an amazing achievement at the age of 72 won a gold medal in women’s pairs event of Para Lawn Bowls (B6 – B8 category) on Wednesday in the ongoing Commonwealth Games in Birmingham.

Lenton partnered with 58-year-old Pauline Wilson to beat Australian duo of Cheryl Lindfield (63) and Serena Bonnel (40) with a score of 17-5.

Lenton became Scotland’s oldest ever CWG gold medallist with her win in the Para Lawn Bowls.

Scotland have a fourth gold medal at the 2022 Commonwealth Games!

Rosemary Lenton and Pauline Wilson, who have a combined age of 130, won gold in the Para-lawn bowls women’s pairs #BBCCWG pic.twitter.com/5EfIXNkJNt

Australia had started well with a lead of 2-1 after the third end. But the Scottish duo then took the charge and marched ahead of their opponents. After the 14th end, they were declared winners with a score of 17-5.

Lenton from Dumfries is amongst the oldest competitors at the quadrennial event. She was on cloud 9 after winning a gold medal on her maiden appearance.

“Absolutely fantastic. I’m dreaming. We both played excellently,” Lenton said after the win. “We always knew we could do it. In the round-robin, we didn’t always produce it, but when it really mattered we did, and that’s the important thing.”

Lenton had sustained an injury two decades ago that left her in a wheelchair. She then participated in nine editions of the World Championships in Wheelchair Curling.

Lawn Bowls is not played at Olympic Games and hence Lenton believes this is Olympics for them.

“It’s the first time that women’s para-bowls has been included. I thought I would never get to a Commonwealth Games and, if I did, it would be as a spectator. This is effectively our Olympics because we cannot get any higher,” Lenton added.

Interestingly, Cheryl Lindfield is also the oldest Australian at the Birmingham event and won the silver medal in Para Lawn Bowls.

Denial of responsibility! NewsUpdate is an automatic aggregator around the global media. All the content are available free on Internet. We have just arranged it in one platform for educational purpose only. In each content, the hyperlink to the primary source is specified. All trademarks belong to their rightful owners, all materials to their authors. If you are the owner of the content and do not want us to publish your materials on our website, please contact us by email – [email protected]. The content will be deleted within 24 hours.
agedbest sports newsCommonwealthgamesgoldLentonmedalnews update sports