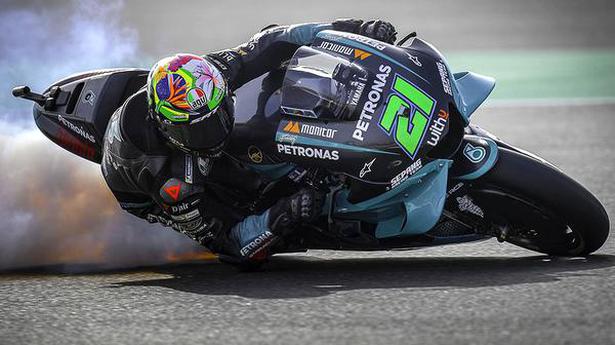 Rossi has taught me everything I know, says Morbidelli

The 2020 MotoGP season saw an exciting title fight and a new crop of winners emerge in the absence of six-time champion Marc Marquez, who missed the season due to an injury during the first round in Qatar.

One such rider was Franco Morbidelli who quickly established himself as the new star on the horizon by finishing second in the championship with three wins and two podiums. The 26-year-old, groomed by legend Valentino Rossi since his junior days at the VR46 Riders Academy in Tavullia (Italy), has teamed up with his mentor at Petronas Yamaha SRT for the 2021 season.

“Everything I know about being a pro rider — how to train, how to eat, how to behave — I have got it from Vale (Rossi),” he added.

Now teammates, Morbidelli said he can learn more from the seven-time MotoGP champion. “Spending time in the same environment will give me a chance to learn other things. I don’t know which ones because I will know them just at that moment and imbibe them.”

However, the 2021 season has not started well for the 2020 vice-champion with just four points from the first two races in Qatar.

“It is tough, especially after the results I did throughout the second half of last season, to see myself struggling so much in the first two races. But this is MotoGP and if you’re not in the perfect shape, you lose many positions,” said Morbidelli.

“(But) we have great trust in ourselves. We will have to regroup and face remaining races with great energy because we know what we can do.”

(MotoGP is live on Eurosport, Eurosport HD and live-streamed on Discovery+ from 3.30 p.m. on Sunday).

Denial of responsibility! NewsUpdate is an automatic aggregator around the global media. All the content are available free on Internet. We have just arranged it in one platform for educational purpose only. In each content, the hyperlink to the primary source is specified. All trademarks belong to their rightful owners, all materials to their authors. If you are the owner of the content and do not want us to publish your materials on our website, please contact us by email – [email protected]. The content will be deleted within 24 hours.
2020 MotoGP seasonbest sports newsFranco MorbidelliMorbidellimotogp newsmotogp racemotogp resultsmotogp standings