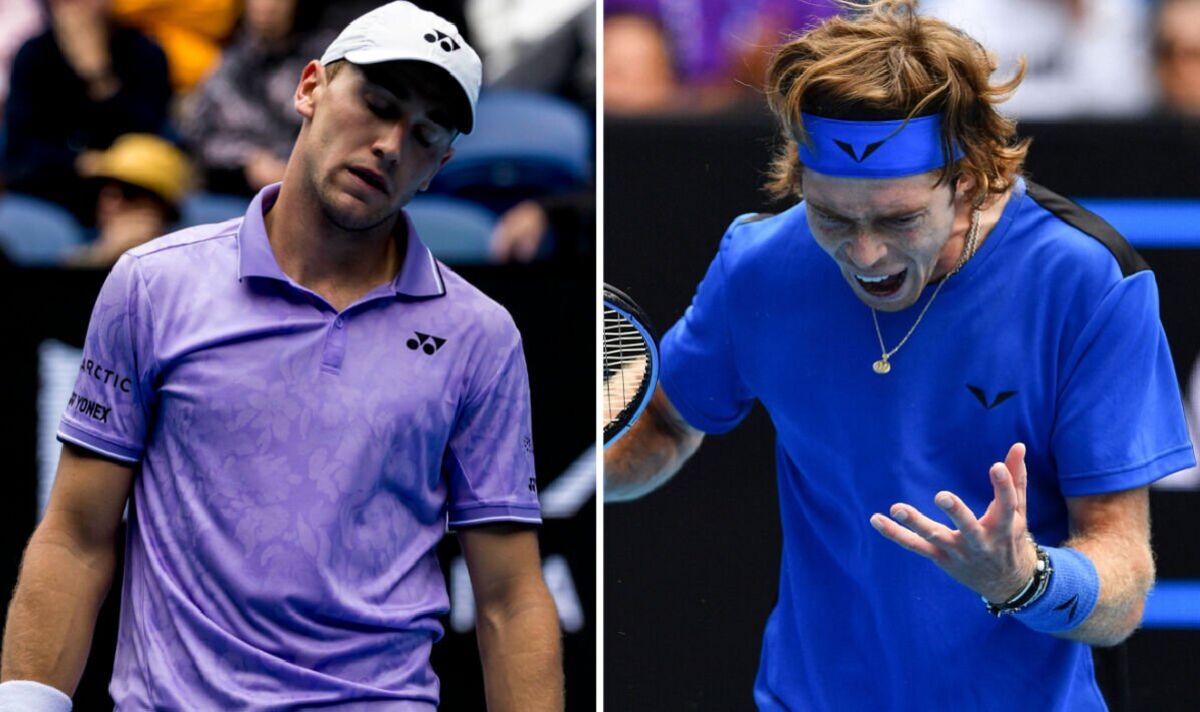 Australian Open No 2 seed Casper Ruud has followed Rafa Nadal out of the men’s singles to see the top two male seeds beaten this early here for the first time in 21 years. While elsewhere Dan Evans and his next opponent Andrey Rublev were involved in rules rows on a heated fourth day.

Temperatures were down to 16 degrees after play was stopped due to the extreme heat rule earlier in the week. But that did not stop Jeremy Chardy getting hot under the collar about a controversial call during his straight-sets defeat to the British No 3.

And Rublev also unleashed an X-rated rant against the umpire after being accused of swearing in Russian. Otherwise a Belarussian is in form to win her first Grand Slam title and Denis Shapovalov had a different view than Cam Norrie on drunken fans watching his victory.

The French Open and US Open finalist saved three match points at 3-5 in the 83-minute third set against world No 39 Jenson Brooksby. But the American composed himself to win 6-3 7-5 6-7 6-2 to reach the third round on his Australian Open debut.

Brooksby, 22, finally took his fifth match point for the biggest win of his career when Ruud looped a backhand long after three hours and 55 minutes in the Rod Laver Arena.

Top seed and defending champion Rafa Nadal went out to American Mackenzie McDonald yesterday. It is the first time since Gustavo Kuerten and Lleyton Hewitt went out early in 2002 that both male top seeds have failed to reach the third round here.

The British No 3 called for a change in the “worst rule ever” after his furious French opponent accused the chair umpire of “lying” over a controversial call. Jeremy Chardy went ballistic when a ball fell out of his pocket on a break point and German chair umpire Miriam Bley called a let after the point – and then reversed her decision.

The London-based Frenchman accused the German of making “the biggest mistake of the Australian Open”. And when the supervisor was called, Chardy accused Bley of “lying” over her version of events.

No 25 seed Evans kept his cool on Court 3 to win 6-4 6-4 6-1 to set up a third-round meeting with No 5 seed Andrey Rublev. The British No 3 Evans said: “I think the rule should be if a ball comes out of your pocket, you lose the point.

“I don’t know why you’re giving people the chance. I think it’s the worst rule ever. He missed the ball. If a ball comes out of your pocket, it’s your own fault.” The flashpoint happened when Evans had a breakpoint at 3-3 in the first set.

When Bley explained her decision to Chardy, the Frenchman exploded with rage. “We play with someone who cannot umpire,” he said. “In my life, 20 years I’ve had one umpire bad like you.”

When the supervisor told Chardy that it was “the umpire’s call” after she explained her decision, the French left-hander ranted: “If you don’t confirm that I called let, I lose all respect for you.

“She’s lying. Can she have a fine? When we do something bad, we are fined. It’s a huge mistake. We play with someone who cannot umpire.”

Andrey Rublev set up a third-round showdown with Evans by winning 6-2 6-4 6-7 6-3 against Finn Emil Ruusuvuori. But the world No 6 lost his temper when he was given a code violation by the chair umpire for swearing – in Russian – when facing a break point in the third set.

Rublev responded: “Are you from Russia? Do you speak Russian? You have to take this back. There are so many similar words.” The umpire said he had understood the word to have been swearing.

“So now you are telling me this, I’m understanding ‘f*** you. It’s exactly the same. So why you don’t give me warning now when I say f**k you? That’s what I hear.”

Rublev was break point down in the third set having won the first two when it all kicked off.

Sabalenka could serve up a Belarussian win

Russian-born Elena Rybakina won Wimbledon even though Russian and Belarussian players were banned. And No 5 seed Aryna Sabalenka has the game to win her first Grand Slam for Belarus after solving her service woes.

The US Open semi-finalist won the recent Adelaide International without dropping a set and extending her 2023 unbeaten run to six match by beating American Shelby Rogers 6-3 6-1 in 87 minutes.

Last year Sabalenka suffered the service yips with a slew of double faults before going out in the fourth round. But this time she served only three doubles faults in the first round and none today.

“Oh, my God, I did I think almost everything to trying to fix my serve,” she said. “Like, the whole year we were trying different things mentally, mental stuff, technique, technical, trying to breathe differently. I tried a lot.”

Cam Norrie laughed off a rowdy atmosphere on Court 13 late on Wednesday after three English fans were ejected for chanting: “You’re just a **** Andy Murray!” But Denis Shapovalov was less amused by drunken fans over in the 1573 Arena – a court named after a Chinese alcohol sponsor.

The Canadian told the umpire: “They don’t need to be doing that. They had a beer too much and now they’re fooling around, you know? I understand but it’s excessive.” The No 20 seed then told a heckling fan to “shut up” before beating Taro Daniel of Japan in straight sets.

Nick Kyrgios setted a legal case by making a donation to charity after claiming a female fan “had about 700 drinks” during the Wimbledon final.

Denial of responsibility! NewsUpdate is an automatic aggregator around the global media. All the content are available free on Internet. We have just arranged it in one platform for educational purpose only. In each content, the hyperlink to the primary source is specified. All trademarks belong to their rightful owners, all materials to their authors. If you are the owner of the content and do not want us to publish your materials on our website, please contact us by email – [email protected]. The content will be deleted within 24 hours.
Ausbest sports newsFeelNadalnews update sportsnewsupdateOpenRuud

iPhone, iPad, Mac and more on attractive discounts at Apple Store online: How to claim | Digit

Sony to increase supply of PS5, teases 2023 game lineup and…