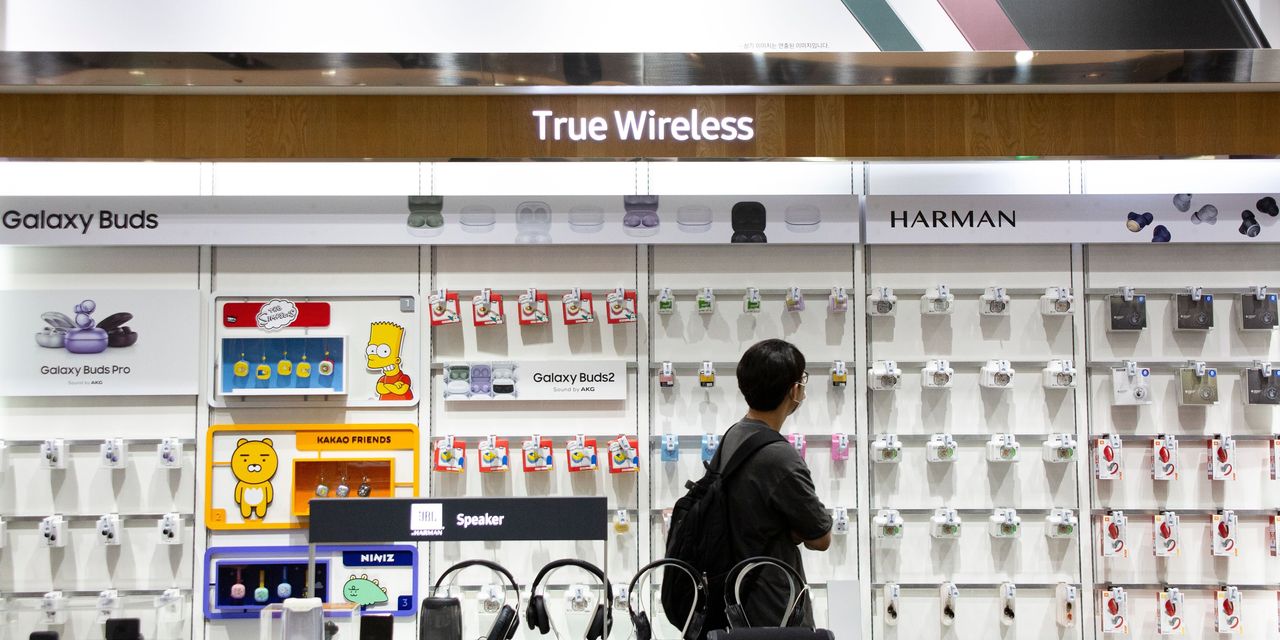 is starting to feel the sting of rising inflation and weakening demand for electronics and the chips that go inside them.

The South Korean tech giant on Thursday reported revenue of 77.2 trillion won, or the equivalent of about $59 billion, for the three months ended June 30. That represented a 21.6% rise from the year-ago quarter but a slight pullback versus the opening three months of the year when Samsung posted record-high revenues of 77.8 trillion won.

Samsung, the world’s biggest maker of semiconductors, smartphones and televisions, said its net profit for the second quarter rose 15.3% from the year-ago period to 11.1 trillion won.

The Suwon, South Korea-based company is considered an industry bellwether as it is a major electronics maker as well as a component supplier for major tech companies such as Apple Inc.

which compete with Samsung in the memory-chip business, said in their latest earnings calls that rising inflation and concerns over a recession had affected consumer confidence recently and prompted customers—which includes PC and smartphone manufacturers—to start tightening costs and adjusting inventories. On Thursday, Qualcomm Inc., which makes chips for phones, lowered its handset shipment forecast for the year.

But not all of the chip industry is pessimistic. Earlier this month,

gave an upbeat revenue forecast based on robust sales of chips produced for core customers in the industrial machinery and auto industries.

Industrywide semiconductor revenue is projected to grow 7.4% this year, a sharp slowdown from 2021’s rise of 26.3%, according to

a market research firm. Gartner had previously projected the chip industry would grow nearly 14% this year.

Samsung’s earnings are driven primarily by memory chips. Prices of the two major types of memory—DRAM and NAND flash—are declining as electronics demand for PCs, smartphones and other gadgets weaken. They are each expected to fall by double-digit percentages in the coming months versus the prior year, according to forecasts from Taiwan-based TrendForce.

For the April-June period, Samsung benefited from a strong U.S. dollar and ongoing server demand for memory, though the rate of revenue growth cooled versus prior quarters. The company’s second-quarter semiconductor division operating profit rose 44% from the prior year to 9.98 trillion won, while revenue increased 24% to 28.5 trillion won during the same time frame.

Samsung saw lower-than-expected shipment volumes for its memory chips during the second quarter, said Han Jin-man, executive vice president of the company’s memory business, on an earnings call. The South Korean firm would give priority to its existing inventory to meet demand going forward, he added, without signaling dramatic moves to increase or slow down capacity expansion.

“The best approach we can take is to not be too optimistic or too pessimistic about the memory market,” said Mr. Han, noting chip demand for servers had been less affected by geopolitical factors.

The company said its mobile business took a hit from rising material and logistics costs, but revenue rose, driven by sales of premium devices. Samsung’s mobile-and-networks division logged second-quarter operating profit of 2.62 trillion won, a 18.9% drop from the prior year. But revenue rose 29.4% year-over-year to 29.34 trillion won.

The South Korean tech giant reduced its expectations for industrywide smartphone shipments for the year. In April, the company expected growth. Now, it anticipates shipments to be flat or experience minimal growth amid a “shrinking market,” said Kim Sung-koo, vice president of the company’s mobile division.

Samsung is preparing to launch a new version of its flagship foldable smartphones—the brand’s priciest models—on Aug. 10. Last year, the Galaxy Z Fold 3 5G was launched at roughly $1,800 while the smaller-size Galaxy Z Flip 3 5G was priced at around $1,000. The company expects some resilience in higher-priced, premium devices, Mr. Kim said.

Denial of responsibility! NewsUpdate is an automatic aggregator around the global media. All the content are available free on Internet. We have just arranged it in one platform for educational purpose only. In each content, the hyperlink to the primary source is specified. All trademarks belong to their rightful owners, all materials to their authors. If you are the owner of the content and do not want us to publish your materials on our website, please contact us by email – [email protected]. The content will be deleted within 24 hours.
005930.SEappliancesAudioAudio/Video Equipmentbest technology newsC&E Industry News FiltercomputersComputers/Consumer Electronics