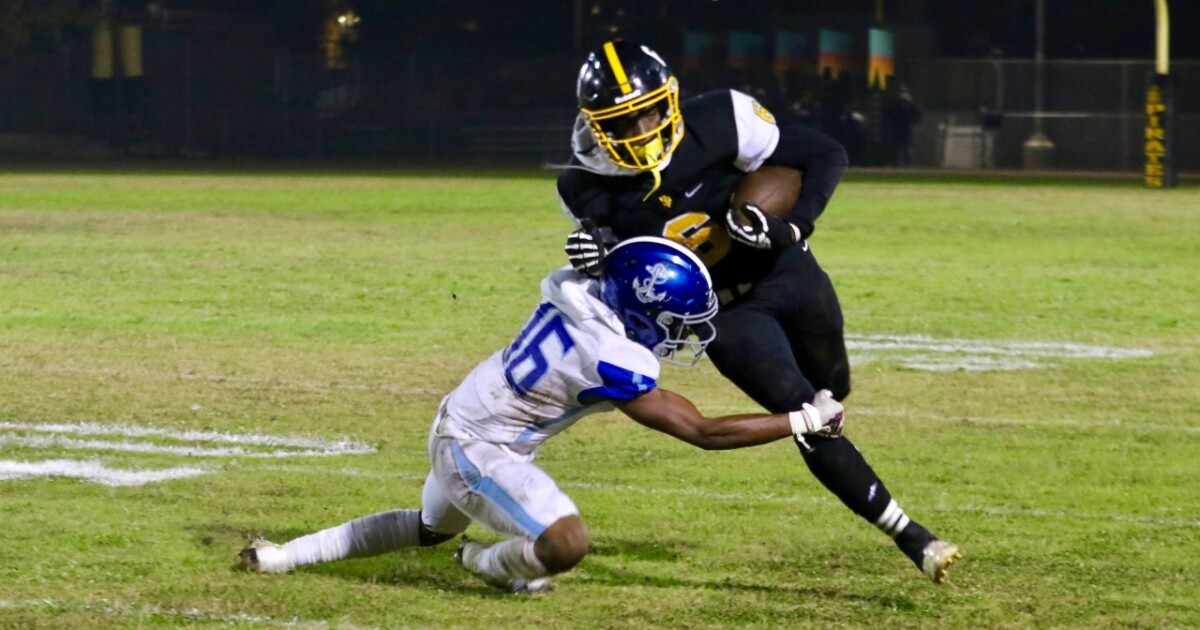 In a game featuring two high-powered offenses, it was defense that dominated for most of the night, and it helped San Pedro grind out a 33-17 victory over Palisades in a City Open Division semifinal Friday at San Pedro High.

San Pedro will play defending champion Birmingham for the City championship next Saturday night at Pierce College in Woodland Hills.

The Pirates recovered two fumbles and intercepted Palisades quarterback Sammy Silvia three times, the last of which Kejuan Bullard returned 40 yards to the Dolphins’ 23-yard line in the fourth quarter. On the next play, Aidan Jackson found Chris Nixon in the end zone for a touchdown to give San Pedro a 33-17 lead.

Second-seeded San Pedro (10-1) stopped Barrett Gordon inches short on fourth-and-two at the Dolphins’ 49-yard line early in the fourth quarter leading by 10. On the next play, Bullard was free down the sideline but dropped what could have been atouchdown catch.

However, the Pirates capitalized on their next possession when Jackson threw a 22-yard touchdown to Robert Sarmiento to increase the lead to 27-10.

After linebacker Kain Parris returned an interception 20 yards to midfield on Palisades’ fourth offensive play, the Pirates marched 49 yard in seven plays, scoring on a nine-yard run by Christian Phillips to take a 7-0 lead.

Late in the first quarter, Elijah Thorp picked off another pass by Silvia and returned it 34 yards for a touchdown, but the ensuing extra point was blocked.

Third-seeded Palisades (11-1) responded with a five-play, 72-yard drive, scoring on a three-yard run by Josh Russell. It marked the first points San Pedro had allowed in 17 quarters.

A shanked punt gave Palisades the ball at the San Pedro 16-yard line, but the Pirates’ defense held and a 19-yard field goal by Giovanni Ferrero pulled the Dolphins to within 13-10 midway through the second quarter.

Nixon caught a 35-yard touchdown pass from Jackson to increase the Pirates’ lead to 20-10 before halftime.

Palisades crept to within 27-17 early in the fourth quarter on a three-yard run by tailback Daniel Anoh, who entered the game having rushed for 1,367 yards and 20 touchdowns.

Palisades had won a school-record 14 straight games going back to the spring season.

Denial of responsibility! NewsUpdate is an automatic aggregator around the global media. All the content are available free on Internet. We have just arranged it in one platform for educational purpose only. In each content, the hyperlink to the primary source is specified. All trademarks belong to their rightful owners, all materials to their authors. If you are the owner of the content and do not want us to publish your materials on our website, please contact us by email – [email protected]. The content will be deleted within 24 hours.
best sports newsforcesnews update sportsnewsupdatePalisadesPedroSansports news