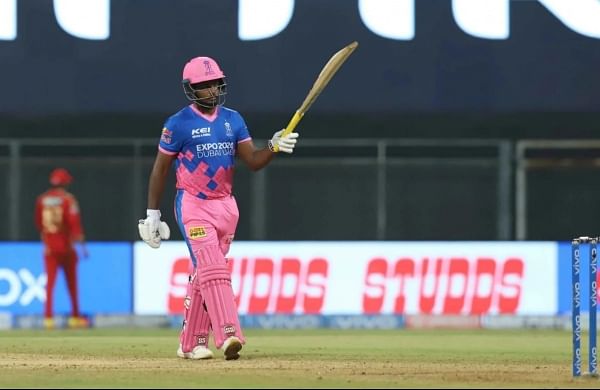 CHENNAI:  Among batsmen who scored a minimum of 300 runs in the 2020 edition of the IPL, only Nicholas Pooran (169.71) had a higher strike-rate than Sanju Samson’s 158.89. In those, only Ishan Kishan, with 30 sixes, had more than Samson’s 26. And not a single batsman had fewer boundaries than the Rajasthan Royals captain (21). It illustrates Samson’s propensity to go for big shots.

Before Kishan and Rishabh Pant arrived, Samson batted with more license in T20s. A sort of territory which was yet to be adapted by Indians. Samson’s batting is all about timing. He rarely muscles the ball like the other two. He mostly sticks to his range between cover and fine-leg. The laps, reverse-laps are yet to be added to his armoury. But he has seldom required them, thanks to his natural ability to clear the ropes.In the lead up to the T20 World Cup, where Samson is fighting for a spot with Pant, Kishan and KL Rahul, he has started this year’s edition in a manner only he can.

His 119 nearly won the game for Rajasthan against Punjab Kings, but as the dust settled, there is one question that lingers on everyone’s lips. Can Samson be consistent? Going by his IPL numbers, he hasn’t. An average of 28.76 in 108 matches is not enough for a player who is capable of more. His technique has never been an issue. However, it is the execution and one-dimensional approach irrespective of the pitch — that has been Samson’s biggest undoing. At Wankhede, he played his natural game, but as he moves to Chennai, Delhi, Ahmedabad, Kolkata and Bengaluru, he has to find other alternatives.

Samson is no stranger to the aforementioned question. In 2019, during the middle of the domestic season, he said, “I’m happy to score double hundreds every 10 innings rather than 40s and 50s.” And two years later, he still seems to live by it. The only frustrating part of watching Samson bat is you don’t know which is his off day, but they have been way too frequent. Each IPL season, he has the habit of beginning with a bang, only to fizzle out in the end. The last edition was an exception, which came sandwiched between his T20 appearances for India in New Zealand and Australia, where he totalled only 58 runs in five matches, before losing his spot for the England series at home.

For all the firepower he brings to the table, his inconsistency is bound to test his patient levels. At Rajasthan, Samson hasn’t had a chance to worry about it, but at international level, it matters. Being the captain of Rajasthan, it provides him an opportunity to alter his game. “I know when you start off with a bang, you always want to talk about consistency, but the real key is to understand it defers from game to game… it is about constructing an innings on a new day. When he keeps those thought processes simple, there is nothing else for him to worry in terms of technique or execution,” Kumar Sangakkara, Rajasthan Royals’ director of cricket said at the end of Tuesday’s match.

Sunrisers Hyderabad
It is still early days, but David Warner’s form is already a cause of concern. Since coming back from a hamstring injury during the India series, the opener has struggled for runs. This aside, if Kane Williamson is available for selection, expect them to make  a change, but at whose place is the question. Having lost the opener, the conditions at Chepauk provides SRH an opportunity to quickly bounce back.

Royal challengers bangalore
Having beaten Mumbai, the momentum is with Bangalore. How they will maintain it is the question. Unlike previous editions, they seem to have the combination to keep delivering winning result. If Devdutt Padikkal is  fit, Bangalore will bring him back into the XI. In that case expect Shahbaz Ahmed to make way and Washington Sundar slotted in the middle-order.

Denial of responsibility! NewsUpdate is an automatic aggregator around the global media. All the content are available free on Internet. We have just arranged it in one platform for educational purpose only. In each content, the hyperlink to the primary source is specified. All trademarks belong to their rightful owners, all materials to their authors. If you are the owner of the content and do not want us to publish your materials on our website, please contact us by email – [email protected]. The content will be deleted within 24 hours.
bangbest sports newsbigIPLIPL 2021news update sportsnewsupdateSamsons

Yonex-Sunrise India Open 2021 set for May, to be held behind closed doors

Upbeat Royal Challengers have the edge over the Royals

Culture and Beach Holidays in Egypt