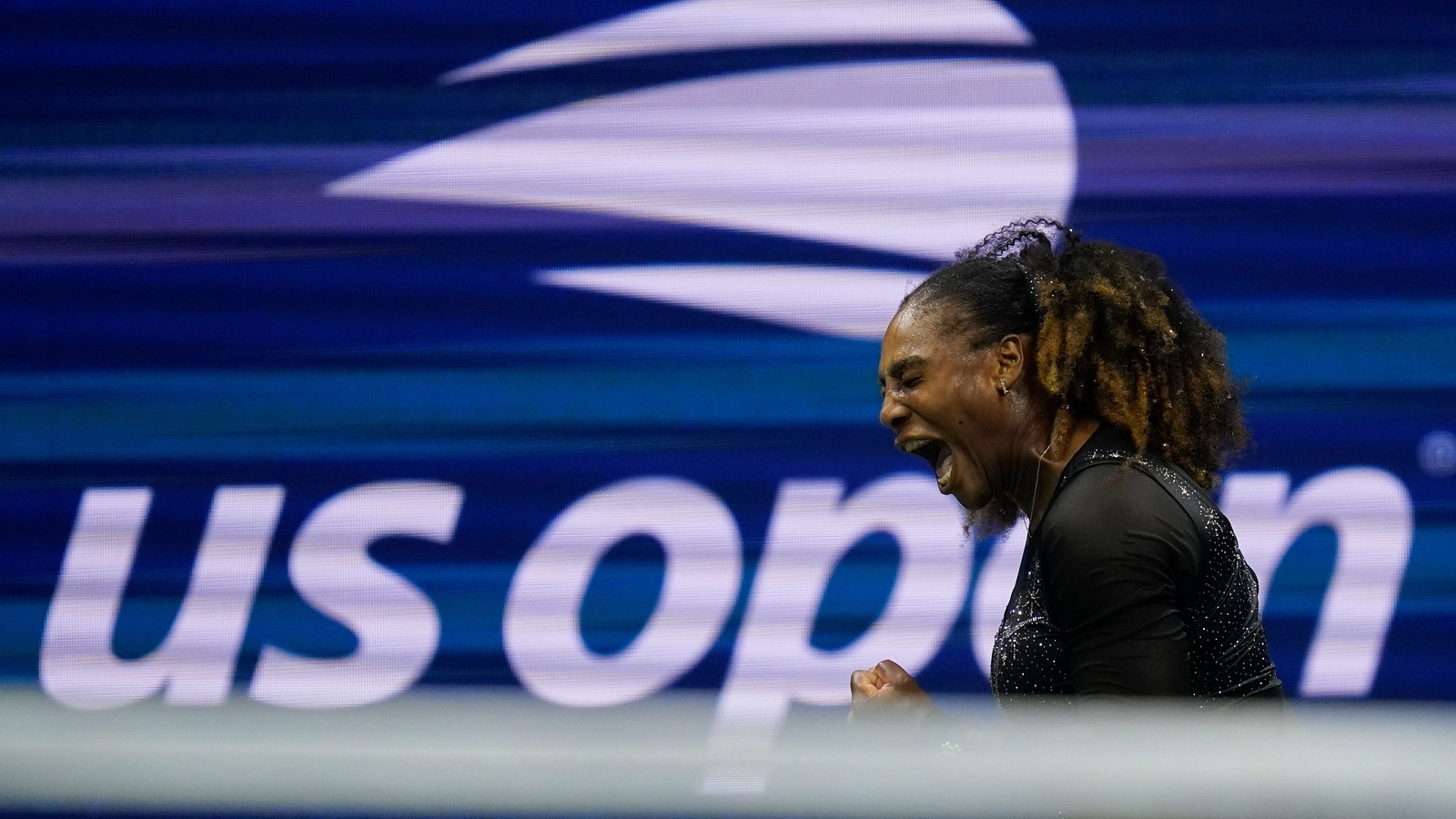 Dressed in a black, diamond-studded outfit, Serena walked into the 2022 US Open’s opening night session introduced as the “greatest of all time” after a video montage by Queen Latifa on the 23-time Grand Slam champion’s legacy. By then, her opponent, Danka Kovinic had already checked into the Arthur Ashe Stadium, and so did the record 29, 402 spectators waiting for the “Queen of the Court”—as one banner read—to mesmerize them for perhaps the last time there.

It didn’t matter, really. The US Open organisers still went ahead with a post-match celebratory ceremony for their most revered champion, six times at that. As Serena sat on her chair, Billie Jean King gave her early impressions of a six-year-old Serena in an on-court speech while Oprah Winfrey narrated a video tribute thanking her on behalf of “all of us”.

Serena spoke herself, posed for a family picture with her husband and daughter Olympia—sporting white hair beads, a la her mother during her first US Open title in 1999—and watched the formation of giant “We love Serena” placards across the arena. The match result more a footnote, the farewell bash for Serena was being played out in full splendor.

The American won her first round that carried the feel of her last act, beating Montenegrin Danka Kovinic 6-3, 6-3. It was just her second singles victory this season since coming back from a year-long absence for the Wimbledon, and kept her unblemished first-round record in New York (21-0). The 40-year-old will walk out alone again at the Arthur Ashe Stadium—Serena is also playing doubles this US Open alongside sister Venus—for another crack at an increasingly rare win in the second round against the second-seed Anett Kontaveit.

“At this point, honestly, everything is a bonus for me,” Serena said in the post-match press conference, her first since announcing her decision to “evolve” from tennis in a Vogue article earlier this month.

Since then, every Serena move has carried a prefixed farewell term. Stepping on the court hours after the article was published, Serena had been overpowered emotionally in Toronto, breaking down after her opening-round exit. Multiple that evening by sheer volume of people and magnitude of occasion on Monday night in New York.

“When I walked out, the reception was really overwhelming. It was loud. I could feel it in my chest,” Serena said.

That she was in a scratchy battle with the world No. 80. The Serena serve lately has been nowhere near the destructive force it once was, and the two back-to-back double faults in the opening game brought that to the fore again. Yet after saving a couple of break points, the crowd favourite got the early break by running down to a ball before standing tall at the net. The fist bump was out. The emotions could wait. There was tennis to be played.

The serve, though, just wasn’t holding the fort. Serena dished out five double faults in the opening set, one of which immediately handed Kovinic the break back and soon the lead. Something changed in the sixth game after a mishit backhand return winner by Serena that got her level again. From there on she whisked ahead, holding to love and then breaking Kovinic, whose own service troubles began cropping up, also to love. After saving a fourth break point with a trademark curling ace down the T, Serena closed out the set with an unreturned serve and a reverberating “C’mon”.

By no means was it classic Serena, yet there were the odd flashes of yore—like when she pounced on a high, loopy return by rushing to the net and crushing the ball away in the first set or when she cracked a backhand return winner on the rise to a feeble serve in the second. As Serena’s serving strength and solidity grew—she had three unreturned serves in a hold to love for 5-3—there was no way back for Kovinic in the second set after being broken in the fifth game.

Serena hasn’t explicitly stated that this US Open would indeed be her final tournament, even though she did whole-heartedly play along in the on-court advanced goodbye ceremony. “Yeah, I’ve been pretty vague about it, right?” she told reporters. “I’m going to stay vague, because you never know.”

You never know what’s in store for her in the second round, tennis-wise and farewell feels-wise. What is certain, however, is that there’s at least one more Serena singles match to savour.

“Tonight was all surprise, actually, towards the end,” she said of the ceremony. “I didn’t know any of that was happening. I was just ready to do the on-court interview and leave.”

Not so soon, Serena.

Denial of responsibility! NewsUpdate is an automatic aggregator around the global media. All the content are available free on Internet. We have just arranged it in one platform for educational purpose only. In each content, the hyperlink to the primary source is specified. All trademarks belong to their rightful owners, all materials to their authors. If you are the owner of the content and do not want us to publish your materials on our website, please contact us by email – [email protected]. The content will be deleted within 24 hours.
Bashbest sports newsfarewellnews update sportsnewsupdateSerena Williamsserena williams retirementSerena Williams US Open

Why owning your own business software is a gamechanger