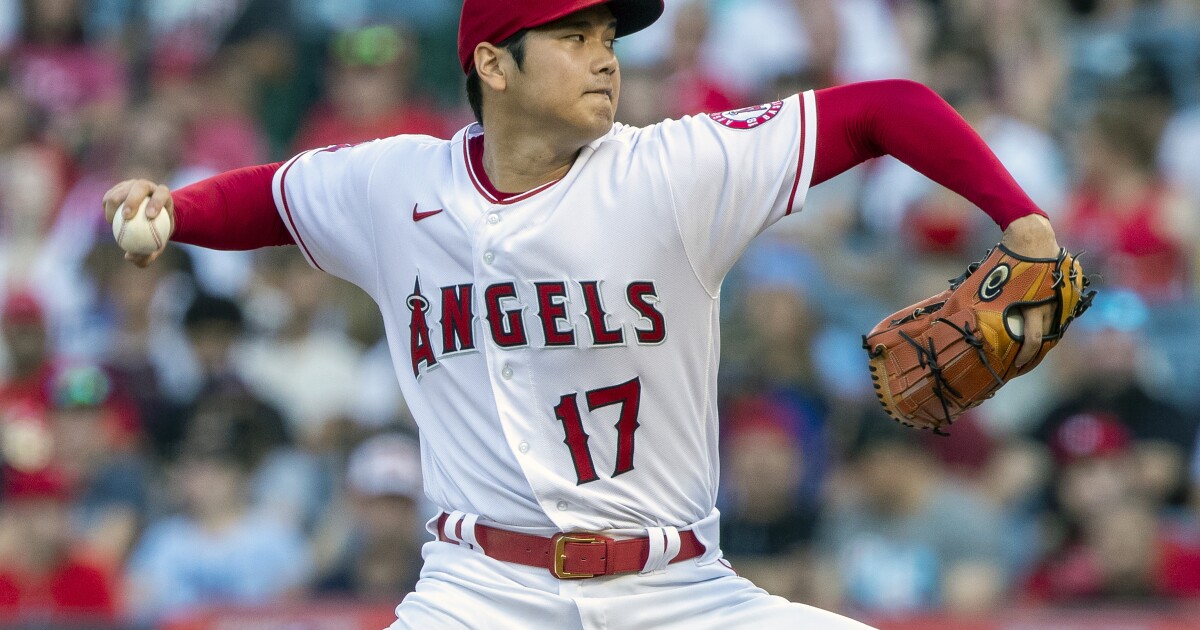 Shohei Ohtani’s outing against the Texas Rangers wasn’t his strongest compared to what he’s been able to accomplish thus far in his career. It was still a quality start, but included a bit more traffic on the basepaths than he’s yielded over the last two months.

Through six innings on Thursday at Angel Stadium, Ohtani gave up eight hits and two earned runs, including a home run, but also struck out 11 en route to his team’s 2-0 loss to a division rival. It was his sixth-straight start with 10 or more strikeouts, his major-league leading ninth such start overall this season.

Ohtani struggled with his first three batters of the game, giving up three straight hits to load the bases.

Marcus Semien, his first batter of the game, reached first base on a single hit to the newly returned David Fletcher. Fletcher dove to smother the grounder as it crossed into the outfield grass behind second base, but as he rose to his knees to try to make the throw at first, he accidentally flicked the ball away from him.

Corey Seager and Jonah Heim, his next two batters, both reached on line drives into the outfield.

Then it started to click. Ohtani needed five pitches each to get rid of Nathaniel Lowe and Adolis Garcia.

“Shohei” chants broke out from a group of children sitting in the Lexus Diamond Club as his next batter, Leody Taveras, stepped into the box. And three pitches were all he needed to end the inning without letting a single Ranger score.

He flexed his arm and pumped his fist to the sky in celebration of his victory in the short battle.

But Ohtani needed to grind through the rest of his night and received no run support from the Angels’ offense.

He pitched a 1-2-3 second inning and a mostly clean third inning, then got tagged with a solo home run in the fourth.

He then struck out his next three batters.

In the fifth inning, two hits, a single by Josh H. Smith and a double by Seager, would give the Rangers another run. Ohtani capped his night after Lowe tripled off of him, but no additional runs scored as Ohtani struck out his next two batters, Garcia and Taveras, then got Kole Calhoun to fly out.

The Angels’ offense all game was able to get some exciting extra base hits, but none equated to a run tallied on the scoreboard.

Luis Rengifo got the crowd excited with a triple that rolled along the left corner of the outfield wall in the first inning. His hit, which came off Rangers starter Spencer Howard, at first looked as if it would just be a double. When Smith was still bumbling around that corner, still not in control of the ball, Rengifo rounded second and made a break for third.

He was left stranded that inning, and then again in the sixth, when he hit a double to center field. As were Fletcher, in the third, and Brandon Marsh, in the fifth.

Fletcher’s double came on his first at-bat of the game and was his first big league hit since May 6 — two days before he landed on the injured list.

Rengifo also singled in the ninth inning, coming just a home run shy of hitting for the cycle.

Denial of responsibility! NewsUpdate is an automatic aggregator around the global media. All the content are available free on Internet. We have just arranged it in one platform for educational purpose only. In each content, the hyperlink to the primary source is specified. All trademarks belong to their rightful owners, all materials to their authors. If you are the owner of the content and do not want us to publish your materials on our website, please contact us by email – [email protected]. The content will be deleted within 24 hours.
Angelsbest sports newsExtendsnews update sportsnewsupdateOhtaniRangersShohei