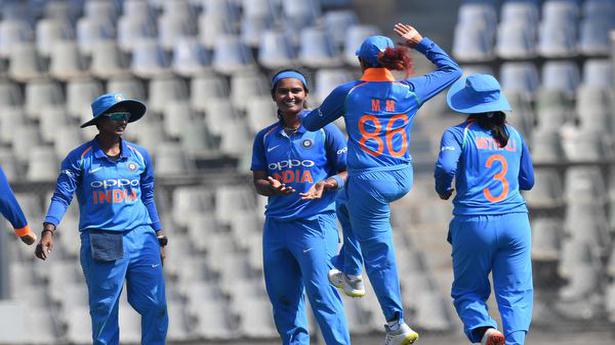 The ball pitched somewhere around the imaginary sixth stump, swerved menacingly into the right-hander, and knocked off the off-bail. Wasim Jaffer called it the “ball of the century, women’s cricket edition”.

That ball from Shikha Pandey, to Alyssa Healy in the second T20I, offered an insight into India’s tour of Australia, which came to an end on Sunday. For, that was only Shikha’s second ball on the tour, before the start of which India’s biggest worry had been its pace bowling.

If an experienced, skilled bowler like Shikha could be kept out of the eleven for so long, it means the competition for the pacer’s slot has become stiffer.

The two women who got the nod ahead of Shikha — Pooja Vastrakar and debutant Meghna Singh —certainly justified the management’s faith in them. They formed a formidable trio with veteran Jhulan Goswami in the one-off Day/Night Test.

Coach Ramesh Powar had stressed the need for pacers who could take the pressure off Jhulan. Pooja and Meghna did that, and more.

When you add Renuka Singh, who made her India debut in the T20I series, and Shikha, you have enough pacers to support Jhulan at the 50-over World Cup in New Zealand in March-April next year.

The vast improvement India showed in the pace-bowling department is one of the biggest gains from the Australia tour.

Jhulan (38) may not be able to go on forever, though in the Test and ODIs she proved she was still one of the finest bowlers in women’s cricket. So the performances of the younger seamers should gladden the team management.

The likes of Meghna and Renuka need to be nurtured even as the search for younger talents on the domestic circuit has to continue.

The ease with which Yastika Bhatia took to international cricket shows there is talent to be tapped. Her 64 off 69 balls, in the third ODI, helped India chase down a challenging total and end Australia’s stunning streak of 26 wins.

Find of the tour

With Mithali Raj also not getting any younger, the emergence of the 21-year-old left-hander couldn’t have been better timed. Yastika was perhaps the find of the tour.

The useful runs from wicketkeeper Richa Ghosh and Pooja promise greater depth to the batting.

Talking of batting, the pleasing hundred by Smriti Mandhana in the Test was undoubtedly one of the highlights of the multi-format series.

India may have lost the series 5-11, but that was made up for by some significant gains.

Denial of responsibility! NewsUpdate is an automatic aggregator around the global media. All the content are available free on Internet. We have just arranged it in one platform for educational purpose only. In each content, the hyperlink to the primary source is specified. All trademarks belong to their rightful owners, all materials to their authors. If you are the owner of the content and do not want us to publish your materials on our website, please contact us by email – [email protected]. The content will be deleted within 24 hours.
australiaball of the centurybest sports newsbluegainsIndia women's Women's world cupMithali Rajnews update sports