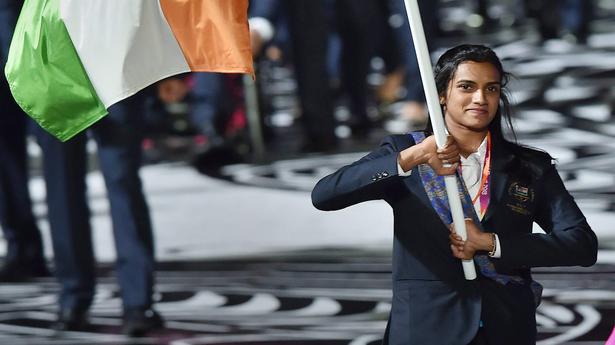 Olympic champion Neeraj Chopra was expected to be the flag-bearer for India at the Commonwealth Games, but badminton star P. V. Sindhu will replace the javelin thrower as he had to pull out due to a groin injury

Olympic champion Neeraj Chopra was expected to be the flag-bearer for India at the Commonwealth Games, but badminton star P. V. Sindhu will replace the javelin thrower as he had to pull out due to a groin injury

Double Olympic medallist badminton ace P. V. Sindhu was on Wednesday named flagbearer of the Indian contingent for the opening ceremony of the Commonwealth Games to be held here on Thursday.

“It’s a great honour to be bestowed with the responsibility to lead the contingent and hold the flag at such an august gathering. I am extremely happy and I wish all my fellow contingent all the best for the Games. I would like to thank IOA also for choosing me as the Flag Bearer,” Sindhu said.

Olympic champion Neeraj Chopra, who was also the defending champion in the Commonwealth Games having won the gold in Gold Coast four years ago, was expected to be the flag-bearer.

But a groin injury following his silver medal at the World Championships forced him to pull out and the Indian Olympic Association picked Sindhu to be the flagbearer from a three-member shortlist.

Tokyo Olympics medallists — weightlifter Mirabai Chanu and boxer Lovlina Borgohain — are the other two athletes, who were also considered before IOA decided to go for Sindhu.

“It’s with great pleasure that we announce P. V. Sindhu as the flagbearer for Team India,” acting IOA president Anil Khanna said in a release.

Sindhu was also the flagbearer at the 2018 Commonwealth Games in Gold Coast.

“The other two athletes, Chanu and Borgohain, were immensely deserving too, but we went ahead with Sindhu because she is a two-time Olympic medallist. We expect Sindhu will continue to do well and perform with excellence at these Games.”

Largest contingent of female athletes ever

The 2022 edition of the Commonwealth Games has the largest contingent of female athletes in the history of the Games.

“So the IOA sensed fit that we spotlight our commitment to gender equity, in adherence to the spirit of the Olympic Charter, by shortlisting three women athletes for the prestigious role of Team India’s Flagbearer at the 2022 Commonwealth Games,” Khanna said.

“We hope that watching Sindhu lead Team India with the Indian flag in her hand at the Opening Ceremony will inspire millions of girls in India to take up sports.”

“We extend our congratulations to her and wish her, and the other athletes of Team India, the very best for the Commonwealth Games,” Mehta said.

164 participants for India at Opening ceremony

Team India Chef de Mission at Birmingham, Bhandari said a maximum of 164 participants can take part from the Indian contingent in the Parade of Nations in the Opening Ceremony.

“The count of 164 will include athletes and team officials. The final list will be drawn up by this evening, gauging the availability of the athletes,” Bhandari said.

A total of 215 athletes from India will be competing at the Commonwealth Games.

A former world champion, Sindhu is one of the favourites to win the women’s singles gold medal in Birmingham, having won the silver and bronze in the last two editions at Gold Coast and Glasgow.

Denial of responsibility! NewsUpdate is an automatic aggregator around the global media. All the content are available free on Internet. We have just arranged it in one platform for educational purpose only. In each content, the hyperlink to the primary source is specified. All trademarks belong to their rightful owners, all materials to their authors. If you are the owner of the content and do not want us to publish your materials on our website, please contact us by email – [email protected]. The content will be deleted within 24 hours.
2022 Commonwealth Games2022 CWGbest sports newsbirmingham commonwealth gamesceremonyCommonwealthCommonwealth Gamesflagbearer

Hogwarts Legacy Release Date, Gameplay, And Everything We Know