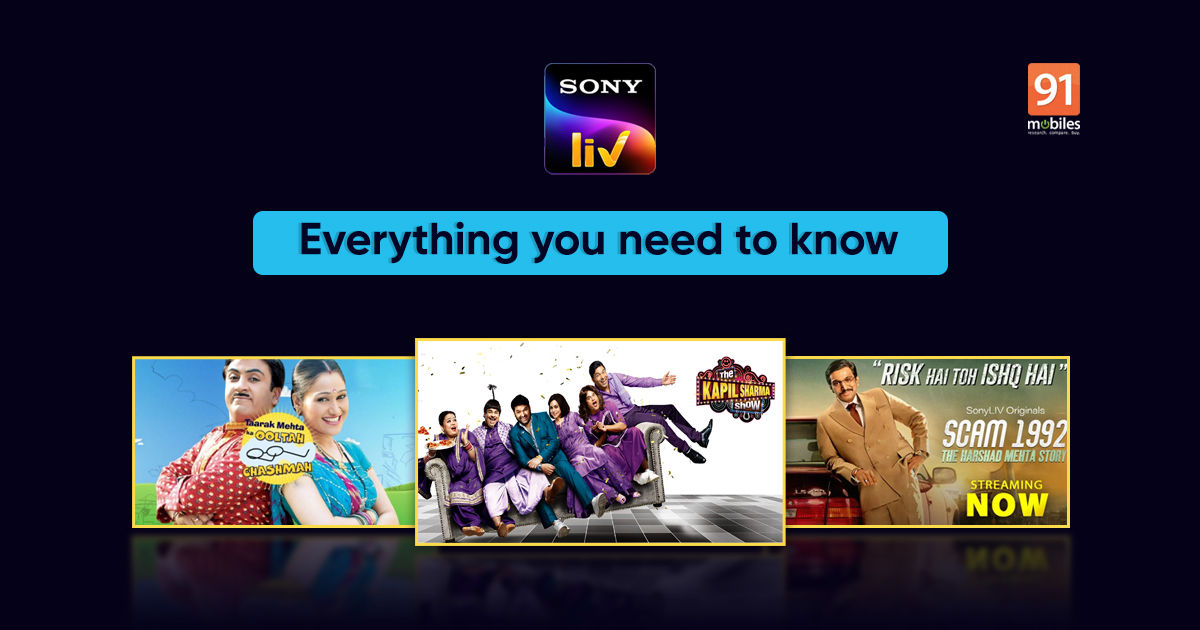 Sony Liv is a video-on-demand service from Sony Pictures Networks India Pvt. Ltd. The catalogue of this streaming platform is different from Disney+ Hotstar, Zee5, Netflix, and Amazon Prime video, among others. SonyLiv titles include original TV shows and movies such as Scam 1992, Sony and SAB TV shows at TV time, exclusive blockbuster movies, Hollywood TV shows, and a wide range of sports content ranging from TEN Sports live TV to packaged telecasts of WWE, UFC, the UEFA Champions League and other sporting events. Most of these contents are behind a paywall that restricts them only to paid subscribers. We’ll be taking a look at the Sony Liv subscription plans – namely price, validity, and benefits – in detail and how to get Sony Liv subscription for free here in this article.

There are as many as four Sony Liv plans in India right now, each with its own set of content and benefits. There is a free membership as well that lets you enjoy select TV shows and movies, including The Kapil Sharma Show and TMKOC, on SonyLiv app and website for free without registration. That said, the free service is ad-supported and doesn’t include live sports, TV channels, and other titles that you get with Sony Liv Premium, Special+, Special, and WWE network plans.

Starting with the Sony Liv premium plan, it’s available with monthly, semi-annual, and annual memberships. These memberships come with similar benefits and catalogue of content, including Live sports, TV channels, Sony Liv original TV shows and movies such as Scam 1992, and Hollywood movies. However, the yearly and six-month memberships support two screens simultaneously, whereas the Sony Liv Premium monthly membership works on just one screen at a time. The plan also supports offline download, up to five profiles, and no ads (except in live TV channels). The SonyLiv Premium monthly membership is priced at Rs 299, whereas the yearly and six-month memberships cost Rs 699 and Rs 999 respectively.

Sony Liv Special+ subscription plan loses a bunch of benefits you get with the premium account such as Live sports and original TV shows and movies, but you do get an ad-free access to Sony and SAB shows at TV time, Indian blockbuster films, and more. If you’re an entertainment nerd, then this Sony Liv plan is the way to go. The fee of this subscription plan is set at Rs 399 a year.

As the name would suggest, the plan is specially curated for WWE fans. Priced at Rs 399 a year, the Sony Liv WWE network plan comprises Live WWE events, NXT, and PPVs, unrestricted access to the entire WWE library, and exclusive WWE series, documentaries, and biographies.

Sony Liv app is available on both Google Play Store and App Store for Android and iOS users respectively. The streaming service also supports web browsers and a number of smart TV OS out there including LG’s WebOS. Sony Liv app is also available for Amazon Firestick.

Sony Liv premium subscription: How to get it for free

Sony Liv subscription is free with Jio’s broadband service JioFiber in India. Users will get free access to Sony Liv’s premium account, which is worth Rs 999, with Rs 999 and above JioFiber broadband plans.

Sony Liv subscription is also available with a handful of offers and discounts. You can avail Myntra, AJIO, and Big Basket discount vouchers of up to Rs 1,000 with Sony Liv Premium yearly membership. Additionally, Flipkart Plus member with more than 250 SuperCoins can use them to get a voucher of SonyLIV. The voucher is only redeemable within 15 days of the claim by going to Sony LIV App or website –> register as new user –> click on ‘Subscribe Now’ and chose 12-month plan –> enter your coupon code and click on ‘Avail Offer’ to get the discount.

Is Sony Liv free with Jio, Airtel, and Vi?

No, Sony Liv subscription is not free with Airtel, Jio, and Vi connection. However, you can watch a number of Sony channels, including Sony Six, Sony Ten 3, Sony Max, and Sony Pix, live on the Jio TV app.

How many screens does Sony Liv support at a time?

SonyLiv subscription supports up to two screens at a time. This is only true with the Liv Premium annual and semi-annual plans. All other Sony Liv subscription plans support only one screen. The OTT service works on almost every device out there, including desktops, Android/ iOS-powered devices, Android/ webOS TVs, and Fire TV Stick.

As long as it’s not a live show, you can download and save pretty much every Sony Liv content on your device.

The streaming service shows ads to customers only in live sports and TV, and with Sony Liv Special monthly plan.

Absolutely not! The payment once made will not be reverted even if you are not using a Sony Liv subscription. Additionally, these plans cannot be transferred, so be careful while making the payment for the plan.

How to cancel Sony Liv subscription

Can you upgrade Sony Liv plan?

Yes, you can upgrade SonyLiv plan from WWE, Special and Special+ to Premium by paying the sum that you would get after deducting the amount of your previous subscription plan from the Premium plan.

Denial of responsibility! NewsUpdate is an automatic aggregator around the global media. All the content are available free on Internet. We have just arranged it in one platform for educational purpose only. In each content, the hyperlink to the primary source is specified. All trademarks belong to their rightful owners, all materials to their authors. If you are the owner of the content and do not want us to publish your materials on our website, please contact us by email – [email protected]. The content will be deleted within 24 hours.
91mobilescombest technology newsDiscountsIndiaLivNewsnews update technewsupdate