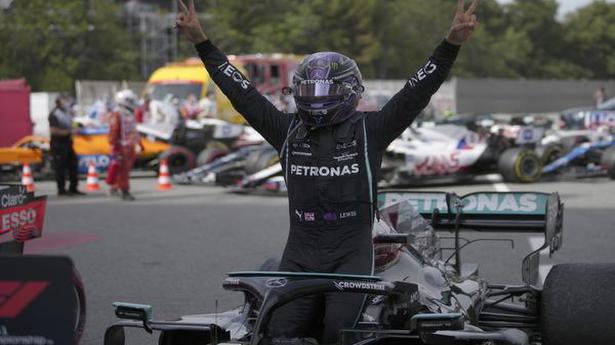 Spanish GP | Make that 98 and counting for Hamilton!

Seven-times World champion Lewis Hamilton hunted down “sitting duck” Max Verstappen to win the Spanish Grand Prix for a record-equalling fifth year in a row on Sunday and go 14 points clear at the top.

Hamilton’s 98th victory, from his 100th pole, was his third in four races as he and Mercedes played the strategy to perfection after Red Bull’s Verstappen had muscled into the lead at the first corner.

The Briton pitted for fresh tyres and was set the task of closing a 22 second gap to Verstappen in 23 laps at the Circuit de Catalunya.

He did it in style, sweeping past to take back the lead with six laps to spare in a re-run of his epic chase of his Dutch rival at the 2019 Hungarian GP. “I was just hunting,” said Hamilton, the first to win from pole this season and now a six-times winner here.

“It was a long way to come back from 20 odd seconds back but it was a good gamble, a really great strategy from the team… just a remarkable job by everyone in this team. What a day.”

Verstappen, who secured a bonus point for the fastest lap, said he could see it coming.

“There was not much we could have done. They went for another stop and then I knew it was over because I was already struggling with the tyres and you could see every lap he was getting closer and closer.”

Denial of responsibility! NewsUpdate is an automatic aggregator around the global media. All the content are available free on Internet. We have just arranged it in one platform for educational purpose only. In each content, the hyperlink to the primary source is specified. All trademarks belong to their rightful owners, all materials to their authors. If you are the owner of the content and do not want us to publish your materials on our website, please contact us by email – [email protected]. The content will be deleted within 24 hours.
best sports newscountingformula 1 scheduleformula 1 standingsHamiltonLewis HamiltonMax Verstappenmotogp calendar

Apple Music Lossless and Spatial Audio: How to hear the best quality sound