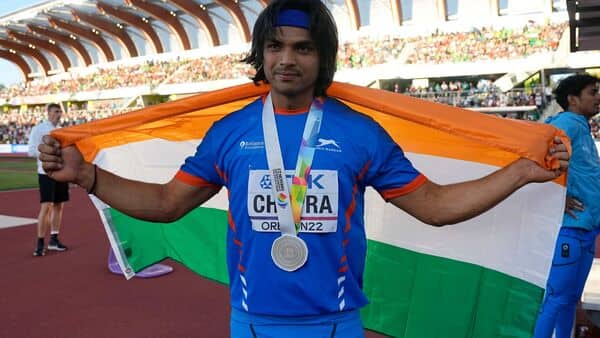 Prime Minister Narendra Modi on Sunday congratulated Olympic champion Neeraj Chopra as he clinched a historic silver in the men’s javelin final with a 88.13m throw finishing in the second position at the World Athletics Championships.

Called it a ‘special moment for Indian sports’, the Prime Minister termed the achievement a ‘great accomplishment’ of ‘one of the most distinguished athletes’ Neeraj Chopra.

Taking to Twitter to congratulate Chopra, PM Modi said, “A great accomplishment by one of our most distinguished athletes! Congratulations to @Neeraj_chopra1 on winning a historic Silver medal at the #WorldChampionships. This is a special moment for Indian sports. Best wishes to Neeraj for his upcoming endeavours.”

Chopra has now become the second Indian and first Indian man to win a medal at the World Athletics Championships.

Legendary long jumper Anju Booby George was the first Indian to win a bronze medal in the World Championships in the 2003 edition in Paris.

Chopra began with a foul throw and had 82.39m and 86.37m to be at fourth after three rounds. He got his rhythm back with a big fourth round throw of 88.13m, his fourth career-best effort, to jump to second place, which he held on to till the end. His fifth and sixth throws were fouls.

Chopra had topped the Group A qualification round and qualified for the final at second place behind Peters by sending his spear to 88.39m for his third career-best throw. Peters had topped Group B with an effort of 89.91m.

Earlier in June, Chopra had also set a new national record with an opening throw of 89.94m at the Stockholm Diamond League.

Chopra, only the second Indian to have won an individual gold in the Olympics after shooter Abhinav Bindra, who clinched the yellow metal in 2008 Beijing Games, had won Indian athletics’ maiden gold in the Tokyo Olympics last year.

Denial of responsibility! NewsUpdate is an automatic aggregator around the global media. All the content are available free on Internet. We have just arranged it in one platform for educational purpose only. In each content, the hyperlink to the primary source is specified. All trademarks belong to their rightful owners, all materials to their authors. If you are the owner of the content and do not want us to publish your materials on our website, please contact us by email – [email protected]. The content will be deleted within 24 hours.
best sports newsChopracongratulatesIndianmenModimomentNeeraj