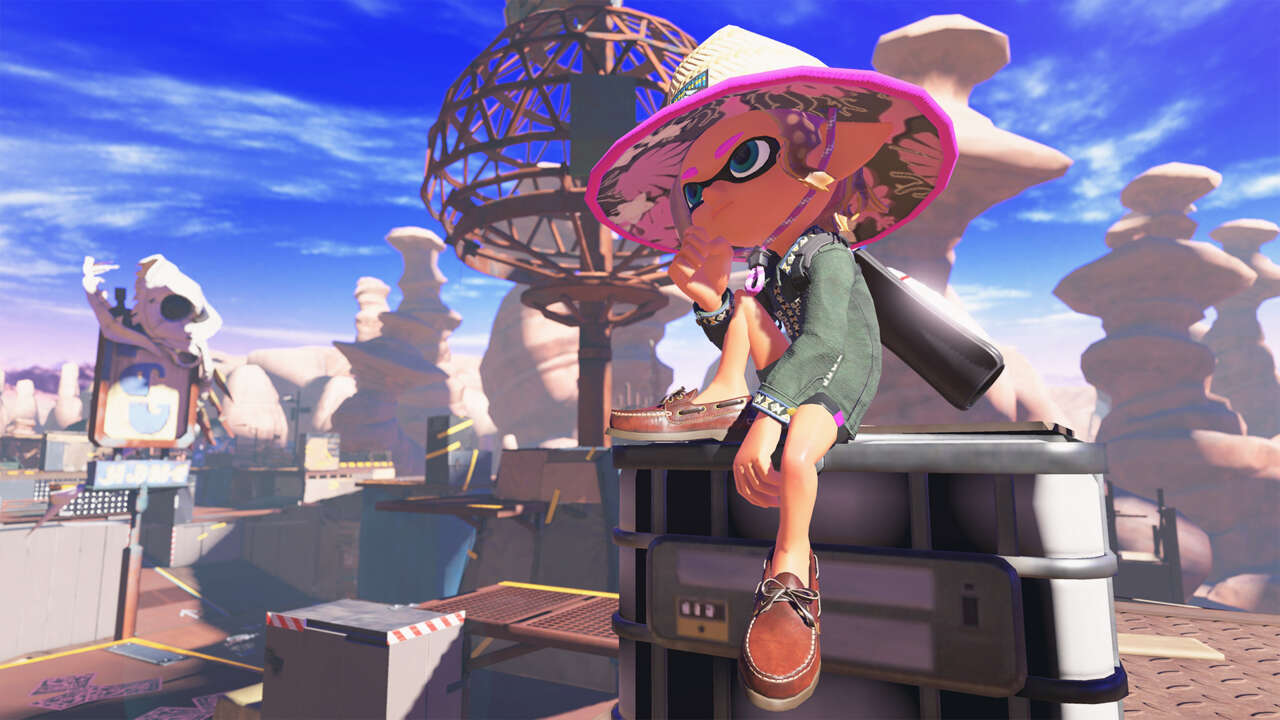 A kid-friendly competitive multiplayer shooter was a strange concept when Nintendo introduced the very first Splatoon. The unique zone-control mechanics made combat important but somewhat incidental to the chief goal of covering everything in sticky goop. Painting the battlefield gave an immediate and intuitive visual sense of who’s winning and losing without the need for a clunky scoreboard. That elegant design was the kind of delightful surprise that Nintendo has become known for. After two games and a major expansion, Splatoon 3 serves as a refinement and compilation of everything that came before it. It’s less novel this time around, but it’s still a delight and all comes together as the most robust Splatoon game yet.

Splatoon 3 assumes that you don’t know all of this, of course, starting you off with a short tutorial that teaches you the basics of splatting before dumping you into the main hub area, a new city called Splatsville, in the heart of the desert Splatlands. From there you’re encouraged to explore to learn more about all of the gameplay options and sites to visit, which is a little overwhelming at first. The city isn’t terribly large–it is mostly a hub area for other game modes–but it feels dense with activity and nooks to explore. You can jump into the single-player campaign, co-op Salmon Run, or competitive multiplayer as you please.

The single-player serves as the best starting point for new players, since it gives you more opportunity to hone your splatting skills than the brief pre-Splatsville introduction. It’s much more than a glorified tutorial, though; the campaign is lengthy and makes excellent use of mechanics to iterate and present new types of challenges.

The story follows your created character as the newest recruit in a team of special agents as they explore the island of Alterna, which is said to hold secrets key to understanding this post-apocalyptic squid world. There are some references to previous events and characters, but for the most part, the tale stands on its own. And true to its promise, it actually does explain what happened to humanity. Splatoon fans who have been itching to know why the world is now occupied by hybrid squids and octopuses will be pleased to finally get some answers.

The major thread in the story, though, has less to do with humanity itself and more to do with learning what’s up with a giant, conspicuous rocket covered in fuzzy ooze. Progress through the campaign is achieved by exploring challenge stages, but to reach them, you need to navigate around or through the fuzzy ooze. Falling in will turn you into a Captain Caveman-like creature and result in instant death. Gathering your winnings in the stages can be cashed in to pop pulsating ooze bubbles, which causes a chain reaction to erase some fuzz and open new paths. It’s all nicely elegant, and the system is flexible enough to let you opt out of a stage if it’s giving you trouble and just find another.

The stage design itself shows a tremendous amount of creativity through the sheer variety of different kinds of challenges. The game ventures into bare-knuckle platforming, combat scenarios, and even light puzzle-solving, all without feeling foreign to its core paint-gun mechanic. The one drawback is the enemy design, which does not have enough variety to sustain itself over an 8-10-hour campaign. You’ll find yourself facing off against the same handful of enemy types–with some minor variation–over and over. Despite that, the finale feels like an appropriately monumental conclusion, not just to this game but to the trilogy as a whole. Splatoon 3 amps up the scale of the final encounter to such absurd proportions that I couldn’t help but laugh. It’s also a test of skill unlike anything else in the campaign, which makes it feel both thrilling and also maybe a little bit cheap, given the sudden spike in difficulty.

The city itself, which is the hub for the story mode and the wealth of multiplayer options, can feel overwhelming. There’s a handy shortcut feature in the menu to jump straight into whatever area you want, but it’s also enjoyable to just walk around the city, discovering where everything is. It makes the city feel lived-in and complete in a way that a simple menu might not, even if it’s a bit extraneous. Sometimes the frame rate seemed to drop slightly while I was exploring, though, so my Switch OLED hardware might be having trouble keeping up with the demands of a bustling city.

The traditional competitive mode, Turf War, is as frenetic as ever, pitting two dueling teams against each other for control of a single arena. The new stages that rotated in during pre-release multiplayer sessions fit right into the Splatoon milieu, with slightly more emphasis on verticality in spots to make use of the new Squid Surge maneuver, which lets you shoot up walls quickly. Splatoon has always made great use of cover without exactly being a cover shooter, because getting the drop on opponents behind a corner is so key to success, and the new maps are bursting with hidden alcoves and shortcuts that reward exploring.

To that end, Splatoon 3 feels more like it has thought through its place as a serious competitive game, giving top-tier players more tools to hone their craft. The Recon mode is easier to find if you want to learn the ins and outs of a map before jumping into play competitively. The new lobby system, where you wait between matches, lets you tinker with weapons and see their damage outputs on dummies, which may be helpful for less experienced players to find the one that feels right.

The co-op Salmon Run makes its return as well, now letting you play anytime you like instead of only during pre-scheduled events. As someone who prefers co-op multiplayer to competitive, this is a real highlight for me. Salmon Run is essentially a horde mode, having you take down encroaching waves of angry fish and collecting eggs to advance to the next phase of combat. It can get chaotic as you ratchet up the difficulty, but I haven’t had enough time yet to determine if the mode ends up feeling too repetitive when I can play as much as I want.

And that’s indicative of my overall experience with the multiplayer as well. Nintendo held some pre-release sessions for reviewers to put the game through its paces, but that handful of sessions wasn’t enough time and didn’t take place in a live multiplayer environment. I also haven’t yet had the opportunity to try the card-based minigame Tableturf Battle, though I did find a few packs littered around the single-player campaign, and I’d like to give the new tricolor Splatfests and higher-ranked Anarchy Battles their due as well. It will take more time, post-release, to give these aspects the serious evaluation they deserve. I’ll be continuing to play once Splatoon 3 goes live to form more finalized thoughts.

As it stands, Splatoon 3 is a wildly inventive story campaign paired with a massive amount of multiplayer modes and options, making it the most robust Splatoon game so far. I need more time to put the multiplayer modes through their paces, but the foundation appears strong.

Denial of responsibility! NewsUpdate is an automatic aggregator around the global media. All the content are available free on Internet. We have just arranged it in one platform for educational purpose only. In each content, the hyperlink to the primary source is specified. All trademarks belong to their rightful owners, all materials to their authors. If you are the owner of the content and do not want us to publish your materials on our website, please contact us by email – [email protected]. The content will be deleted within 24 hours.
best games newsgame updategames newsnews update gamesnewsupdatereviewinprogressSplatoon

Patience pays for Saneeth against Sankar

How to configure a DHCP server on Rocky Linux