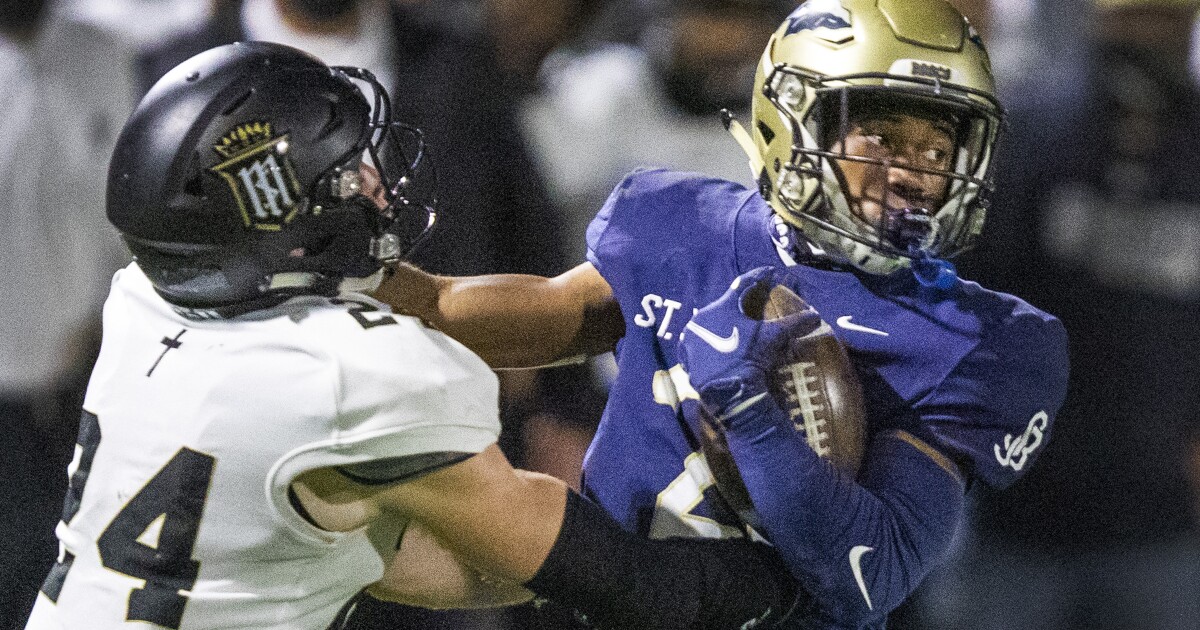 The Los Alamitos football team put together a good enough offensive performance to hang with Bellflower St. John Bosco for three quarters, but the Braves’ rushing attack was too much for the Griffins.

Host St. John Bosco had three running backs rush for more than 100 yards, amassing 588 yards on the ground and scoring eight touchdowns in a dominant 63-38 win to advance in the CIF Southern Section Division 1 playoffs.

Both offenses were in a groove from the opening kick. On their first drive, the Griffins executed a nine-play, 65-yard drive capped by a seven-yard shovel pass from Malachi Nelson to DeAndre Moore for a touchdown to give the Los Alamitos a 7-0 lead.

Bosco (10-1) scored the next three touchdowns of the first half powered by its explosive ground game.

Luke took his first touch of the game up the middle for a 68-yard touchdown and added another touchdown on his third carry, good for 43 yards to the end zone.

Pierce Clarkson gave Luke’s legs a rest and scored on a nine-yard designed quarterback run to give the Braves a 21-7 lead with 23 seconds to go in the first period.

Los Alamitos (9-2) got back on the board with a 39-yard field goal from Tyler McLachlan early in the second quarter, but Bosco struck again as Bates shot through a hole at the line of scrimmage and 56 yards later added six more points to the Braves’ lead, making it a 28-10 advantage at the 10:03 mark of the second quarter.

The Griffins didn’t waste time getting those points back as Nelson found his favorite target, Makai Lemon, up the right sideline for a 79-yard touchdown to cut their deficit to 28-17 with 9:49 left before the half.

After allowing Bosco to score on its first four possessions of the game, Los Alamitos forced the Braves into their first punt of the night, but couldn’t take advantage of a rare miscue from the Bosco offense.

Facing a fourth and 13 from the Braves’ 32, Los Alamitos drew up a trick play which had Nelson looking for a receiver in the left corner of the end zone. Nelson’s pass was intercepted by RJ Jones and the Braves didn’t waste the opportunity to add points.

Eight plays and 80 yards after the interception, Katin Houser took a quarterback keeper in for a touchdown to give the Braves a 35-17 lead.

Like much of the first half, Bosco and Los Alamitos traded touchdowns in the third quarter.

The Griffins forced the Braves into a punt on the opening possession of the second half, then blocked and recovered it deep in Bosco territory. Los Alamitos capitalized on that field position on a 25-yard pass from Nelson to Ethan O’Connor to make it a 35-24 Bosco lead early in the third.

The Braves answered quickly with a 77-yard touchdown pass from Clarkson to Colin Chase, which was followed by another Los Alamitos touchdown on a 17-yard pass from Nelson to Lemon, left St. John Bosco with a 42-31 lead.

The Braves added another rushing touchdown as Luke flew up the middle for an 80-yard score to give Bosco a 49-31 lead with 3:35 left in the third quarter.

Bates and Hayes each added a rushing touchdown in the fourth quarter to close out the victory.

Denial of responsibility! NewsUpdate is an automatic aggregator around the global media. All the content are available free on Internet. We have just arranged it in one platform for educational purpose only. In each content, the hyperlink to the primary source is specified. All trademarks belong to their rightful owners, all materials to their authors. If you are the owner of the content and do not want us to publish your materials on our website, please contact us by email – [email protected]. The content will be deleted within 24 hours.
Alamitosbest sports newsBoscochallengeJohnLosnews update sportsnewsupdate

For greater success as batsman, Virat Kohli should give up captaincy in all formats: Shahid Afridi