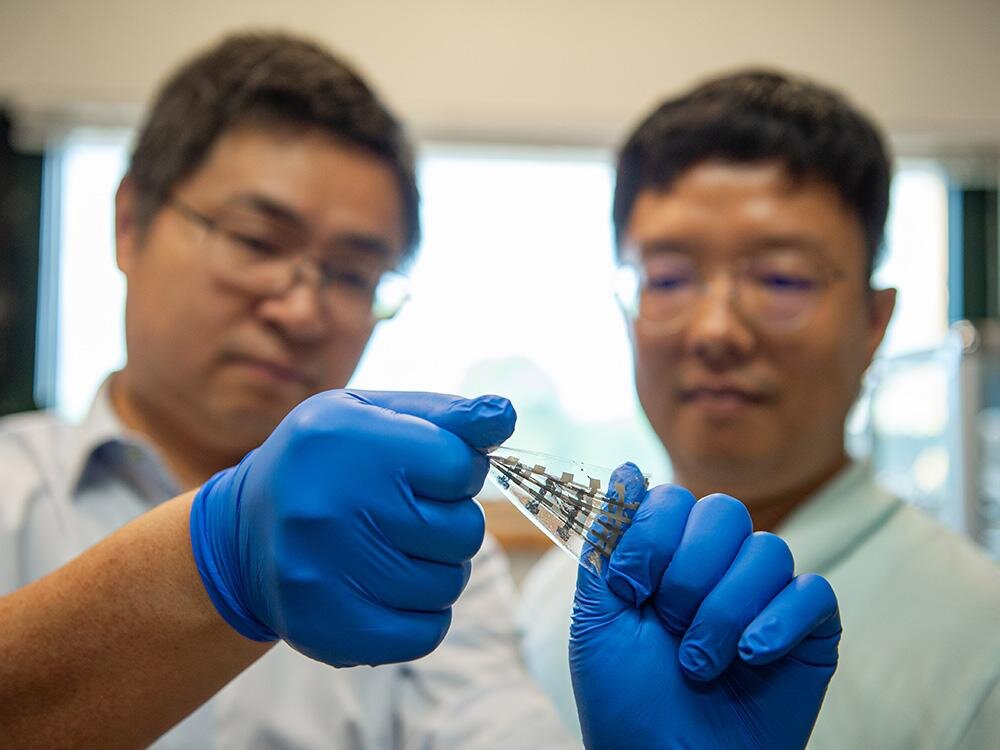 Robotics and wearable devices might soon get a little smarter with the addition of a stretchy, wearable synaptic transistor developed by Penn State engineers. The device works like neurons in the brain to send signals to some cells and inhibit others in order to enhance and weaken the devices’ memories.

Led by Cunjiang Yu, Dorothy Quiggle Career Development Associate Professor of Engineering Science and Mechanics and associate professor of biomedical engineering and of materials science and engineering, the team designed the synaptic transistor to be integrated in robots or wearables and use artificial intelligence to optimize functions. The details were published Sept. 29 in Nature Electronics.

“Mirroring the human brain, robots and wearable devices using the synaptic transistor can use its artificial neurons to ‘learn’ and adapt their behaviors,” Yu said. “For example, if we burn our hand on a stove, it hurts, and we know to avoid touching it next time. The same results will be possible for devices that use the synaptic transistor, as the artificial intelligence is able to ‘learn’ and adapt to its environment.”

“Unlike all other areas of the brain, neurons in the ventral tegmental area are capable of releasing both excitatory and inhibitory neurotransmitters at the same time,” Yu said. “By designing the synaptic transistor to operate with both synaptic behaviors simultaneously, fewer transistors are needed compared to conventional integrated electronics technology, which simplifies the system architecture and allows the device to conserve energy.”

To model soft, stretchy biological tissues, the researchers used stretchable bilayer semiconductor materials to fabricate the device, allowing it to stretch and twist while in use, according to Yu. Conventional transistors, on the other hand, are rigid and will break when deformed.

“The transistor is mechanically deformable and functionally reconfigurable, yet still retains its functions when stretched extensively,” Yu said. “It can attach to a robot or wearable device to serve as their outermost skin.”

Denial of responsibility! NewsUpdate is an automatic aggregator around the global media. All the content are available free on Internet. We have just arranged it in one platform for educational purpose only. In each content, the hyperlink to the primary source is specified. All trademarks belong to their rightful owners, all materials to their authors. If you are the owner of the content and do not want us to publish your materials on our website, please contact us by email – [email protected]. The content will be deleted within 24 hours.
best technology newsbioinspireddeviceenhanceMemoriesnews update technewsupdateStretchy

Interpol gears up to solve crimes in Metaverse: Report