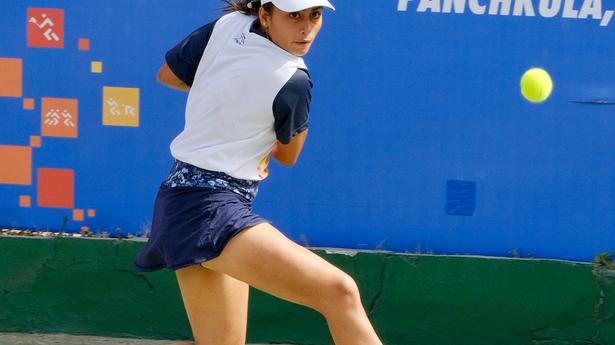 In the final, Suhitha will play Akanksha Nitture who subdued Maharashtra State mate Vaishnavi Adkar for the loss of six games.

In the boys’ section, Rushil Khosla set up a title clash with Dhruv Hirpara. The absence of Chirag Duhan and Aman Dahiya, seeded No. 1 and 2 in the boys event was a blow for host Haryana, in both singles and doubles.

In the girls’ doubles, Lakshmi Prabha and Janani Ramesh stopped an all-Maharashtra final, by beating Akanksha and Ruma Gaikaiwari 6-4, 2-6, [11-9].

After the energy sapping duel against Shruti, it was understandable that Suhitha could not stretch herself further in doubles with sister Reshma. The Karnataka pair retired after two games against Vaishnavi and Sudipta Senthilkumar.

Denial of responsibility! NewsUpdate is an automatic aggregator around the global media. All the content are available free on Internet. We have just arranged it in one platform for educational purpose only. In each content, the hyperlink to the primary source is specified. All trademarks belong to their rightful owners, all materials to their authors. If you are the owner of the content and do not want us to publish your materials on our website, please contact us by email – [email protected]. The content will be deleted within 24 hours.
Akanksha Nitturebest sports newsKhelo IndiaKhelo India Youth GamesKIYGnews update sportsnewsupdateseed

God of War Ragnarok is reportedly planned to launch in November