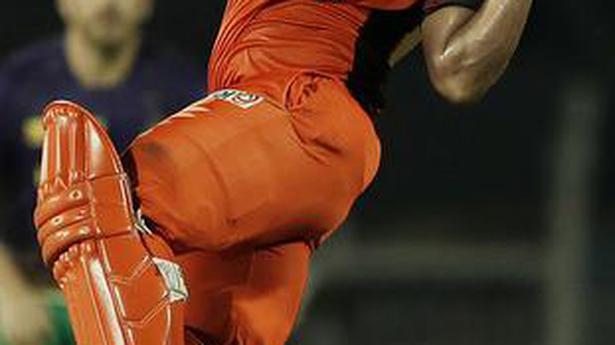 Jansen, Natarajan and Umran rattle the Knight Riders top-order even as Rana and Russell ensure a competitive total; the two batters explode during the chase of 175

Jansen, Natarajan and Umran rattle the Knight Riders top-order even as Rana and Russell ensure a competitive total; the two batters explode during the chase of 175

Nitish Rana and Andre Russell fired in the latter half of the innings to take Kolkata Knight Riders to a respectable total. But Rahul Tripathi and Aiden Markram masterminded the chase as Sunrisers Hyderabad registered a hat-trick of wins in IPL-2022 at the Brabourne Stadium on Friday.

Thanks to Tripathi and Markram’s 94-run association in just nine overs, Williamson’s men cruised past the target of 176 with seven wickets and 13 balls to spare.

Tripathi gave the Knight Riders every reason to repent its decision to withdraw from the bidding war during the player auction as he raced to a 21-ball 50 en route a match-winning 71 (37b, 4×4, 6×6). The highlight of his blistering knock was his assault on spinner Varun Chakaravarthy.

As soon as Varun came in to bowl the eighth over, Tripathi played his trademark lofted cover drive thrice in succession to collect 16 runs. That set the Knight Riders back after the Kolkata side had dismissed the Sunrisers openers Abhishek Sharma and Kane Williamson in the PowerPlay.

After tormenting his former team, Tripathi perished when he was caught on the boundary line in the 15th over. But Markram carried on batting in strokeful fashion, striking boundaries at will against a hapless bowling attack which struggled due to dew.

Much before the Tripathi-Markram star act, the Sunrisers pace quartet of Bhuvneshwar Kumar, Marco Jansen, T. Natarajan and Umran Malik had come up with an exceptional performance.

Bhuvneshwar and Jansen began on a perfect note, giving little room to Venkatesh Iyer and Aaron Finch. Incidentally, the Australian became the first to play for nine IPL teams.

Natarajan and Umran carried on the good work not only making run-scoring difficult, but striking regularly too. While Natarajan took two wickets in his first over, Umran, the Jammu & Kashmir Express, clocked consistently in the mid- and high-140s. Umran also crossed the 150kph mark in a fiery burst of pace bowling.

Umran also bowled in the perfect channel to Shreyas Iyer. The Knight Riders captain played and missed repeatedly in the speedster’s first two overs before a yorker crashed into his stumps as he tried to make room by moving towards the leg-side.

Denial of responsibility! NewsUpdate is an automatic aggregator around the global media. All the content are available free on Internet. We have just arranged it in one platform for educational purpose only. In each content, the hyperlink to the primary source is specified. All trademarks belong to their rightful owners, all materials to their authors. If you are the owner of the content and do not want us to publish your materials on our website, please contact us by email – [email protected]. The content will be deleted within 24 hours.
best sports newsbreathedealFireIPLnews update sportsnewsupdatepacers