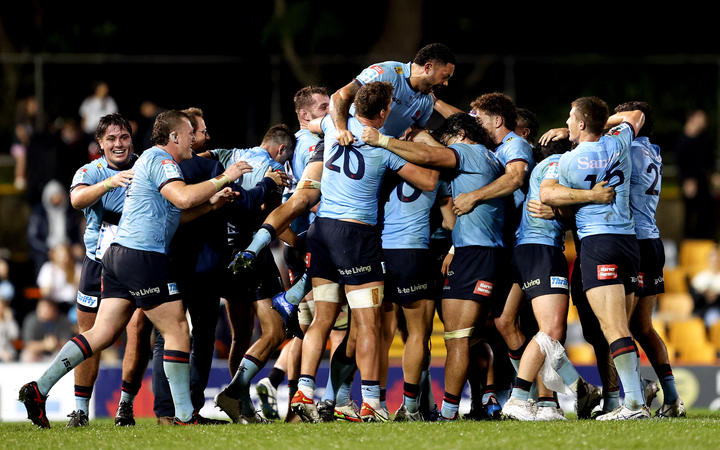 Waratahs players celebrate victory at full time during the match against the Crusaders at Leichhardt Oval in Sydney.
Photo: Photosport

Finally, we can talk about something red that isn’t cards when it comes to Super Rugby. Instead, it’s the faces of everyone who predicted that Super Rugby Pacific would be one way traffic when the competition went trans-Tasman. There were two big results for Australian teams over established New Zealand sides, plus one more for good measure over a new one.

Just to put it in perspective: this was the first time they’d won two games against NZ teams in one Super Rugby round in eight years. It was also the first time their sides had outscored ours in aggregate points in a decade.

Things kicked off on Friday night with a stinker of a game between the Reds and Chiefs in Brisbane. Both sides combined to aimlessly kick the ball to one another for most of the game, with the 27-25 scoreline making it look a lot more exciting than it really was. Had the Reds managed to sneak a penalty in the dying stages then it would have made it slightly less forgettable, because really the only reminder of this lacklustre showing we’re going to get is when Samipeni Finau gets inevitably suspended for his red card that he picked up.

It got slightly better in the late game between the Blues and Force from Perth, as in very late with a kickoff time of midnight. The Blues have come off their stretch of tough derby games and managed their squad, winning the last two games in rather workmanlike fashion, but no one is going to care how these victories were achieved if they are hosting a final at Eden Park in June. There was at least something to talk about in this one, with Roger Tuivasa-Sheck having his best game since making the switch from league – he is no doubt enjoying being in a far more consistent team than his old one.

But it was Saturday night when it got really interesting. The Crusaders, fielding a team missing a number of big names, nonetheless headed to Leichhardt Oval as heavy favourites against the Waratahs . What happened next wasn’t unprecedented, as the Tahs pulled off a shock win over an undergunned Crusaders in 2018 as well, however this time they did it with some inside help.

Charlie Gamble was probably unknown to most New Zealand rugby fans outside of Christchurch before this season, but the former St Bede’s College student is definitely on the minds of plenty now. The flanker has been everywhere on the field for the Tahs this season after being picked out of Sydney suburban footy, making him somehow both an archetypal New Zealander making a move story and proof that the grassroots system in New South Wales is working at the same time. The irony being that he was a highly rated junior player in the Crusaders system before being cut, so the 24-21 win would have been extra special.

The lowly Rebels and Moana Pasifika combined for another dirgefest in the first hour of their game, before it roared into life late. Lincoln McClutchie learned the hard way to carry the ball in his outside arm while running in to score, instead having it knocked out of his grasp by Carter Gordon in one of the best defensive plays of the season. Unfortunately, McClutchie went from zero to less than zero not long after, botching a penalty kick to touch and handing the Rebels the win.

While that was cruel, the Hurricanes can have no complaints after getting chewed up and spat out on Sunday afternoon by what is looking like a very powerful Brumbies side that is only going to get better. Rob Valetini, who is in a constant battle with Queensland’s Harry Wilson for the Wallaby number eight spot, scored an outrageous try for a man his size, while the rest of his team simply outplayed the Canes and snapped their three game win streak.

Will we see a repeat of the Australian resurgence next weekend? The Blues host the Rebels at Eden Park on Friday night, so probably not in that game. But the late game after that one is the Reds playing the woeful Highlanders in Brisbane, then on Saturday the Tahs will be fairly confident of getting a result against Moana Pasifika. The big game will be the Chiefs and Brumbies in Hamilton, but it’s unlikely the Crusaders will slip up again against the Force later on that night in Perth.

So there’s three very winnable games for the Aussies on the cards again. Which, while it might be painful for some of us to admit, is exactly what Super Rugby Pacific needed.

Denial of responsibility! NewsUpdate is an automatic aggregator around the global media. All the content are available free on Internet. We have just arranged it in one platform for educational purpose only. In each content, the hyperlink to the primary source is specified. All trademarks belong to their rightful owners, all materials to their authors. If you are the owner of the content and do not want us to publish your materials on our website, please contact us by email – [email protected]. The content will be deleted within 24 hours.
arentAudioAussiesbadbest sports newsCurrent AffairsNewsnews update sports

NASCAR at Dover 2022 to Resume Monday After Inclement Weather