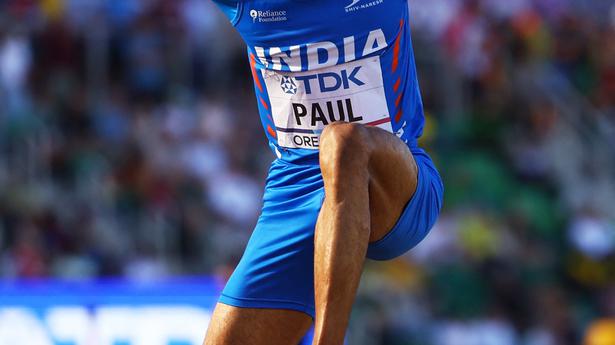 Teammates will be my main challengers: Paul

If this year’s performance list in the Commonwealth region is any indication, India should be winning all the men’s triple jump medals in Birmingham.

For Indians occupy the top four rungs and three of them — Commonwealth leader Abdulla Aboobacker (17.19m), No. 2 Praveen Chithravel (17.18) and No. 4 Eldhose Paul (16.99) — will in action in the Commonwealth Games.

But that is not how things work out at the majors and the recent Worlds offered some valuable lessons on that.

Still it was the 25-year-old Paul, yet to reach 17m, who made the biggest move in Oregon, becoming the first Indian triple jumper to enter the Worlds final and finishing a creditable ninth with 16.79m.

“Those were fanboy moments for me, got a lot of lessons from them,” said Paul in chat with The Hindu from Birmingham on Friday.

Paul believes Indians will be a force to reckon at the Commonwealth Games.

“Compared to other championships, medal chances are high here. And I think my teammates will be my main challengers. But it’s not about 17m or 18, it’s about consistency and experience overall,” he said.

“International events are very different from Nationals. The Worlds gave me valuable experience. If I can repeat that body condition here, I can win medal.”

Just five Commonwealth triple jumpers, including the three Indians, qualified for the Worlds.

A quick look at the Birmingham entry list indicates that England’s Ben Williams (17.27m personal best) could be the top man. But Williams could not even touch 16m at the Worlds, finishing 26th overall.

The signs do look good for India but Asian Games champion Arpinder Singh, the last triple jumper to win a Commonwealth Games medal (bronze, Glasgow 2014), feels it will need a big jump to hit gold in Birmingham.

Denial of responsibility! NewsUpdate is an automatic aggregator around the global media. All the content are available free on Internet. We have just arranged it in one platform for educational purpose only. In each content, the hyperlink to the primary source is specified. All trademarks belong to their rightful owners, all materials to their authors. If you are the owner of the content and do not want us to publish your materials on our website, please contact us by email – [email protected]. The content will be deleted within 24 hours.
Abdulla Aboobackerbest sports newsChallengersCommonwealth GamesEldhose Paulmainnews update sportsnewsupdate

The Nier: Automata church mystery has come to a close