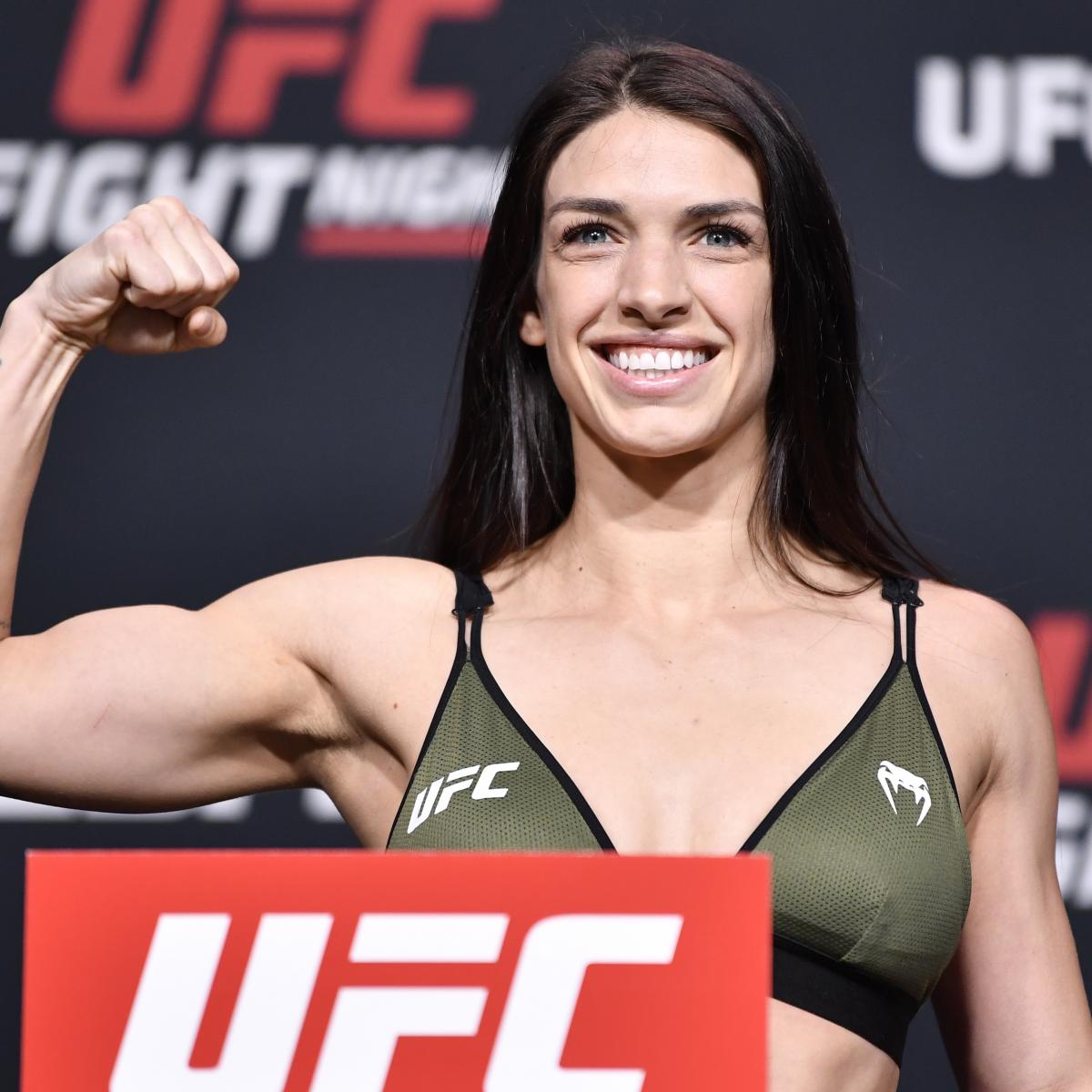 TGIFighting: How Should We Process Mackenzie Dern’s UFC Career to Date?

Mackenzie Dern’s massive potential was clear right out of the gate. On Saturday at UFC Fight Night 194, she will take another step in converting that potential to something decidedly more kinetic.

When Dern steps in against Marina Rodriguez (14-1-2) for her first-ever UFC main event, she will be looking to advance her pro MMA record to 12-1 and tee up either a title eliminator bout with someone like Zhang Weili (21-2) or a title bout with Rose Namajuanas (11-4).

Dern will also be poised to set a new record for most submission victories for a female competitor in UFC history. She’s tied with Gillian Robertson with four.

There’s no question Dern is good. That was clear before she ever donned a pair of MMA gloves, back when she was molly-whopping other BJJ grapplers en route to a slew of world titles. Cutting her teeth on jiu-jitsu mats under the watchful eye of father and BJJ legend Wellington “Megaton” Dias will have that benefit.

But her path to her first UFC main event hasn’t been linear, or terribly efficient, or free of controversy.

Her striking has gotten better, but that’s on a relative scale. Her standup was about as raw as a UFC fighter’s could be coming in. A 2018 split-decision win over Ashley Yoder (8-8) was razor close, and it prompted calls that Dern won more on celebrity factor than actual fighting.

Another flag came later that year when Dern was “invited” to leave the well-regarded MMA Lab gym in Arizona. Head coach John Crouch said she was “struggling” to make it to camp.

And this is to say nothing of The Accent Thing.

A few months after her MMA Lab departure, Dern announced she would put her MMA career on hold because she and professional surfer Wesley Santos were expecting their first child.

“The pregnancy was such a surprise and such a blessing, but when I announced it in February 2019, I lost 50,000 followers on Instagram instantly. Obviously, there were people following me who were just thinking, ‘Oh, she’s a hot girl that fights.’ And the assumption is that if you get pregnant, you’re not coming back—or if you do, you’re going to be soft inside.”

Take all of this together and it wasn’t hard to imagine Dern settling into the cushy life of a social media influencer. That’s certainly easier than cage fighting, no?

But that isn’t what happened.

A scant four months after giving birth to daughter Moa, Dern was back in the cage. It might have been too much too soon, as she suffered the first loss of her MMA career with a unanimous decision to Amanda Ribas (10-2).

Dern (left) in a loss to Amanda RibasJosh Hedges/Getty Images

But Dern stuck with it. She changed camps to work with vaunted coach Jason Parillo at RVCA Training Centre. Her striking made serious strides, and her submissions—particularly the dreaded armbar that always invites comparisons to Ronda Rousey—remained as sharp as ever.

Sandwiched around the pandemic, Dern ripped off a four-fight win streak, three of which nabbed post-fight bonuses. This culminated with her most recent fight, a first-round armbarring of the battle-hardened Nina Nunes (10-7). Still, the cumulative record of those four opponents was 47-28-1, which isn’t exactly world-beater territory.

Rodriguez presents a new challenge. She just finished piecing up Michelle Waterson (18-9) in May, outlanding the Karate Hottie by 125 significant strikes to 88, according to UFCStats.com.

Given Dern’s skill set, this is a striker-grappler matchup that Las Vegas bookmakers see as relatively close. Dern was a -165 favorite as of Thursday afternoon, per DraftKings.

If Dern can win and run her streak to five, she’ll likely find herself one win away from a shot at gold. And it’s something she’ll have earned, even if the road wasn’t linear.

So what do you think of her career to date as she sits on the eve of her first main event? Opinions on Dern range far and wide, and it seems everyone’s got one.

In an alternate universe, Jon Jones is traipsing across your social media feed, 25 pounds of solid mass heavier, melting pads with Mike Winkeljohn and winking into the camera with that trademark mustache-smile combination of his.

“Get ready, guys, March 1,” theoretical Jones says of his theoretical fight date. “Francis, watch out. I’m coming for you and I’m gonna be a double champ in the UFC.”

But this is not that universe. We learned that for good and all this week as a megafight between heavyweight champion Francis Ngannou (16-3) and interim champ Ciryl Gane (10-0) became a fait accompli. (That is, if we didn’t learn it last week when Jones was arrested again.)

The bout takes place in January as the presumed main event of UFC 270.

It’s time to stop treating this matchup like a consolation prize, and I mean that as much for myself as anyone else. This is a damn good scrap between the two best heavyweight MMA fighters on earth.

Ngannou, who opened as a slim -115 favorite on DraftKings, would have a puncher’s chance against the Dark Lord Sauron himself. He isn’t the champ for nothing, and his brutal knockout of Stipe Miocic (20-4) was just the latest case in point.

Ngannou isn’t just a headhunter, either. He showed solid stamina in outworking the normally high-output Miocic, including 28 significant strikes to the head compared with only three for Miocic.

Gane is more methodical and well-rounded, but he shed the boring tag when he picked apart Derrick Lewis (25-8 [1]) in August. After starting slowly with his familiar point-fighting attack, the Frenchman hobbled Lewis with leg kicks before swarming in for a merciless kill.

Gane appears to be a meticulous game-planner, so he will certainly have a strategy for contending with Ngannou’s power. If he can pull off the mild upset, he’ll have gone from an unknown to full-blown UFC champion in the span of two years.

I’m not a big boxing guy, but I do have a soft spot for the headhunters. That’s why I’m riding with Deontay Wilder this weekend to pull the upset over Tyson Fury.

In walking Wilder down repeatedly, Fury appeared to solve the Wilder puzzle. But both men have had plenty of time to adapt, and Wilder still has that morning star on the end of his right hand, which might be the most dangerous weapon in all of combat sports.

Will he get it off? Fury has walked through that fire before, but it’s an open question as to whether he can do it again, or whether Wilder will let him stay on the outside for extended periods.

But in the meantime, give me Wilder for the KO.

Stone-Cold Lead-Pipe Lock of the Week

That was a swing and a miss by me with Johnny Eduardo (28-13). Big-time whiff. I mean, the guy got submitted with a scarf-hold armlock.

In fairness, Eduardo probably won the first round and much of the second before finally succumbing to a submission. But, horseshoes and hand grenades and all that.

Let’s get back on the horse this week and bring it full circle with a pick for Dern to handle Rodriguez in Saturday’s main event.

Want to spice it up? DraftKings has Dern at +100 to grab her record-setting fifth UFC win by way of tapout.

Lock this one in and let the winnings flow like wine in the streets.

Denial of responsibility! NewsUpdate is an automatic aggregator around the global media. All the content are available free on Internet. We have just arranged it in one platform for educational purpose only. In each content, the hyperlink to the primary source is specified. All trademarks belong to their rightful owners, all materials to their authors. If you are the owner of the content and do not want us to publish your materials on our website, please contact us by email – [email protected]. The content will be deleted within 24 hours.
best sports newscareerdateDernsMackenzienews update sportsnewsupdateprocess

What Can Convince People to Just Get Vaccinated Already?

All-new AirPods 3 could arrive this week, and they sound…