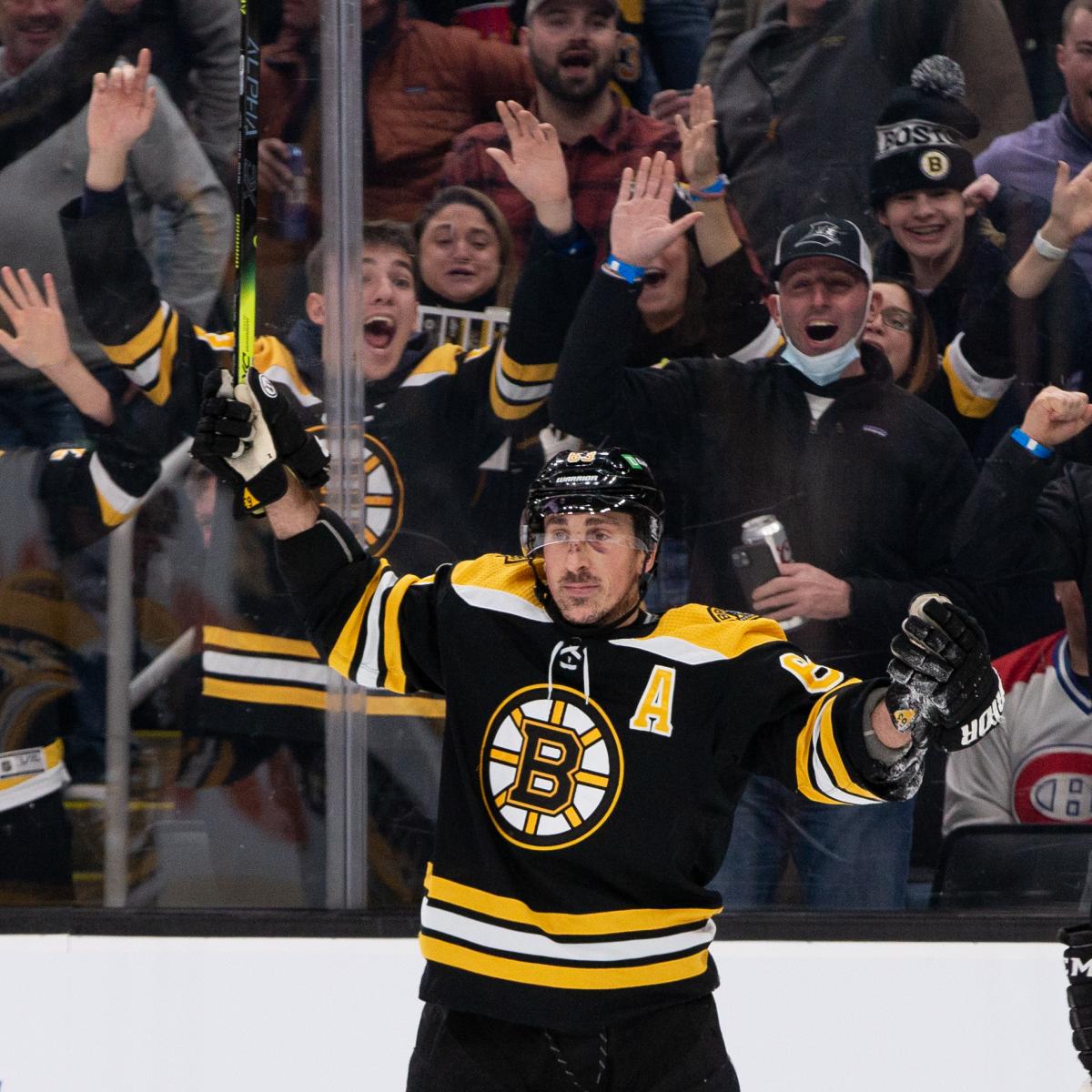 The NHL All-Star Game is generally one of the most entertaining times of year for hockey fans. It’s an opportunity to see our favorite players in a more relaxed setting, and sometimes we even get a glimpse of their personalities too.

That’s rare in this league, where skaters are typically more reserved and timid about drawing the spotlight onto themselves. That’s what this contest is all about, though; highlight-reel plays and entertainment from the best the game has to offer. And there’s something about the All-Star Game that alleviates some of that reluctance to draw attention, which makes it a fun weekend on the whole.

This year, the contest is being held in Las Vegas, which should make the proceedings even more spectacular than usual. And the sweaters even look pretty slick to boot.

Rosters like this can only have so many players, however, which means that a handful of deserving candidates end up on the outside looking in. That means they get the weekend off to do whatever they’d like, so they probably aren’t too upset about the developments, but some fans might be.

Here are our picks for the biggest All-Star Game snubs for the 2021-22 game, at least before fans have their say via the Last Men In voting contest.

As Pierre LeBrun noted on Twitter, the league tends to check up with teams “before picking All-Stars in an effort to not pick a guy who truly doesn’t want to go.” It’s speculation on our part, but that almost certainly has to be the case with Artemi Panarin of the New York Rangers.

With all due respect to Chris Kreider, who made the All-Star team as a representative of the Blueshirts—along with Adam Fox—Panarin is, frankly, the superior forward here. They both bring different elements to the table, and if there was any kind of physicality during All-Star Games, then the argument could be made that Kreider brings that element.

Yet you’re more likely to see Phil Kessel in a Toronto Maple Leafs uniform again than see a real body check thrown with any kind of intent at the All-Star Game in Vegas. As such, Panarin seems like a no-brainer of a pick to represent the Metropolitan Division.

Not only is he the best offensive forward on his team, but he is also among the most electric talents in the entire league. Panarin is one of the most creative players in the game, and this contest will be a bit worse off without him taking part.

Over the last three seasons, only eight players sport a better point-per-game percentage than the 30-year-old wing. He is tied for the Rangers’ lead in points and is tied for 16th overall in the NHL. If the All-Star Game is really about skill, Panarin deserves a spot and is a pretty big snub here.

The omission of Brad Marchand from the Atlantic Division’s roster is another head-scratcher. Like Panarin, he also isn’t on the Last Men In ballot, so perhaps he wasn’t interested in attending the contest in Vegas. No one is going to argue with Charlie McAvoy landing on the last-chance poll, either.

Still, there’s no denying that all things even, the Boston Bruins wing deserves to be skating among the NHL’s elite come Feb. 5. Patrice Bergeron is a wonderful ambassador for the game, but the crew at ESPN even recognized the glaring absence of Marchand, spending ample time during the roster unveiling discussing it.

The forward leads the Bruins in goals (19), assists (20) and points (39), with his point total ranking tied for ninth in the league. Meanwhile, only seven players in the league have found the back of the net more frequently.

Marchand also has scored eight times in his last four outings, making headlines along the way for a funny mic’d-up moment. He’s not necessarily the most beloved player around the league, but in Boston, he’s a made man.

He’s also one of the most entertaining players both on and off the ice, and we’re likely missing out on some hilarious moments in Vegas without Marchand taking part in the All-Star Game.

There’s really no excuse for Trevor Zegras not to be on the Pacific Division’s roster. Again, unless he made it clear that he didn’t want to be involved for some reason, he’s the kind of player that the weekend is supposed to be all about.

Never mind that he represents the next wave of entertaining and creative forwards that seem to have taken the league by storm over the last several seasons. Sure, he made a ton of headlines for his unconventional pass that led to this goal, but that was just one colorful pop in a season full of offensive fireworks from the forward.

Zegras is oddly influential for a 20-year-old rookie, seemingly making it all right to try radical and fun things during hockey games overnight. Coaches are always going to want to see skaters make the safest plays, but when the creativity turns into goals, there’s nothing bad that can be said about it.

Unless you’re a fossil like John Tortorella, but B/R’s own Abbey Mastracco already took the old-school bench boss to task for his comments in mid-December, so we won’t delve into that here.

Instead, it’s just kind of flabbergasting that Zegras won’t be in Vegas to take part in a 3-on-3 tourney that seems tailor-made for talents like him. Troy Terry is the Anaheim Ducks’ representative on the Last Men In ballot, so we’ll have to wait at least another year for Zegras to make his All-Star Game debut.

Every team in the NHL has dealt with players going in and out of the lineup throughout the 2021-22 campaign. That’s just been the reality of the last three calendar years. Yet when the Colorado Avalanche needed someone to step up this season, with their top forwards on the shelf for various chunks of time, Nazem Kadri elevated his game to new levels.

Not only does he lead a team with legit Stanley Cup hopes in scoring with 49 points, but he’s also fourth in the entire NHL in that regard. The All-Star Game doesn’t always directly reflect the top scorers’ list, but Kadri has almost certainly earned a spot on this roster.

Unlike with our first three selections, fans have the ability to right this wrong via the Last Men In ballot, and Kadri might most deserve to emerge from that 32-player process.

He’s arguably been their most consistent player and deserves to be rewarded with a trip to Vegas to skate alongside the league’s best. It’s not a development anyone would have predicted this summer either.

Who doesn’t love a good underdog story? Get this man into the All-Star Game with your votes.

Like Zegrad, Lucas Raymond hasn’t just been good for a rookie. He’s been flat-out awesome for the Detroit Red Wings. So much so that some pundits see him as an accelerant for the rebuilding franchise’s climb back toward relevancy.

What’s most impressive about the teenager is that even when he’s not scoring—which is something he’s done plenty of this year—he’s finding other ways to impact the game. Raymond is also an electric performer during overtime periods, which means he’d probably be pretty fun to watch during 3-on-3 action.

It’s been a long time since anyone has been able to reasonably suggest that Sidney Crosby isn’t the best player on the Pittsburgh Penguins. There was a season or two there when Evgeni Malkin might have been more dominant, but The Kid has largely been Pittsburgh’s top player since 2005.

That might not be the case in 2021-22. Not with Malkin just making his season debut earlier this week and Jake Guentzel driving play whenever he’s on the ice. He leads the team in both goals and points and is a huge reason this Penguins team isn’t thinking rebuild just yet.

Kadri ought to be the Central Division’s last player added. It’ll come down to a popularity contest now, and it’s difficult to imagine the forward beating out Seth Jones (Chicago) or Mark Scheifele (Winnipeg).

Roman Josi gets the, uh, honorary honorary mention here. He’s been a play-driving, scoring machine for a Nashville Predators team that appears poised to make the playoffs despite low offseason expectations.

At one point, it seemed like Troy Terry was going to have a point in every contest the Ducks played. He had to settle for a 16-game streak, which would be tops this year if not for that Connor McDavid fella’.

That’s not bad company to be in, and if Zegras isn’t going to be in Vegas, then his surprisingly effective teammate in Terry should be instead.

Denial of responsibility! NewsUpdate is an automatic aggregator around the global media. All the content are available free on Internet. We have just arranged it in one platform for educational purpose only. In each content, the hyperlink to the primary source is specified. All trademarks belong to their rightful owners, all materials to their authors. If you are the owner of the content and do not want us to publish your materials on our website, please contact us by email – [email protected]. The content will be deleted within 24 hours.
AllStarbest sports newsbiggestGamenews update sportsnewsupdateNHLreveal

Call of Duty Could Move Away From Annual Releases, According…