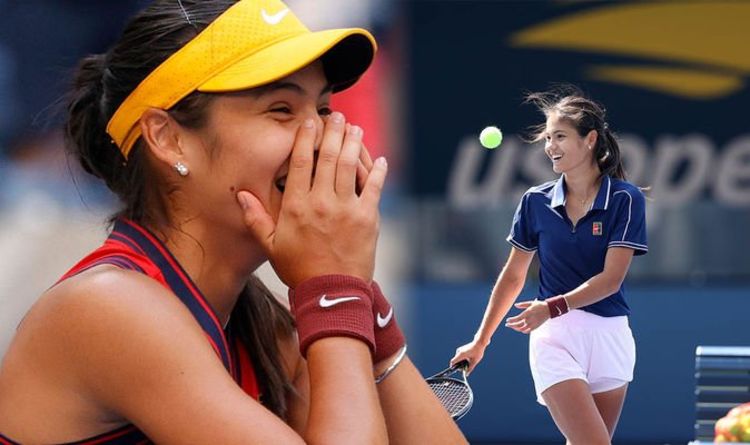 Emma Raducanu has had a sensational year. The teen tennis player first burst onto the scene at Wimbledon this year, securing a place in the fourth round. It seems the only way is up for this 18-year-old tennis prodigy, as she faces her toughest match yet at the US Open finals tonight.

Until this summer, the teenage star from Bromley, was virtually unknown in the tennis world.

She was ranked outside the world’s top 300 players but the US Open finals 2021 tonight will see Ms Raducanu make history.

She will become the first British woman to contest a Grand Slam singles final since 1977.

The teen secured a place in the finals, after she cruised to victory in the semis against in Maria Sakkari.

READ MORE: Emma Raducanu ‘will dominate the next decade’ of tennis

But it’s her parents who have played a pivotal role in Ms Raducanu’s rise.

Ian and Renee Raducanu, who both work in finance, aren’t sports stars themselves. But this hasn’t stopped them from driving their daughter to success on the tennis court.

As a young chid, Emma tried her hand at dozens of sports – first starting with ballet before moving on to horse riding, swimming and go-karting.

But it was tennis she really excelled at – a skill she first tried when her parents started playing at their local park and dragged her along.

From there, she went from success to success – and it’s largely down to her hard work and support from her mum and dad.

Former GB player and commentator Mark Petchey said the teen’s father – who would hit tennis balls with Emma in the street during the Covid lockdowns – has played a key role in her success.

Mr Petchey told the Mail: “[Ian’s] outlook on tennis is wide-ranging and he is happy to think outside the box.

“As a coach, he challenges you – his view is the coach does not necessarily know everything.”

At one point, her dad was so pivotal for her tennis career, there were rumours he wanted her to have a different coach for ever single shot.

Coach Matt James, who was part of Raducanu’s team at Wimbledon, said: “I was lucky enough to do two years with Emma and we had different people coming in, almost consultants and people that would give their advice, and that’s just how they wanted it. Her dad and Emma just wanted the knowledge.

“She’s a bright girl and she can remember it and process it, and almost seeing it as the more the better rather than hearing the same thing over and over.

“They’ve stuck to their guns, which you’ve got to respect because it’s obviously worked out pretty well for them.”

In an interview she said: “My parents definitely have high expectations. In anything, not even just tennis. I have to be the best, do the best I can.

“They both came from very academic families and in pretty tough countries growing up – my dad in Romania and mum in China – so they probably have a lot of that remaining.

“They want me to have options, they think my education is very important for my future.”

Despite her devotion to the sport, the tennis star managed to ace her A-Levels too.

Again, this came down in part to her tag-team parents – while Ian pushed her to become a top athelete, her mother made sure she never fell behind with her academic work.

Both her parents, who cannot be with her in New York due to Covid restrictions, had to read out her recent results over the phone.

The clever teen secured an impressive A* grade in maths and an A in economics.

Harry Bushnell coached Emma from the age of six to 11 at the Parklangley Club in Beckenham.

Denial of responsibility! NewsUpdate is an automatic aggregator around the global media. All the content are available free on Internet. We have just arranged it in one platform for educational purpose only. In each content, the hyperlink to the primary source is specified. All trademarks belong to their rightful owners, all materials to their authors. If you are the owner of the content and do not want us to publish your materials on our website, please contact us by email – [email protected]. The content will be deleted within 24 hours.
Loading...
best sports newsbizarreCoachingEmmaFatherhelpednews update sportsnewsupdate

What is Triller? How to live stream Evander Holyfield vs. Vitor Belfort fight on the social media app