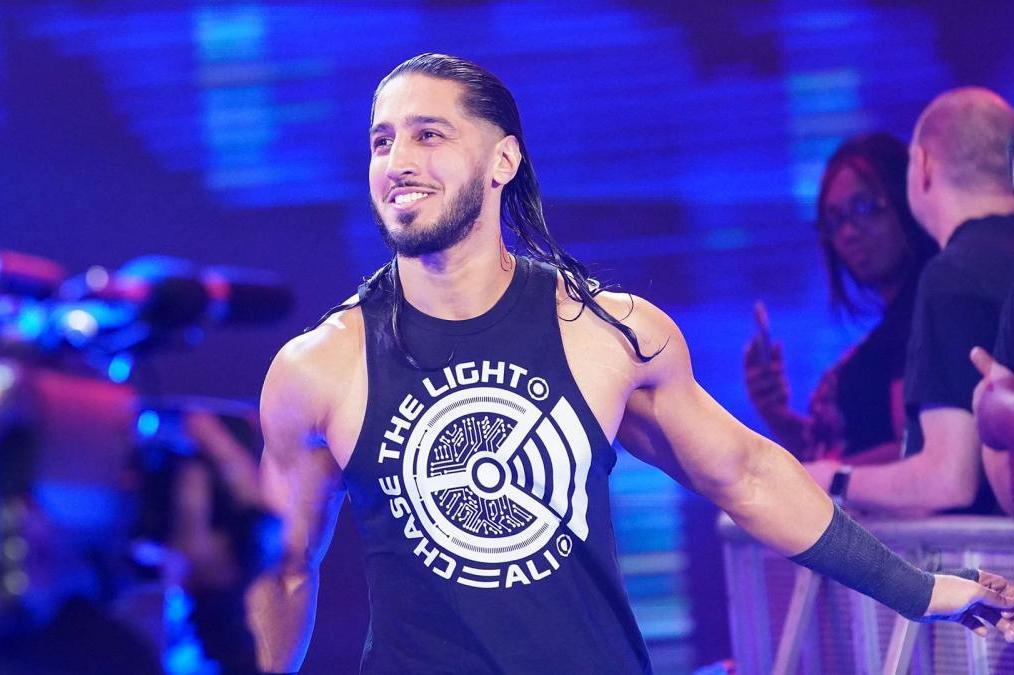 Mustafa Ali might be the next example of WWE’s erratic booking derailing a Superstar before they can really get going (again).

The handful of weeks after a WrestleMania can feel like a reset of sorts for the next upcoming WWE “season” and what it might offer. So, it was pretty encouraging that on the April 25 edition of Raw, Ali made his big return and took down The Miz.

That seemed like it might signal something special for the 36-year-old on a weekly program with a notable lack of main-event guys, let alone big contenders for mid-tier titles like the U.S. title (which didn’t even get defended on a two-night Mania, somehow).

It was made more exciting in part because this was happening for Ali, who had very publicly asked for his release months ago and even tweeted about how he wouldn’t be back until his deal expired.

Yet back he was, and he swiped a win over The Miz, a future Hall of Famer who had previously been in big matches like an encounter with Cody Rhodes and the ‘Mania match involving Logan Paul.

But Ali lost the very next week in a handicap match to United States champion Theory and The Miz in just a handful of minutes. To make it even worse, Dave Meltzer of Wrestling Observer Radio (h/t Michael Perry of Ringside News) suggested, based on his familiarity with the company, that the loss was a bad sign of things to come and that Vince McMahon gives Superstars in a push just a few weeks to win over crowds.

It would be stunning to see WWE bring Ali back, give him a win, then pull the plug just a week later. Worst of all, this flirtation with the U.S. title and competitors like Miz were capped off both times by getting attacked by Ciampa, relegating him to a feud perhaps around the title but never actually seeing him get a chance.

And it’s frankly wild that WWE would come to a conclusion on this matter so quickly. For all anyone knows, the crowd in the arena to see Ali’s big return win two weeks ago was just a mild crowd. It happens. Some nights and towns are just off for reactions no matter what happens. Some spots, like the Raw after ‘Mania, are hotbeds for dynamite reactions to anything.

Which makes one wonder if WWE really ever had anything big for Ali planned to begin with. Here is WWE, trying to book a three-hour show, and doesn’t fit Ali’s big return in on the Raw after Mania? Then quickly shuts down a potential push after a single week?

Regardless, the problem is inconsistency. Veer Mahaan was given seemingly endless debut promo packages for months. After an underwhelming debut, he’s squashed no-name competition for a month straight. WWE is letting him just bully people without any real competition, and it is tired already. Yet despite the lack of reactions, it just keeps going and going.

Which is to say, investing in Superstars for the long term is the only way to truly build stars. WWE knows this, too. Just look at how it handled Drew McIntyre when it realized the company needed a top star to finally headline shows. AEW knows it too, as seen with the very long, superb build for Adam “Hangman” Page as the company’s top star.

This only makes the sting of Ali’s treatment worse, of course. To return, beat a very notable opponent, only to get squashed one week later, signals to fans that he’s destined to be a Superstar spinning his wheels in purgatory.

It should be noted that WWE needs to walk a fine line when it comes to listening to fans. They never get the magical Daniel Bryan run all those years ago if they don’t listen. They don’t get heel Becky Lynch, The Man. But those things didn’t happen in a single week, and one show’s reaction shouldn’t make or break a push in either direction.

No company is perfect in this regard, but WWE is flying too close to the moments sun, as usual. Just because one moment didn’t necessarily pop, it doesn’t mean the push should be torn up. The handling of Ali and others who could become stars for the company is what leads to a three-hour show requiring filler material and why fans just check social media highlights instead of tuning in and getting invested in certain Superstars.

WWE is failing Ali, and he’s joining a long list of Superstars in that position.

Denial of responsibility! NewsUpdate is an automatic aggregator around the global media. All the content are available free on Internet. We have just arranged it in one platform for educational purpose only. In each content, the hyperlink to the primary source is specified. All trademarks belong to their rightful owners, all materials to their authors. If you are the owner of the content and do not want us to publish your materials on our website, please contact us by email – [email protected]. The content will be deleted within 24 hours.
Alibest sports newscasefailinglongnews update sportsnewsupdateproper