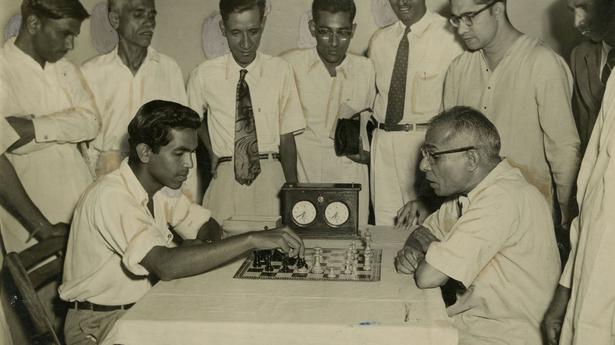 In the run-up to the 44th Chess Olympiad, the kings and queens from this Mecca of chess speak on how the game has developed in the city since the 1960s

In the run-up to the 44th Chess Olympiad, the kings and queens from this Mecca of chess speak on how the game has developed in the city since the 1960s

Chennai has a long and colourful history with chess, from temples of Shiva a few hundred kilometres away celebrating its earliest iteration, known as sathurangam (at Thirupoovanur in Tiruvarur district), to it hosting the latest International Chess Olympiad at Mammallapuram, the first of its kind to be held in India.

So, it is not surprising that, according to FIDE (the International Chess Federation, or Fédération Internationale des Échecs) as of 2022, of the 76 Grandmasters (GM) in India, 17 are from Chennai alone and of the five Indian players in the top 55 in the world, two are from Chennai. The question remains though, on whose shoulders are these contemporary Chennai chess players standing?

Many consider modern international chess to have been popularised in the country in the 1960s and consider Manuel Aaron, 86, India’s first International Master (IM), to have spearheaded the movement. He humbly rejects this notion: “When I came here (Aaron had moved from colonial Burma) international chess was already there in Madras. Since 1938, The Hindu has been publishing chess news, I have [newspaper] cuttings with me. I didn’t popularise it, I was a part of the system,” he laughs.

“There were no chess clubs at all in the 1960s,” says Aaron, looking back to how the game was played in Madras. “There were hardly any official places where people got together for chess. Some people’s homes were turned into impromptu chess clubs, like the Ramani Press in Mylapore [South Mada Street]. It was the result of a family of chess players. ‘I’m going to Ramani Press,’ that’s what everyone would say. There was also a place in Egmore: Mayor Radhakrishnan [Hockey] Stadium. People used to play chess on the lawns, bringing their own sets. Another place was Victoria Public Hall, next to the Moore Market.” Word-of-mouth and newspapers were how chess enthusiasts learnt the game back then, recalls Aaron. “I was never taught… I just watched my parents play and got the hang of it. It must have been the same for many other people too.”

While The Mail and The Hindu published chess pieces every week, The Hindu also hosted one of its oldest modern chess tournaments. “It all started with The Hindu” Aaron says. “In 1940, before anybody else was hosting open tournaments, The Kasturi Cup came into being. This was hosted by Kasturi Srinivasan, he was a chess lover.”

Growing up in this environment, Aaron found that an organised approach to building a chess community would prove invaluable to those interested. Which led to him accepting the then-Soviet Consul’s offer of starting a chess club at the Soviet Cultural Centre. Tal Chess Club, named after the eighth World Chess Champion Mikhail Tal, was founded by Aaron and other Madras chess enthusiasts in what is today the Russian Centre of Science and Culture. The club itself was supported by the Soviets, by providing chess clocks, wooden boards and books made in Russia, and charged a nominal ₹6 annual fee for maintenance. This club was a host to many who hold ‘India’s first’ titles in chess.

Venkatachalam Kameswaran, India’s first International Arbiter (IA), was one of the club’s initial members. “At that time there were clubs like YMCA Royapettah, with chess playing centres. Manuel Aaron, others and myself started a club in the Soviet Cultural Centre. This was where [Vishwanathan] Anand used to come very frequently with his mother, Sushila Viswanathan,” he says.

How Aaron set the board for Indian chess

Despite him stating he hadn’t popularised the game, Aaron’s contributions to chess in Tamil Nadu and India are notable. He was a former two-time honorary secretary of the All India Chess Federation, the general secretary of the Tamil Nadu State Chess Association, India’s only IM for 17 years, nine time national chess champion, and the consecutive champion from 1969 to 1975, India’s first chess Arjuna awardee, in the Karpov-Kasparov, 1986 Match, he was an appeals committee member. He was a member of the FIDE Central Committee, a facilitator to aspiring chess youth including Vishwanathan Anand and the president of Tal Chess Club.

He is also a prolific author of chess literature, having edited Chess Mate, a monthly chess magazine founded by him in 1983 and contributed to the AICF Chronicle. He has authored six books on chess, including Tamil Chess and Indian Chess History: 570 AD – 2010 AD (co-authored with chess historian Vijay D Pandit)

Kameswaran believes the coaching camps, which they held three to four times a week, helped Anand and other youth in the club improve.

Meenakshi Subbaraman and her sister Vijaylakshmi were also among those that attended the club. Vijayalakshmi Subbaraman was India’s first Women’s Grandmaster (WGM) and female IM. Meenakshi holds the title of WGM as well and was one of the top ranked players along with her sister. “There were hardly 10 of us when we started out. There were girls who couldn’t break the district barrier and there were more who couldn’t break the State barrier. There were only 10 who could go to the National level. Maharashtra women have always been strong in the women’s chess scene and to break that barrier was very difficult. The first to do that was Saritha M Reddy and then my sister.” She attributes most of hers, as well as her sister’s, accomplishments to her father. “It was all my father’s work” she adds. “We were from a humble background, so we didn’t have any backup. It’s not an easy thing to dream so big. Even now it’s difficult, think about how it would have been 20-30 years back. He wanted to break the mold.”

In conversation with Bobby Fischer

Manuel Aaron has been the only Indian player to have officially played with Bobby Fischer, who many credit as being a major influence in popularising the game. After his game Aaron recalls that Fischer used to “visit his hotel room, talk with me and chat about India”. Despite this brief interaction, Aaron considers him a friend “In 1990, he he called me out of the blue and said ‘Can you arrange a match for me with [Vishwanathan] Anand?’. I said I’d try but he had some conditions, he said he’d be defending his world title against Anand and if it wasn’t accepted the match was off [Fischer refused to defend his title in 1975 against Karpov]. But this was after so many years after Kasparov and many other people were part of the international game scene. He’s not been world chess champion for some time. This plan didn’t work out.”

Another parent-child relationship brought closer by the Tal Chess Club was Ebenzer Joseph and his father, Cecil Joseph. “When the club had no interest in paying the high rent Ebenzer stepped in.” Aaron adds. “He started running the Emmanuel Chess Centre at the Russian Cultural Centre. His father Cecil Joseph was the last president of the club”

“I was the youngest participant to join the Tal Chess Club in the year it was initiated in, 1972. When I was five and a half” says Ebenzer, India’s first FIDE trainer.  “It was a glorious time, in the ‘70s and ‘80s. This was until the Soviet Union split; and Tal Chess Club had to close down. Ebenezer was willing to pay the rent, which continues to this day. And that’s how the club functions to this day in the same premises. At the time [1995], I pleaded with them. I said I’d pay on par with the American International School [the new tenants] for just two hours a week. I still do that to this day.” Vishwanathan Anand being felicitated in his teenage years
| Photo Credit: The Hindu Archives

Denial of responsibility! NewsUpdate is an automatic aggregator around the global media. All the content are available free on Internet. We have just arranged it in one platform for educational purpose only. In each content, the hyperlink to the primary source is specified. All trademarks belong to their rightful owners, all materials to their authors. If you are the owner of the content and do not want us to publish your materials on our website, please contact us by email – [email protected]. The content will be deleted within 24 hours.
best sports newsChennai chess GrandmastersChennaischesschess grand mastersChess IMChess Olympiadchess tournament Chennai

Get ready to max out multipliers in Aztec masterpiece MexoMax! MultiMax™