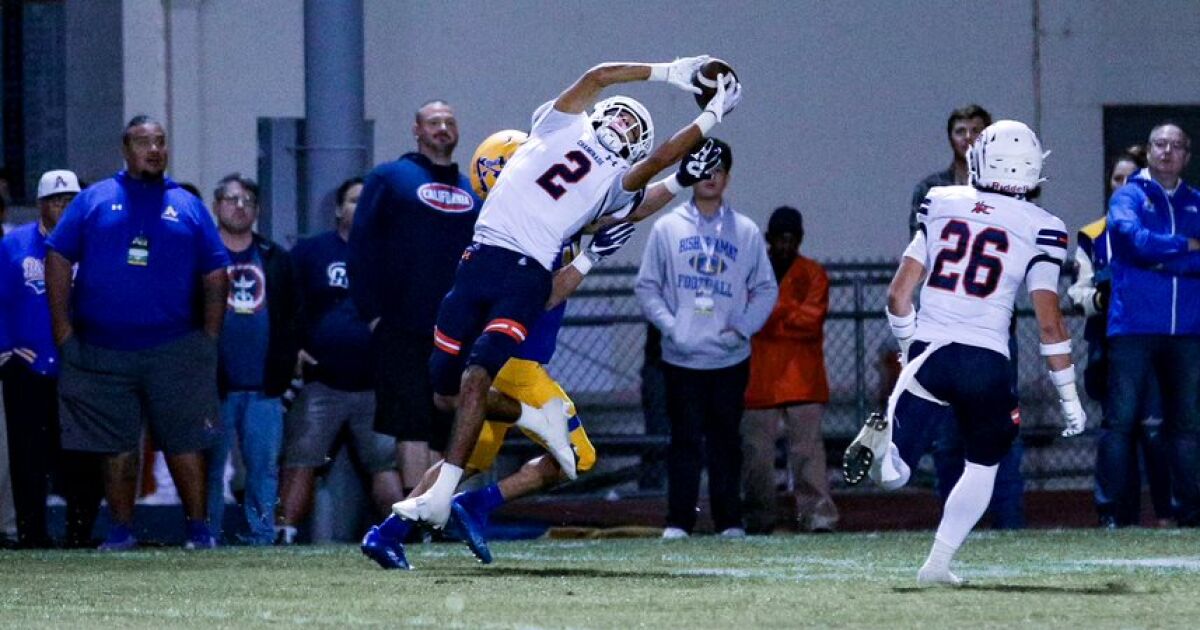 It’s that time in the Southern Section and City Section football playoffs where there’s either going to be tears of joy or tears of sorrow.

It’s semifinals time, one win away from playing for a championship.

Let’s review some of the big matchups.

Los Alamitos vs. Mater Dei at Santa Ana Stadium: Elijah Brown of Mater Dei still hasn’t lost as the starting quarterback — he’s 28-0. Who’s going to pick against him? The big attraction is seeing how Mater Dei’s superior defense will do trying to tackle running back Damian Henderson and cover the explosive Makai Leonard. The pick: Mater Dei.

Sierra Canyon at Bishop Amat: Coach Steve Hagerty of Bishop Amat wanted this rematch even though his team won in overtime against the Trailblazers and knows Sierra Canyon will be motivated. He’s got a team on the upswing behind quarterback Richie Munoz and running back Aiden Ramos. But Sierra Canyon discovered over the course of this season it has a special running back in sophomore Dane Dunn. Its inexperienced quarterbacks have improved. And it’s playing like the preseason top 10 ranking it had. The pick: Sierra Canyon.

Chaminade vs. Inglewood at El Camino College: Unbeaten Inglewood is very much capable of winning this game. The Sentinels have proved they belong. Their speed will cause Chaminade lots of problems. But can they handle the power pitch that the Eagles utilize when needed? Kicker Ryon Sayeri of Chaminade is 11 of 13 on field-goal attempts, so if it comes down to a field goal, beware of the Eagles. The pick: Inglewood.

Birmingham at Banning: Both teams underachieved in nonleague games against Southern Section opponents but have reached peak form. Birmingham has won 32 consecutive games against City Section opponents. It all comes down to how many times the Patriots can get the ball to versatile Peyton Waters and rely on their defense. Banning’s offense has come alive behind a young but improving offensive line and quarterback Robert Guerrero. The pick: Birmingham.

Eagle Rock at Garfield: Bulldog fans are still celebrating that win over rival Roosevelt at the Coliseum, but the real news is Garfield could be playing for a City Section Open Division championship next week. The Bulldogs’ rushing attack has come alive. Eagle Rock showed last week in an upset of unbeaten San Pedro that it belongs in an evenly matched Open Division tournament. The Eagles play hard and enjoy being the underdog. The pick: Garfield.

Cleveland at Granada Hills: There’s really no stopping running back Dijon Stanley of Granada Hills. He’s too fast and too explosive. So the Cavaliers need to be able to score some points behind dynamic receiver/defensive back Kory Hall. The pick: Granada Hills.

Narbonne at Palisades: The Gauchos have slowly risen from the bottom after losing all their top players following a coaching change and probation for rule violations. That’s a victory itself. But now Narbonne has serious aspirations of coming all the way back. The defense has played well and its speed figures to cause problems for Palisades, a young team that has shown steady progress. The pick: Narbonne.

Denial of responsibility! NewsUpdate is an automatic aggregator around the global media. All the content are available free on Internet. We have just arranged it in one platform for educational purpose only. In each content, the hyperlink to the primary source is specified. All trademarks belong to their rightful owners, all materials to their authors. If you are the owner of the content and do not want us to publish your materials on our website, please contact us by email – [email protected]. The content will be deleted within 24 hours.
best sports newsbreakingCityfinalFootballnews update sportsnewsupdateSection