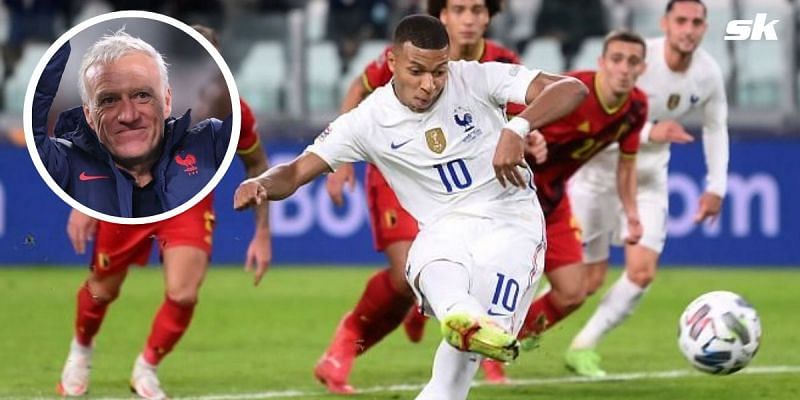 Kylian Mbappe put up a decent display as France secured a hard-fought victory against Belgium in the semi-final of the UEFA Nations League yesterday. Les Bleus manager Didier Deschamps has claimed the team is better with the PSG forward than without him.

The tactician was quoted as saying:

“Kylian Mbappe didn’t have any doubts. He was determined after lacking efficiency at the Euros.

“Like I always said, the French team is better with than without Kylian Mbappe. We were knocked out by Switzerland (at Euro 2020) but the France national team is still here. We’re still among the best teams.”

Didier Deschamps also commented on his side going two goals down in the first half of the clash. He added that a half-time talk inspired the turnaround that produced the 3-2 victory.

“In the dressing room, they obviously felt beaten up to come in from 2-0 down. It was severe even though we gave them the opportunity to score two goals.”

“But it was a question of pride, of pride. When you are not at the level that you should be, it can happen that you fall behind. There, we were under what we are capable of doing. Things changed with words.”

Spain vs. France. The UEFA Nations League final is set 🍿

“That is what I am here for. When things are going less well I say that too. Aside from that, it is they who deserve it. Each of them individually. The one we pulled back came from us having a stranglehold on the game, with more aggressiveness. Maybe the Belgium team had gone down physically too.”

Kylian Mbappe was made the scapegoat at the Euros this summer after his missed penalty kick led to France’s elimination from the tournament. However, the attacker put the setback behind him as he finally made up for that miss with a splendid effort from the spot yesterday.

Les Bleus shockingly went two goals down in the first half of their UEFA Nations League clash with Belgium. They needed a miraculous turnaround in the second half. Karim Benzema pulled one back shortly after the restart and Kylian Mbappe restored parity with his spot kick.

Theo Hernandez scored in the 90th minute to seal a spot for France in the final of the competition. They will take on Spain in the decider on Sunday, October 10.

Denial of responsibility! NewsUpdate is an automatic aggregator around the global media. All the content are available free on Internet. We have just arranged it in one platform for educational purpose only. In each content, the hyperlink to the primary source is specified. All trademarks belong to their rightful owners, all materials to their authors. If you are the owner of the content and do not want us to publish your materials on our website, please contact us by email – [email protected]. The content will be deleted within 24 hours.
Belgiumbelgium footballbest sports newsDeschampsDidierDidier DeschampsFootballFrance