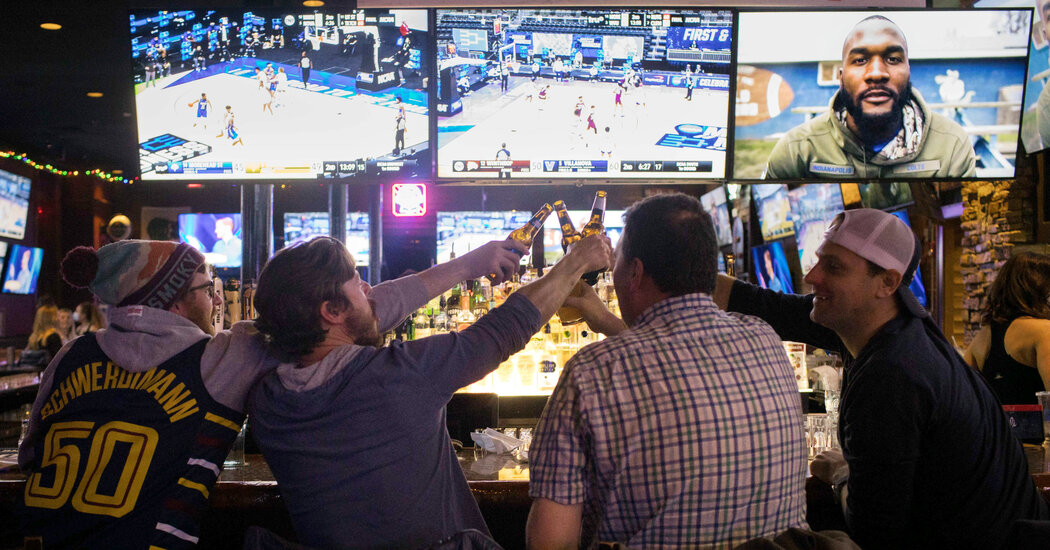 The Return of March Madness Brought Back Hope

Was it Connecticut’s Paige Bueckers floating in the lane for soft jump shots and nailing 3-pointers during her team’s comeback win over Baylor in the Elite Eight?

Was it Gonzaga’s Drew Timme dribbling and spinning for whirlybird layups as his Bulldogs steadily mowed down their bedraggled opponents?

Was it the sight, once again, of Sister Jean, Loyola-Chicago’s 101-year-old marvel of a chaplain, sitting in her wheelchair in the stands, giving a thumbs-up to her squad for its second-round win over Illinois?

For me, all the above, and more, much more, made this year’s N.C.A.A. basketball tournaments feel different from any other sports event played during the coronavirus pandemic. I felt an emotion I’d nearly forgotten could exist while watching sports: joy. Pure, unadulterated joy.

These tournaments marked a unique milestone. In mid-March 2020, the N.C.A.A. tournaments became the first big time American sporting events to be outright canceled because of the virus. Time has had its way with us ever since. It stretched and bent like toffee. Has it really been 12 months, or much, much longer? The shuttering of college basketball’s annual showcases happened with such a jolt, and caused such a shock, that it foreshadowed a year of daily, dreadful uncertainty.

Even as the pandemic raged, nearly every other significant sporting event in America ended up being played, in some form. Not long after the United States suffered its 300,000th coronavirus death, LeBron James won his fourth N.B.A. title inside the restricted-access landscape of Walt Disney World near Orlando, Fla. The grim death count sped past 400,000 in January, right around the time Alabama laid a whupping on Ohio State in the College Football Playoff championship game.

The virus wasn’t just out of control — there seemed to be no end in sight. Tom Brady’s Super Bowl win came smack in the middle of yet another terrible surge. If you’re like me, a fan of sports who cares more about the greater good than my favorite team or player, you were of course drawn to the magic of these mega-events. But you watched these shimmering championships with the gnawing feeling that they shouldn’t be happening with the virus still out of control.

Yet here we are. For all that is flawed about collegiate athletics, good fortune blessed this year’s N.C.A.A. basketball tournaments: They played out against a fresh backdrop. Infection rates, deaths and hospitalizations are down over all. Vaccines are arriving across the country, being pumped into more and more arms each day. Soon we’ll move past 20 percent of the population inoculated, with the rate climbing fast. President Biden in March signed a $1.9 trillion relief package.

True, there remains much recovery work to be done. Aggressive new variants are taking their toll, sparking fears of a looming fourth wave of infection, and the tournaments provided a reminder of the stark reality. Hit by multiple positive tests for the virus, Virginia Commonwealth was knocked out of the men’s tournament without playing a game. Members of the men’s teams from Oklahoma and Georgia Tech tested positive, but not enough of them to force cancellations.

Will we stay vigilant amid the continued challenge? Or will we fall for the thinking of people like Kim Mulkey, the Baylor women’s coach, who said daily testing of teams should be suspended during the Final Four, just to ensure the last games went off without a hitch?

Both tournaments, played entirely in Indiana and Texas this year, breaking the tradition of spreading them across the country in the early rounds, have allowed fans to fill stadiums to a quarter of normal capacity. That’s a risky move. It’s also, unfortunately, in line with the overall trend in American sports.

Consider Major League Baseball, which began its season last week. Most teams are now allowing a limited but significant number of fans. All seem poised to bring in more, pandemic be damned. The Texas Rangers will start their home season Monday with Globe Life Field operating at full capacity. That’s a potential 40,000 fans packed together tight.

“I think it’s not responsible,” Biden said last week. He rightly called the move a mistake and asked that the Rangers heed the advice of scientists who say that many people gathering in one place can spark a virus wildfire.

We’re clearly not there yet when it comes to taming Covid-19.

But looking at it with a wide view, we’re closer. An end to the suffering can at least be seen, out there on the not-too-distant horizon.

Which is why, during these past few weeks of college basketball, it felt OK to suspend some of the old worries.

There were so many sterling moments to behold. It’s hard to pin down when I first realized that these tournaments seemed somehow different than anything I’d watched over the past year — or which memory I loved most.

Was it seeing South Carolina’s stupendous and underappreciated women’s head coach, Dawn Staley, cut down the nets after her team dismantled Texas to advance once again to the Final Four?

Was it U.C.L.A.’s men rising from barely making the tournament to marching through it in John Wooden’s home state, as if the spirit of the great one was at their side?

Was it the powerful steadiness of Stanford’s women, the smooth confidence of Arizona’s Aari McDonald, or Gonzaga’s Jalen Suggs pulling up from distance with less than a second on the clock in overtime?

Maybe it was something simple and spiritual: witnessing the ardent, loving faith that Sister Jean has for her team.

Whatever the reason, joy returned. Now may that feeling remain.

Denial of responsibility! NewsUpdate is an automatic aggregator around the global media. All the content are available free on Internet. We have just arranged it in one platform for educational purpose only. In each content, the hyperlink to the primary source is specified. All trademarks belong to their rightful owners, all materials to their authors. If you are the owner of the content and do not want us to publish your materials on our website, please contact us by email – [email protected]. The content will be deleted within 24 hours.
best sports newsbroughthopeMadnessMarchnews update sportsnewsupdatereturn