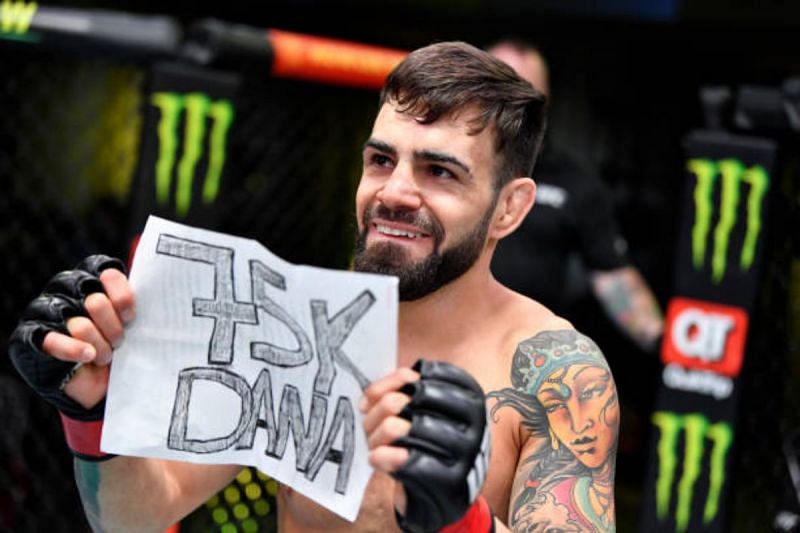 Bruno Silva took out a paper sign asking Dana White to reward him with a $75,000 performance bonus following his win over Victor Rodriguez at UFC Vegas 27.

The 31-year-old finished Rodriguez in exactly one minute with a huge right hand that sent the American to the canvas.

For UFC 262, White had granted Tony Ferguson’s wish of increasing the performance bonus payout to $75,000. Silva tried convincing the UFC president to do the same once again at UFC Vegas 27.

While it is likely that the Brazilian will receive the standard $50,000 Performance of the Night bonus, Silva asking for $25,000 more left MMA Twitter with mixed reactions.

Some fans had a nice chuckle over Silva’s appeal to Dana White, whereas some were disappointed with the fact that he had to “beg” for an increase in the post-fight bonus.

Bruno Silva holding up a sign that says “75k Dana” written on it… They literally have to beg from their proper wages on signs I’m sick but also I know the photoshop legends on here are gonna have a ball anytime fighters hold up a sign ????

Fighters begging for bonuses is not a good look. Pay them right.

I love how Bruno Silva had that 75k picture ready to show he knew he had that W in the bag ??#MMA

Bruno Silva’s win over Victor Rodriguez was his second straight finish in the UFC. His last fight was against JP Buys, whom he defeated via TKO in March earlier this year.

At UFC Vegas 27, Silva didn’t pull any punches. The 31-year-old started the fight aggressively right off the bat. He caught Rodriguez with a right hand before stunning him with a knee in the clinch.

Watching his opponent retreat, Silva waded in to land a massive blow that flatlined Rodriguez.

After succumbing to two defeats in 2020, Bruno Silva seems to be on a right track in 2021, unlike Victor Rodriguez, whose UFC journey doesn’t look too promising.

‘Vicious’ made his promotional debut in October last year against Adrian Yanez. He lost the fight after Yanez stung him with a thunderous head kick.

His most recent loss at the hands of Silva was also a 60-second knockout, keeping him on the edge of being cut from the UFC.

Denial of responsibility! NewsUpdate is an automatic aggregator around the global media. All the content are available free on Internet. We have just arranged it in one platform for educational purpose only. In each content, the hyperlink to the primary source is specified. All trademarks belong to their rightful owners, all materials to their authors. If you are the owner of the content and do not want us to publish your materials on our website, please contact us by email – [email protected]. The content will be deleted within 24 hours.
begbest sports newsbonusbringingBrunoDana WhiteliterallyMMA

Virgin Media and O2 merger approved, but what does that mean for existing customers?