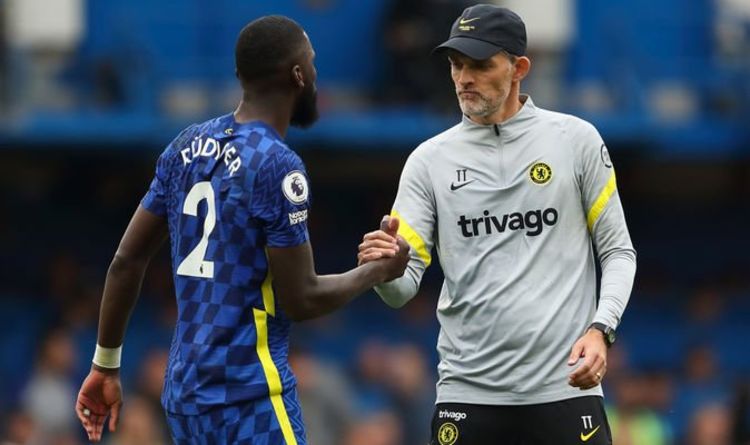 Thomas Tuchel is pushing Chelsea to resolve their contract differences with Germany defender Antonio Rudiger and get a new deal agreed.

Talks between centre-back Rudiger and the club have ground to a halt after the 28-year-old, whose current deal runs out out at the end of this season, rejected Chelsea’s opening offer.

Rudiger will be free to talk to interested clubs in January – and Tottenham, who tried to sign the German international last season, still want the commanding, experienced defender.

Also watching the situation closely are Bayern Munich, Real Madrid and Paris Saint-Germain, all expected to jump at the chance to sign one of the most experienced defenders in European football.

Rudiger has been an everpresent in Tuchel’s side this season, playing every minute of every Premier League game so far.

MUST READ: Thomas Tuchel hits out at FIFA as Blues left in ‘impossible’ situation

Sources close to the German defender insist that Tuchel is urging the club to tie down a deal soon.

The former Roma defender, who joined Chelsea in a £29million deal in July 2017, is outside the top earners at Stamford Bridge on one around £100,000 a week.

That is less than homegrown products like Callum Hudson-Odoi and Ruben Loftus-Cheek.

He has been offered around £125,000 a week, but that offer was turned down despite it representing a pay rise.

Rudiger has re-established his place in the Chelsea side this season under Tuchel, after being left on the sidelines for long spells by previous manager Frank Lampard.

“I feel him very calm and focused, and it’s not a distraction for him. So everything is in place, and give things the time they need.

“Sometimes it needs a bit longer, sometimes things are very fast. There’s no news from my side, and I think that Toni feels very, very good at Chelsea.

“He feels very respected by his team-mates and he feels the importance that he has in the team and in the squad.

“That’s well deserved because he delivers, he feels the love from the supporters when he plays.

“He’s in the strongest league in Europe, in a big club, so not many reasons to change that.”

Denial of responsibility! NewsUpdate is an automatic aggregator around the global media. All the content are available free on Internet. We have just arranged it in one platform for educational purpose only. In each content, the hyperlink to the primary source is specified. All trademarks belong to their rightful owners, all materials to their authors. If you are the owner of the content and do not want us to publish your materials on our website, please contact us by email – [email protected]. The content will be deleted within 24 hours.
Antoniobest sports newschelseademandingdisputelurknews update sportsnewsupdate