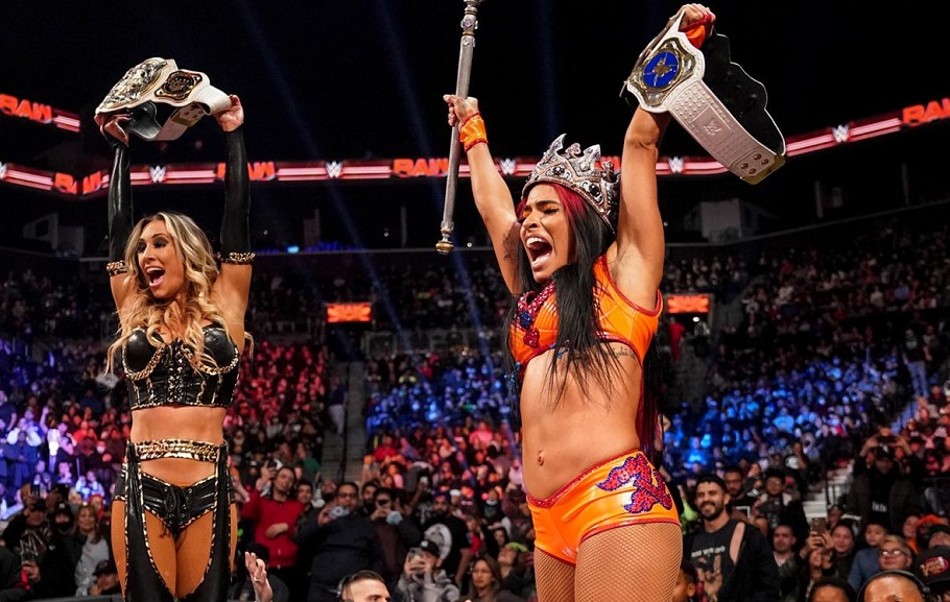 Vince McMahon was in the house to pull up the rating for WWE’s flagship show. Also, four championship matches were on the card out of which two of them witnessed titles changing hands.

Carmella and Queen Zelina Vega are the new WWE Women’s Tag Team Champions as they defeated Rhea Ripley and Nikki A.S.H. to win the straps. The heel duo earned the championship match by pinning the former champions, two weeks ago.

During the title match, Nikki was dominating Vega and went for a pin-fall attempt which was broken by Carmella. Ripley gave a chase to Mella but got eventually dropped with a Superkick.

Mella also superkick-ed Ripley and sent her face-first into the ring post. With the referee being distracted, Nikki got double-teamed by the challengers. Carmella delivered a cheap superkick on Nikki, allowing Vega to hit her with the Code Red to pick up the win.

This is the first title reign for Carmella and Zelina Vega as a team which also marks the first-ever title run for Vega in her WWE career. Ripley and Cross held the titles for 63 days after winning the straps from Tamina Snuka and Natalya on the September 20 episode of RAW.

In another title change from this week’s Raw, Dana Brooke became the new WWE 24/7 Champion.

Originally, Cedric Alexander captured the 24/7 Title from Reggie in a singles match during the post-Survivor Series 2021 edition of WWE RAW via clean pin-fall after hitting his finisher, Lumber Check.

After that match, a group of Superstars chased the 24/7 Champion as the championship rule went back into effect. Brooke was in that bunch, who suddenly connected with a top rope neckbreaker to pin Alexander o win the strap.

Brooke then stood tall in the middle of the ring to celebrate her win while the male Superstars were confused whether they would go after the female champion standing in front of them.

Alexander briefly held the strap, last night in his third 24/7 Title reign on Raw while Reggie held the 24/7 Title for 14 days. It was his second run which started by defeating ex WWE Superstar Drake Maverick on the November 8 RAW.

In the other championship matches on this week’s Raw, United States Champion Damian Priest defeated Smackdown’s Sami Zayn to retain in a cross-brand affair while WWE Champion Big E successfully retained against Austin Theory in the main event match.

Denial of responsibility! NewsUpdate is an automatic aggregator around the global media. All the content are available free on Internet. We have just arranged it in one platform for educational purpose only. In each content, the hyperlink to the primary source is specified. All trademarks belong to their rightful owners, all materials to their authors. If you are the owner of the content and do not want us to publish your materials on our website, please contact us by email – [email protected]. The content will be deleted within 24 hours.
best sports newschampionscrownednews update sportsnewsupdateRawseriessports news

These Airtel prepaid tariff plans haven’t been updated yet | 91mobiles.com