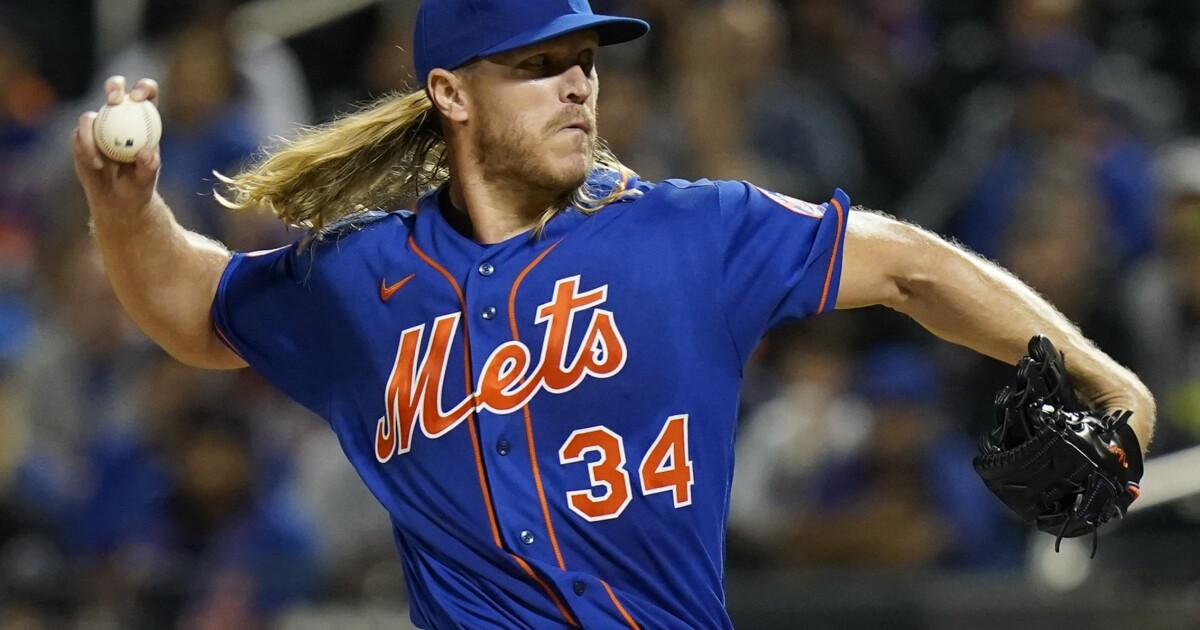 ‘Time for a change’: How the Angels wooed Noah Syndergaard away from the Mets

It was where the starting pitcher had spent his entire big league career. Where he reached the World Series as a rookie in 2015 and became an All-Star in 2016. Where he made a return from Tommy John surgery this past season.

And where, on the eve of his free agency last month, he expressed a strong desire to return next year.

“It would be a tough pill to swallow,” he said, “not wearing a Mets jersey next year.”

On the other side of the country, however, one team had the right-hander in its sights.

The Angels knew they needed pitching. They sought aggressive arms capable of setting a tone for their staff. And they quickly identified Syndergaard as a risky but potentially transformative option, one capable of kickstarting what they hope will be an extensive winter makeover on the mound.

“It was somebody we had our eye on at the beginning of the offseason,” Angels general manager Perry Minasian said. “Going through each and every available player, he stood out.”

What followed was an all-out pursuit from the Angels, a glaring lack of contact by the Mets and an eventual change of heart from Syndergaard. The hard-throwing 29-year-old signed a one-year, $21-million contract with the Angels — the largest single-season salary for a pitcher in franchise history — and discussed publicly it for the first time during a video call with reporters Friday.

“I think it was time for a change in scenery, just so I could get back to my old self,” Syndergaard said, adding, “It was the hardest decision of my life, but I definitely think I made the right decision.”

Long before Syndergaard started thinking about the Angels, the club’s personnel were busy vetting him.

From 2015 to 2018, Syndergaard was one of the sport’s best young pitchers, posting a 2.93 ERA over his first four seasons while averaging nearly 10 strikeouts per nine innings.

But he suffered a setback in 2019 with a career-worst 4.28 ERA. Then he underwent Tommy John surgery the following spring, keeping him out for all of 2020 and, after another setback this May, almost all of 2021.

Hoping to finally build a pitching staff capable of competing for a playoff spot, the Angels still saw Syndergaard as a high-upside option whose acquisition would allow them to maintain enough financial flexibility to make other moves this winter and beyond.

But first, they needed to make sure there were no red flags that might affect his performance in 2022.

“As far as man hours, the amount of work we’ve done,” Minasian said, “I don’t know if I’ve ever done more on an individual player.”

That process began early in the offseason and involved input from people across the Angels organization. Members of the front office, coaching staff, analytics department and medical team all reviewed Syndergaard’s two one-inning starts at the end of 2021 and his underwhelming 2019 performance, comparing them to the peak years earlier in his career.

They dissected film and scoured the underlying data on his pitches, ensuring there were no apparent health concerns, while also looking for ways Syndergaard could tap back into his raw potential.

By the end of it, “we feel good with where he’s at and his rehab,” Minasian said, noting that Syndergaard — who said his Tommy John recovery is complete and he is back at 100% — had no issues pop up during a physical prior to Tuesday’s signing, either.

Added Minasian: “I think it’s a good gamble to take.”

First, though, they still had to woo Syndergaard to come west.

It began on the opening day of free agency. Syndergaard said the Angels were the first team to express interest.

Talks ratcheted up at last week’s general manager meetings, when Minasian and other executives met with the pitcher’s agent from CAA Sports, Ryan Hamill.

Minasian requested an in-person audience with Syndergaard as well, flying to New York last Friday for a dinner with the player and agent that lasted almost three hours.

“Just from the get-go at the start of that dinner, I could sense his passion and his desire to win right now,” Syndergaard said. “That got me really fired up.”

Minasian came prepared with an individual game plan for Syndergaard, too.

They discussed the benefits of the Angels’ six-man rotation, which Syndergaard believes will help him manage a yet-to-be-determined workload (a position similar to Shohei Ohtani‘s this past season, when the six-man rotation helped the two-way star throw more than 130 innings across 23 starts).

“My understanding is there will be some sort of [innings] limitation,” Syndergaard said. “But I’m confident the six-man will definitely help me stay healthy.”

Minasian also impressed the pitcher by proposing specific mechanical adjustments the team thinks could help him in 2022, providing a level of analysis Syndergaard hadn’t often received directly from a general manager.

“It was a breath of fresh air to hear that, to know his baseball knowledge,” Syndergaard said. “He was able to break down some of the flaws I had over the past couple years. … I trust that what they saw, they’re going to be able to fix, and I’ll get back to my old self.”

Minasian came away equally impressed. He’d had previous interactions with Syndergaard, back when he was part of a Toronto Blue Jays front office that drafted the right-hander in the first round in 2010 before trading him to the Mets in 2012.

But the two had never engaged in such a deep conversation. Minasian had never before gotten such an intimate look at the pitcher’s competitive makeup.

“The kind of person he is, how dedicated he is, how knowledgeable he is,” Minasian said, “I think he’s going to have a huge effect, a very impactful influence.”

Syndergaard still had other options to consider. He’d been extended an $18.4-million qualifying offer by the Mets for 2022, but said he “didn’t really hear from them all that much within the last two months.”

The Mets, after all, were still searching for a new general manager. Their coaching staff had yet to be set. And while Syndergaard had fond memories with the club, he had concerns about a potential return.

“I didn’t want to gamble on that kind of uncertainty,” he said.

Other clubs were interested, including some that Syndergaard said made multiyear offers for less in annual average value. But he still preferred a one-year deal, confident in his ability to raise his stock this year before reentering the market next winter.

Through that lens, he saw the Angels as his best choice. Their terms appealed most. He was sold on their plan. He had heard from veteran reliever Steve Cishek, one of his workout partners, who told him that playing in Anaheim last season “was the most fun he’s ever had playing baseball.”

Thus, the pitcher who once never wanted to leave New York decided it was a move he had to make. On Tuesday night, his signing with the Angels was official. And Friday, Syndergaard spoke of his new home with a smoldering excitement, discussing his future with a subtle smile.

“I thought it would be a great place for me to have a brand-new fresh start, clean slate,” he said. “I think if I get back to my old self, then the combination of a one-two punch with myself and Shohei and all the young talent the Angels have, I think we can really make a run.”

Denial of responsibility! NewsUpdate is an automatic aggregator around the global media. All the content are available free on Internet. We have just arranged it in one platform for educational purpose only. In each content, the hyperlink to the primary source is specified. All trademarks belong to their rightful owners, all materials to their authors. If you are the owner of the content and do not want us to publish your materials on our website, please contact us by email – [email protected]. The content will be deleted within 24 hours.
Angelsbest sports newschangeMetsnews update sportsnewsupdateNoahsports news

Antonio Brown is vaccinated and willing to get booster on live TV, his attorney says