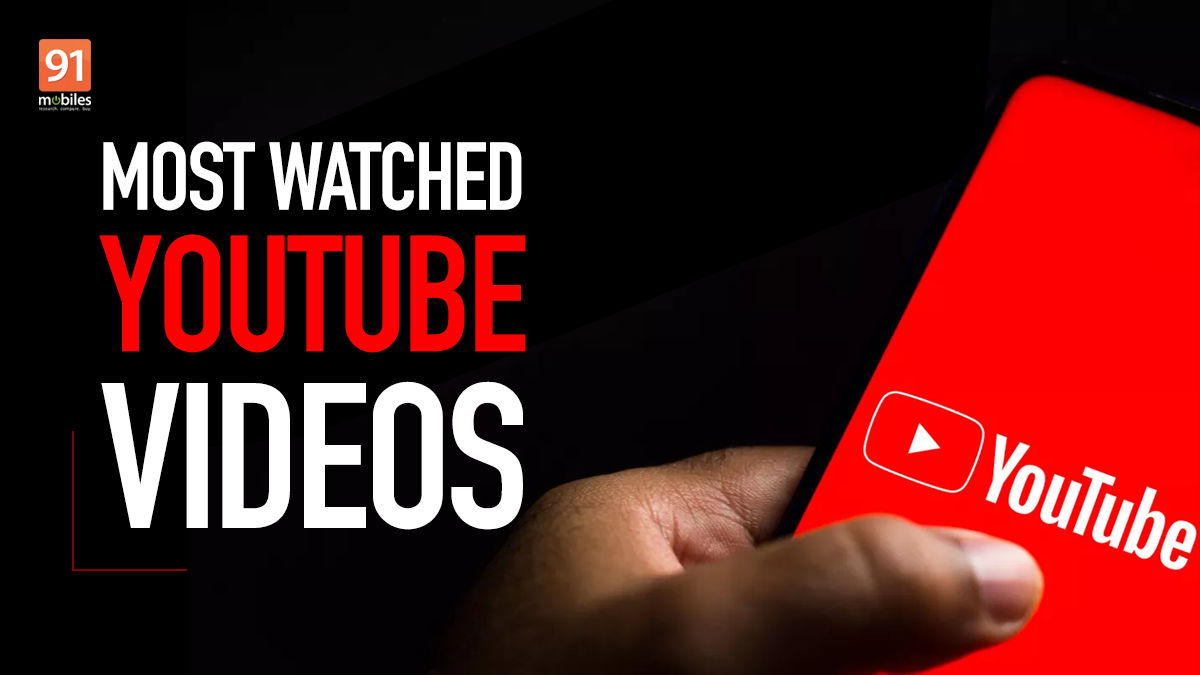 YouTube is one streaming platform that almost every Internet user visits on a regular basis ever since it was launched way back in 2005. From big production music videos to amateur tutorial videos, there is a video for everyone on Google’s video streaming platform. But have you ever wondered which are the most watched videos on YouTube? We have compiled a list of the top 10 most-watched YouTube videos, which have racked up billions of views! Check out the list and enjoy the content.

Baby Shark Dance is the undisputed winner of this battle, with a significant lead over the next most viewed video on the list. It is a popular children’s song and accompanying dance routine from the South Korean educational brand Pinkfong. The song and dance feature a catchy and repetitive chorus of the lyrics “Baby Shark, doo doo doo doo doo doo” along with the simple dance moves that children can easily follow along to, which is the biggest reason why the song has more than 10 million views as of today. What helps is that the song and dance have become a viral sensation on YouTube, with millions of views on various videos featuring the Baby Shark Dance.

Luis Fonsi got the world-humming Spanish lyrics with his mega-hit Despacito in 2017. This popular song by the Puerto Rican singer also features Daddy Yankee. The music video, which was released on YouTube in January 2017, features the two singing and dancing in various locations in Puerto Rico, including on the streets and on the beach. The song’s lyrics are in Spanish and it’s a fusion of Latin pop with reggaeton which helped it become a global hit almost instantly after its release.

“Shape of You” is a song by English singer-songwriter Ed Sheeran, who is known for his several pop hits. But none bigger than this one. The music video was released as a single in 2017 and appears on his album “÷ (Divide)”. It is a pop and dance-pop song with elements of folk and hip-hop. A banjo and a stomping beat bring the lyrics to life, which discuss the beginning of a romantic relationship. The song was a commercial success and has topped charts across English-speaking nations such as the US, Canada, and the UK. It was a big hit in India as well, with several nightclubs still playing it for parties.

Written for the 2015 action film “Furious 7” as a tribute to the late actor Paul Walker, who died in a car accident in 2013, See You Again is one of the top emotionally-charged songs of all time. Featuring Wiz Khalifa and Charlie Puth, the song was released in March 2015 and quickly became a commercial success, reaching number one on the Billboard Hot 100 chart in the United States. The music video features footage from the same movie, Furious 7.

Uptown Funk is a song by Mark Ronson featuring Bruno Mars. The flagship song from Ronson’s fourth studio album, “Uptown Special,” it was released to much fanfare in 2014. The song is a funk-pop and soul track with elements of hip-hop and disco. It reached the top of billboard charts across the US, Canada, and the UK as English-speaking listeners lapped up views on the YouTube music video. Talking about the video itself, you see Mars and Ronson performing the song in various locations around a city, with a group of dancers accompanying them.

Masha and the Bear: Recipe for Disaster (Episode 17)

One of the only non-song videos to make it to our top 10 most viewed YouTube videos list, Masha and the Bear’s “Recipe for Disaster” is an animated video from the popular Russian animated series “Masha and the Bear.” The episode features the mischievous Masha, who is always getting into trouble, and her friend the Bear, who tries to keep her out of harm’s way. In this episode, Masha becomes fascinated with the Bear’s recipe book and decides to make a cake, but ends up causing chaos in the kitchen as she experiments with different ingredients. The reason behind the billions of views is the lovely animation, a soundtrack that keeps you hooked, and a fun storyline that makes it more than a one-time watch. It is suitable for children and families to enjoy together, which increases its view count.

Gangnam Style needs no introduction. It is a music video and song by South Korean artist PSY, which quickly went viral in 2012 and brought South Korea to the global mainstream stage. Not many know this but Gangnam Style was the most-viewed video on YouTube for several years before being overtaken by American music videos. The song is known for its superb parody of the luxurious lifestyle associated with the Gangnam district of Seoul, South Korea, as well as the catchy tune and dance in it. The video features PSY performing a distinctive horse-riding dance, which became popular around the world.

While Maroon 5 is known for several of its peppy numbers, Sugar is undoubtedly the most popular one. It was released as the second single from the band’s fifth studio album, V, back in 2015, and has rewritten fortunes for the band in more ways than one. The music video is interesting in that it features the band performing the song at various wedding receptions, while the guests, who are played by actors, react to the band’s performance. The meta nature of the video and the catchy tune of the song makes this YouTube video watchable several times in one go. At this rate, Sugar could cross 4 billion views in the next few weeks.

Roar is a song by American singer-songwriter Katy Perry. Released as the lead single from her fourth studio album, “Prism,” Roar was a refreshing take on empowerment and liberation back in 2013 when no mainstream singer was really talking about these topics.” The song’s accompanying music video features Perry as a stranded survivor on a deserted island, where she finds the strength to “roar” and eventually becomes the leader of a tribe of survivors. With popularity not waning even 10 years after the release, we could expect the song to cross the 4 billion view mark on YouTube soon enough.

Another song from 2013 that makes it to the top 10 YouTube videos list is Counting Stars by the American pop-rock band OneRepublic. The song is known for its superb vocals and lyrics, both by lead singer Ryan Tedder. Apart from that, the beats make it the perfect song for your house and outdoor parties. That is probably the reason behind its billions of views, with no sign of popularity going down, as is visible from the comments that frequently appear below the video.

Denial of responsibility! NewsUpdate is an automatic aggregator around the global media. All the content are available free on Internet. We have just arranged it in one platform for educational purpose only. In each content, the hyperlink to the primary source is specified. All trademarks belong to their rightful owners, all materials to their authors. If you are the owner of the content and do not want us to publish your materials on our website, please contact us by email – [email protected]. The content will be deleted within 24 hours.
91mobiles.combest technology newsentertainmentfeaturesJanuarymost watched youtube videonews update technewsupdate