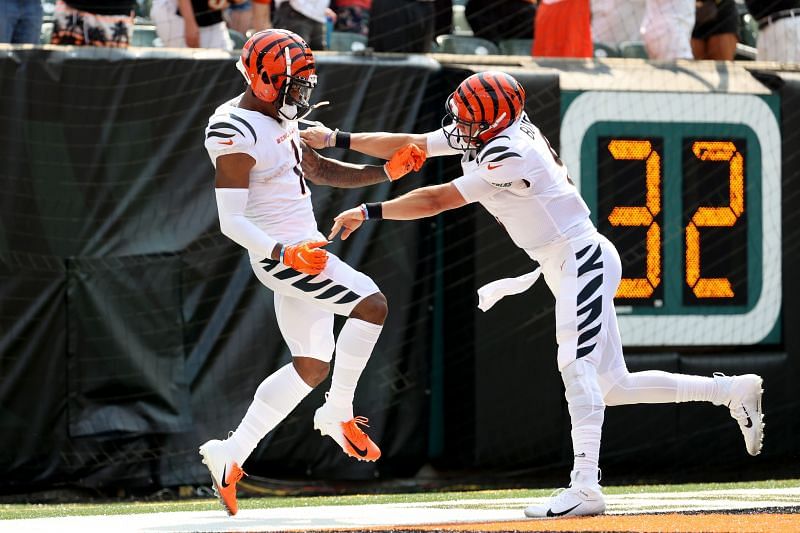 College partnerships develop over the years as players play together in the same programs. In many ways, therefore, it is intuitive to bring former teammates together in the NFL to have the most instantaneous effect. It seems to have become something of a trend now as general managers see the immediate effect they so crave. Here are some college partnerships that their teams hope will lead to greater glory.

#1 – Joe Burrow and Ja’Marr Chase at the Cincinnati Bengals

Quarterback Joe Burrow needed some depth in his wide receiver corps and the Cincinnati Bengals decided to draft Ja’Marr Chase to help him out. Both were teammates at LSU and Chase’s record with Burrow at quarterback was phenomenal. The Bengals will be hoping their calculated gamble brings a return. The first game gave glimpses of hope.

#2 – Jalen Hurts and Devonta Smith at the Philadelphia Eagles

Jalen Hurts, the new quarterback in Philadelphia, needs all the help he can get from his receiving corps in order to succeed. The Philadelphia Eagles noted that and duly drafted his former college teammate in 2021. Jalen Hurts and Devonta Smith were a fabulous college partnership in Alabama and they will be hoping to recreate that magic in the NFL.

#3 – Trevor Lawrence and Travis Etienne Jr. at the Jacksonville Jaguars

Unlike the other college partnerships on this list, this quarterback and running back duo were both taken in the 2021 NFL Draft. As the Jacksonville Jaguars remodeled their entire offense, they looked at two players who had the chemistry to light up both their passing and running games.

#4 – Tua Tagovailoa and Jaylen Waddle at the Miami Dolphins

Like others, this is another quarterback who has been given a wide receiver he knows in the 2021 NFL Draft. They formed a formidable college partnership in Alabama, and much like the situation in Philadelphia, they will be hoping to create their own magic in the NFL.

Tua connects with Jaylen Waddle for his FIRST NFL TD 🔥

Tua connects with Jaylen Waddle for his FIRST NFL TD 🔥

#5 – Jerry Jeudy and Patrick Surtain II at the Denver Broncos

The final nod on our list goes to a pairing on opposite sides of the ball. Jerry Jeudy is a wide receiver with the Denver Broncos, while Patrick Surtain II is a cornerback whose job it is to stop them. The franchise must have seen the upside in reuniting young athletes who know each other for the best camaraderie in the camp.

Denial of responsibility! NewsUpdate is an automatic aggregator around the global media. All the content are available free on Internet. We have just arranged it in one platform for educational purpose only. In each content, the hyperlink to the primary source is specified. All trademarks belong to their rightful owners, all materials to their authors. If you are the owner of the content and do not want us to publish your materials on our website, please contact us by email – [email protected]. The content will be deleted within 24 hours.
best sports newsCincinnati BengalsCollegeJacksonville JaguarsJalen HurtsJoe BurrowListicleMiami Dolphins

“We’re comfortable with where we are”…

Micromax IN Note 2 launched in India; the first sale to go…