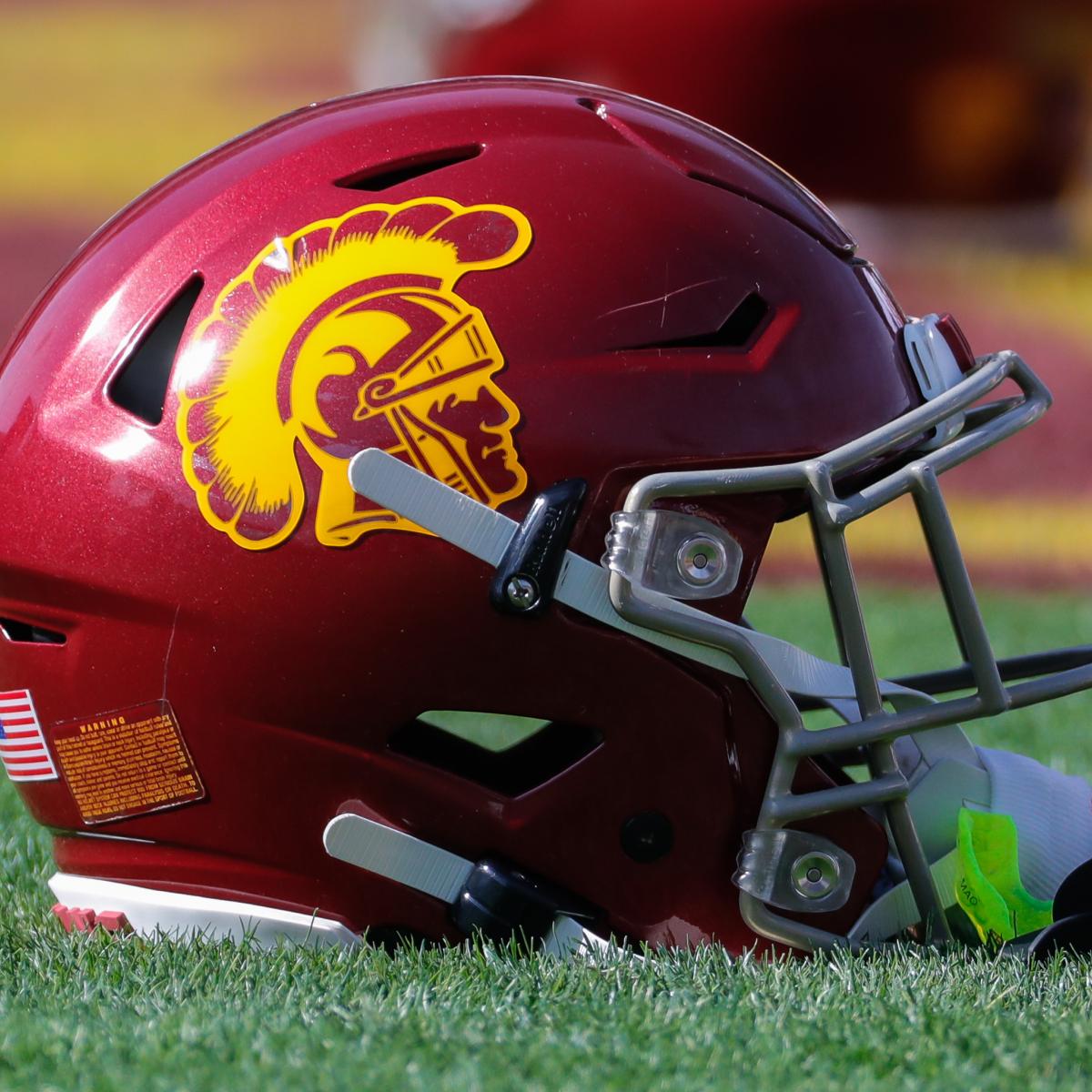 The USC Trojans are officially looking for a new head coach. On Monday afternoon, Trojans athletic director Mike Bohn announced that the school would be parting ways with Helton just days after USC lost to unranked Stanford as double-digit favorites.

Helton has been at USC for a while—he first joined the Trojans staff in 2010 as a quarterbacks coach under Lane Kiffin. He remained on USC’s staff from 2011 to ’15, twice serving as an interim head coach after replacing Kiffin and Steve Sarkisian, who was fired after taking a leave of absence in October 2015. By the end of November, the Trojans named Helton as the program’s new permanent head coach. Helton’s full record with USC was 46-24, interim tags included.

The Trojans will likely be looking for a coach with a lot of head coaching experience, as well as the ability to recruit and win at a high level. As USC begins the search for a new head coach, let’s see who might be the best candidates for the Trojans to consider.

This is one of the biggest names that will be thrown around during USC’s search. James Franklin, who is in his eighth season at Penn State, doesn’t have specific ties to California or the Trojans, but he has led his teams to national prominence everywhere he’s been as a head coach.

It started at Vanderbilt, where he went 24-15, including a school-record-tying nine wins in back-to-back seasons, as well as three consecutive bowl games, which had never been done before. Franklin, a Pennsylvania native, was hired by Penn State in January 2014. It’s gone pretty swell for the Nittany Lions so far, as he led PSU to four straight New Year’s Six Bowl game appearances from 2016 to ’19. During that same span, Penn State won 28 Big Ten games, a school record over a four-year period.

Although the Nittany Lions had a rough 4-5 season last year, they are off to a 2-0 start in 2021 and have a chance to win the Big Ten. Given USC’s money and recruiting resources, it wouldn’t be all that surprising if Franklin made the jump to the West Coast.

Sure, Matt Campbell’s Iowa State team didn’t have the best day on Saturday, losing to Iowa 27-17 at home. But Campbell has found tremendous success in Ames over the last six seasons, and he’s put the Cyclones in the national spotlight like never before.

He already has the best winning percentage as a head coach in program history (.554), and he helped lead the Cyclones to the Big 12 Championship Game for the first time ever last season. In 2020, Iowa State was ranked ninth in the AP Poll’s final rankings, thanks to a Fiesta Bowl win over Oregon. His recruiting classes have been some of the strongest Iowa State has ever seen, too, ranking inside the top 50 in the country.

Prior to heading to Iowa State, Campbell was the head coach at Toledo, where he went 35-15 over five seasons. Campbell doesn’t have as much Power Five coaching experience as some of the other candidates on this list, but he should be considered at USC given what he’s done at Iowa State.

Eric Bieniemy is known most for what he’s done in Kansas City with quarterback Patrick Mahomes, but the veteran coach would be a great fit at USC. In fact, he has plenty of experience coaching in the Pac-12. He played running back at Colorado from 1987 to ’91, and he’s still the school’s all-time leader in rushing yards (3,940) and touchdowns (42).

Bieniemy even started his coaching career at Colorado in 2001 as a running backs coach and had the same position at UCLA from 2003 to ’05. He then spent five seasons at the NFL with the Minnesota Vikings before heading back to Colorado as head coach Jon Embree’s offensive coordinator from 2011 to ’12.

He’s been with the Kansas City Chiefs and Andy Reid since 2013, starting as a running backs coach before being promoted to offensive coordinator in 2018. With Mahomes running the show, Bieniemy’s offense scored the third-most points in a season in NFL history with 565 in 2018, and the Chiefs won Super Bowl LIV in 2019. KC made it to a second consecutive Super Bowl appearance last season, as well.

Bieniemy has never gotten a head coaching job, despite interviewing for some NFL ones over the last few seasons. Could USC be the program to finally give him the opportunity?

Yes, I know Bill O’Brien didn’t have the best performance during his last head coaching gig with the Houston Texans, but hear me out! O’Brien is Alabama’s offensive coordinator, having replaced Steve Sarkisian, who is now the head coach at Texas.

O’Brien came into his new gig having to replace an incredibly talented group of personnel on offense, including Mac Jones, DeVonta Smith and Najee Harris. In his first game as offensive coordinator against Miami in Week 1, the Tide put up 44 points, and quarterback Bryce Young threw for 344 pass yards and four touchdowns, a school record for a QB in his starting debut.

Nick Saban has made a habit of turning former assistants into big-name guys in recent years, too. Sarkisian, Ole Miss’ Lane Kiffin and Oregon’s Mario Cristobal are just a few. Don’t be surprised if O’Brien emerges as a college football head coach candidate as long as his offense keeps putting up big numbers at Alabama, even if USC doesn’t end up calling.

Look, basically every big-name head coaching vacancy will lead to Urban Meyer rumors. No, USC is not one of Meyer’s “dream jobs”—he once referred to Notre Dame as being that—but this would be a good enough gig for him to at least consider bolting the NFL.

It’s not like his debut as Jacksonville’s head coach got off to a fiery start, as the Jaguars were blown out by the Houston Texans 37-21. Inside the Jacksonville program, which is his first stint in the NFL, it’s reportedly already getting a bit chaotic. CBS Sports’ Jason La Canfora reported over the weekend that Meyer’s approach is rubbing staff and players the wrong way, with one source describing it as “not good.” It’s only Week 1 of the NFL season, folks!

Sure, it may be unlikely that Meyer would take another gig so early into the NFL season. But depending on if USC waits until closer to the end of the college football season to name its new head coach, it could be an option for Meyer if things spiral downhill quickly in Jacksonville.

Speaking of Lane Kiffin! Yes, his tenure as USC’s head coach from 2010-13 ended horribly, as the Trojans went 28-15 over four seasons with Kiffin. Famously, Kiffin was literally fired on an airport tarmac while he was boarding the team plane at 3 o’clock in the morning after USC lost to Arizona State in late November of 2013.

Kiffin has come a long way from getting fired on tarmacs, folks. Remember how I mentioned Saban makes some great coaching candidates? At Alabama in three seasons, Kiffin transformed Saban’s traditional run-heavy offense into a high-flying, up-tempo system featuring dual-threat quarterbacks, far from the game manager quarterbacks that Saban typically played. In his last season at Alabama in 2015, he helped led the Tide to an SEC and National Championship with true freshman Jalen Hurts going 13-1 as Bama’s starter.

He was then hired as FAU’s head coach in 2017, where he led the Owls to a program-best 10-consecutive wins to finish his first season there 11-3. He finished his tenure in Boca Raton, Fla. with a 27-13 record before getting hired at Ole Miss.

In his first season at Oxford, the Rebels went 5-5, but Kiffin’s offense against Alabama last season notably put up 647 yards of offense in the 63-48 Rebel loss. That was the most yards given up by a Bama defense ever. Ole Miss returned a lot of that same offense from last year, and is currently eighth in the nation in scoring offense, led by quarterback Matt Corral.

Yes, Kiffin to USC might be a longshot, but a girl can dream, right?

Although Elliott doesn’t have head coaching experience, his offenses have put up some big numbers. From 2018 to ’19, the Tigers had consecutive seasons scoring 650 points—an average of 43 points per game. According to Clemson, the last team to do that was Yale in 1888 and ’89.

He’s also coached the likes of quarterback Trevor Lawrence—the 2021 No. 1 overall pick—and running back Travis Etienne, who set the NCAA record for most games scoring a touchdown (46).

With a resume as impressive as Elliott’s, it’s no surprise that his name has emerged with some big-name coaching searches recently. Elliott interviewed with Tennessee for its head coaching vacancy this past offseason, and he reportedly was interviewed for the open Miami Dolphins’ OC job in January. Elliott does not have the head coaching experience of some other names USC is considering, but his longtime success on Clemson’s staff makes him a strong dark-horse candidate.

Loading...
Denial of responsibility! NewsUpdate is an automatic aggregator around the global media. All the content are available free on Internet. We have just arranged it in one platform for educational purpose only. In each content, the hyperlink to the primary source is specified. All trademarks belong to their rightful owners, all materials to their authors. If you are the owner of the content and do not want us to publish your materials on our website, please contact us by email – [email protected]. The content will be deleted within 24 hours.
Loading...
best sports newsclayFireHeltonnews update sportsnewsupdatereplacementssports news

Plaschke: Get it right this time, USC. Hire somebody who’s somebody as your next football coach