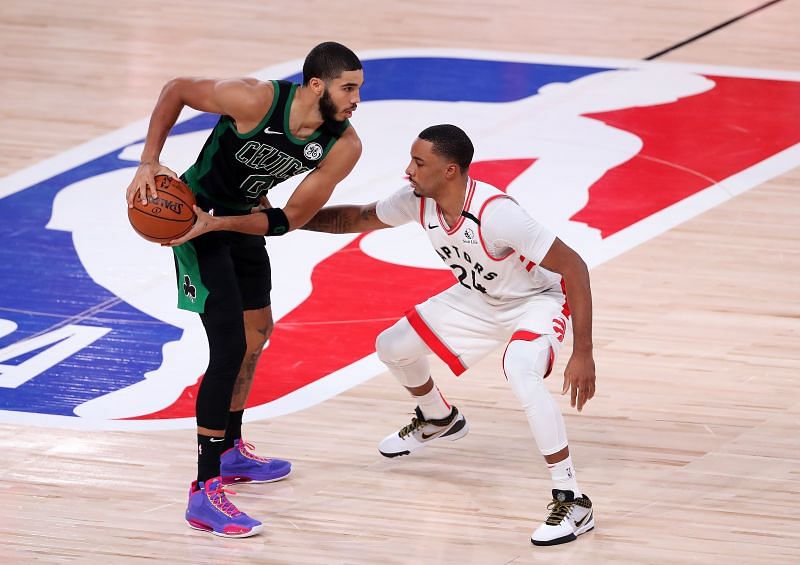 The Toronto Raptors will square off against the Boston Celtics in an NBA 2021-22 preseason game at the TD Bank North Garden in Boston, MA on Saturday. Toronto’s rebuilding effort will come into focus as they battle Boston’s retooled lineup looking to make a deep playoff run after winning only one game in the first round of the 2021 playoffs.

After a home-and-away opening series against the Ben Simmons less-Philadelphia 76ers, the Toronto Raptors are expecting to improve after the solid performances shown by their young blood.

Rookie Scottie Barnes, defensive specialist OG Anunoby and new acquisition Precious Achiuwa have been leading the Raptors’ charge in the preseason. The game against the Boston Celtics would be a good test for their development.

The Boston Celtics, meanwhile, barely edged the short-handed Orlando Magic after a blistering start. Scoring machine Jayson Tatum is expected to carry the cudgels for the Celtics in this game.

Jaylen Brown, who had a sizzling start against the Magic with 16 first-quarter points, is reportedly out of this game after testing positive for COVID-19.

The Toronto Raptors have a few players on their injured, including Pascal Siakam who is out with a shoulder injury. Chris Boucher, who showed improvement last season, is recovering from surgery on a dislocated left middle finger.

Back-up center Khem Birch is under safety protocols, and won’t join the Raptors for this game. Yuta Watanabe, meanwhile, suffered a calf strain, and will sit out the game against the Boston Celtics.

Boston Celtics All-Star Jaylen Brown will be out after getting a positive result in his COVID-19 mandatory test. Brown could potentially be out for the rest of the preseason.

This is a piece of disappointing news for the Celtics, as he was just beginning to get into his groove. A wrist injury had sidelined him towards the end of the last regular season and the entire playoffs.

The Toronto Raptors used the same starting five in their first two preseason games with the Philadelphia 76ers. Coach Nick Nurse could roll out the same lineup against the Celtics to build on the decent work they’ve done in the preseason.

Precious Achiuwa will likely man the middle for the Toronto Raptors.

Ime Udoka has plenty of options to tinker with his lineup after Jaylen Brown’s reported positive COVID-19 test. He might put Josh Richardson in the starting five as the shooting guard. That would enable Dennis Schroder to run the offense when Marcus Smart sits down.

Jayson Tatum is expected to be the small forward unless he is rested. After Juancho Hernangomez’s debut for the Boston Celtics against the Magic, Udoka could use Grant Williams for hustle and defense.

The battle for the starting center position, though, continues for the Boston Celtics. Al Horford could come in after Robert Williams started the game against the Magic.

Denial of responsibility! NewsUpdate is an automatic aggregator around the global media. All the content are available free on Internet. We have just arranged it in one platform for educational purpose only. In each content, the hyperlink to the primary source is specified. All trademarks belong to their rightful owners, all materials to their authors. If you are the owner of the content and do not want us to publish your materials on our website, please contact us by email – [email protected]. The content will be deleted within 24 hours.
9thBasketballbest sports newsBostonBoston CelticsCelticsinjuryJayson Tatum

Grateful to PSG because they have treated me very well, says Lionel Messi

Rumour Has It: Saudi-backed Newcastle enter race for PSG’s Icardi