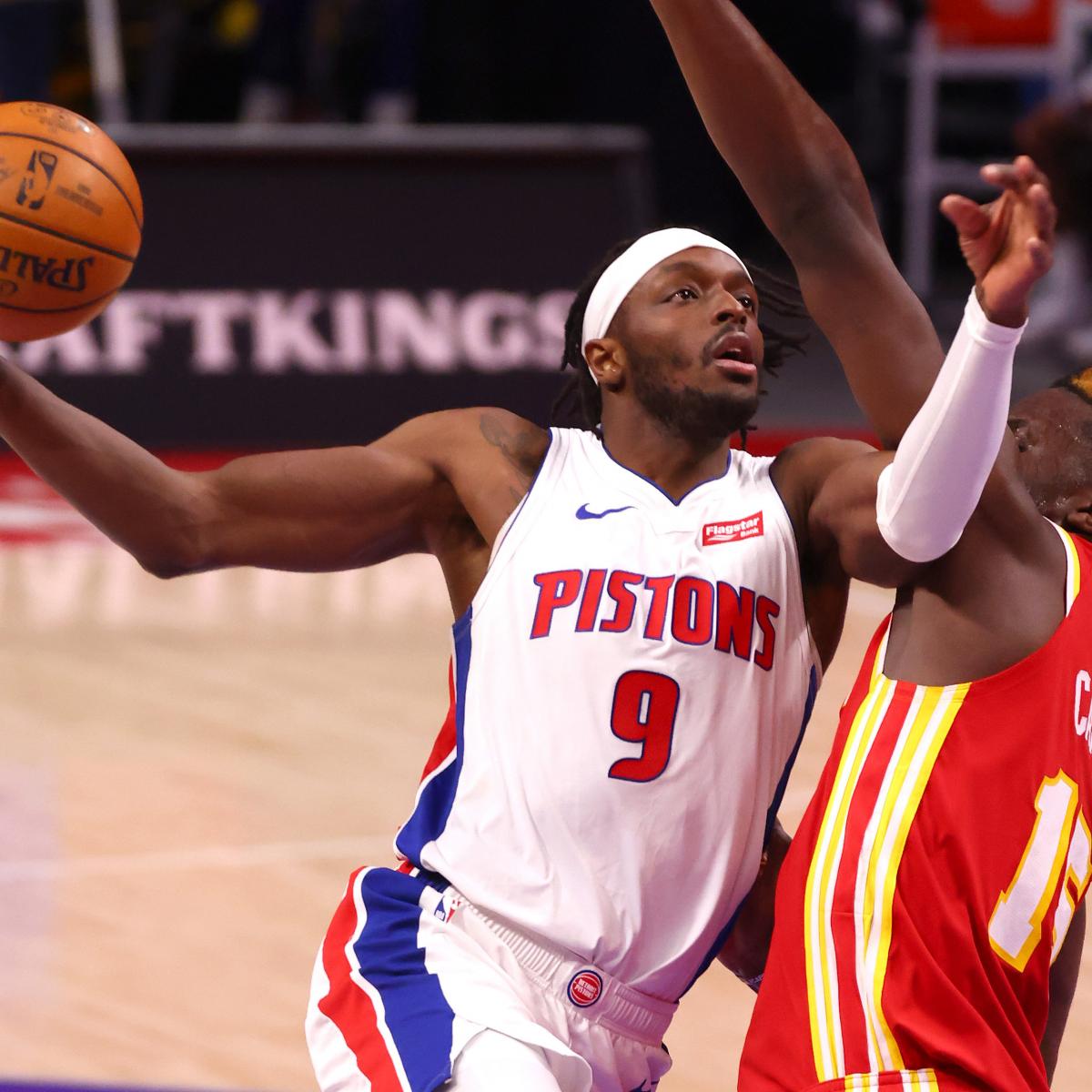 Separating the NBA’s buyers and sellers ahead of the trade deadline has grown exponentially harder this season. Between so many teams with relative proximity to the play-in tournament and a competitive landscape somewhat warped by a COVID-19 surge and the roster turbulence it incites, the league could default to a quiet in advance of Feb. 10.

Let’s go ahead and put on our optimist’s hats and assume the trade deadline will be active, because business as usual is the dream at a time when everyday life remains anything but. And then let’s throw on our front office executive’s pants.

And then let’s cobble together hypothetical blockbuster deals for what should be the NBA’s most open-minded sellers and aggressive buyers.

To be sure, not every prospective option will make the cut. The Golden State Warriors, Milwaukee Bucks and Brooklyn Nets, for instance, will be buyers. But they don’t need to act with urgency. The Los Angeles Lakers absolutely do and are obligated to buy. To what end, though? They aren’t as equipped as others to make a marquee splash.

Fringe cases will similarly be thrown out the window. The Cleveland Cavaliers cannot count themselves as indiscriminately big-time buyers given their rash of injuries. And who the hell knows what the San Antonio Spurs, New Orleans Pelicans, Toronto Raptors, etc. are doing? Our focus instead lies on squads most likely to do something significant, one way or another.

As if the team’s dumpster-fire record wasn’t enough motivation to sell at the deadline, Blazers head coach Chauncey Billups recently acknowledged that shutting down Damian Lillard for an extended period of time is on the table.

Operation “Duck the Luxury Tax” should now commence in Portland.

Anyone lobbying for more wholesale moves will be disappointed. Too bad. The Blazers are currently being run by an interim general manager, won’t trade Dame unless he asks for it and needn’t rush shopping other players under long-term contracts (CJ McCollum).

Expiring deals for Jusuf Nurkic, Anfernee Simons and Covington pose more pressing matters, and the latter is the most logical trade bait. Nurkic doesn’t fit the Blazers’ new defensive aggression but remains more valuable than what they’ll probably fetch for him. Simons isn’t established enough for his restricted free agency to scare Portland.

Covington won’t command a ton of interest given how much his outside shooting has slipped this year, but he still represents the three-and-D concept. New York needs players of that ilk.

Sending out Noel does throw a wrinkle to the center rotation. The Knicks can survive. They have about-to-be-paid Mitchell Robinson and Taj Gibson and should experiment more with Julius Randle-Obi Toppin lineups.

Swapping Covington for Noel gets Portland out of the tax while netting a center who better fits the defensive approach. His $9.2 million salary next season is also a good hedge against Nurkic’s departure, even though he’s not nearly the same offensive force.

Left untouched, Utah is a title contender. But it needs to juice up its wing defense and backup playmaking to be viewed in the same menacing light as Golden State or Phoenix. This deal checks both boxes.

Richardson is (quietly) canning more than 39 percent of his threes and defending everywhere from the point of attack up to heftier assignments. Schroder is erratic, but he’s a passing (and rim-pressure) upgrade over the Trent Forrest minutes.

Jettisoning Ingles is an emotional gut punch. The Jazz can’t afford to care. He has been up and down for most of this season, and his defensive utility is on the decline. Adding Jared Butler and a first-round swap shouldn’t worry Utah.

Things get interesting if the Celtics demand an actual first-round pick. The Jazz can’t provide one until 2026. They’re so win-now it shouldn’t be a deal-breaker, but Boston doesn’t necessarily have the leverage to force their hand. Schroder is a full-on rental as a non-Bird free agent, and the Celtics are cutting more than $3.5 million in payroll, leaving them less than $3 million away from skirting the tax. They can use Ingles’ secondary playmaking and shooting, as well.

Utah’s own tax bill spikes with this package. Whatever. The Jazz are already waist-deep in the tax, and bagging two players who factor into their playoff rotation significantly boosts their title odds.

Smaller permutations of this deal exist if Utah only wants one of Richardson or Schroder. The latter fits into the Derrick Favors trade exception, and Ingles or Jordan Clarkson can be the outbound salary in a Richardson acquisition.

Let’s take this one team at a time.

Oklahoma City is most likely to balk. Williams is really good and under contract for just $2 million next season, and the Thunder aren’t obligated to sell. But this proposal seriously upgrades their first-rounder situation.

Rather than getting a bottom-five selection from Phoenix this season, they’re nabbing a loosely protected pick that either spills into the post-Chris Paul era or conveys after his age-38 campaign while securing a look at Jalen Smith (playing well in real minutes!). If push comes to shove, the Suns can sweeten the package by making this a 2025 first.

Houston should be open to moving Gordon in any deal that guarantees a first-rounder. He’s been great this year, but he’s also 33, not exactly a billboard for durability and owed $19.6 million in 2022-23. Saric will come in handy next year as an expiring contract or frontline option should the Rockets move on from Daniel Theis or Christian Wood.

Orlando shouldn’t have much to mull. Phoenix will foot the bill for Nader’s $2 million salary, and the Magic can waive the injured E’Twaun Moore while snaring a second-rounder for their troubles.

The Suns are not acting without risk. Dealing firsts so far into the future is iffy. They’ll manage. This deepens a perimeter rotation that sometimes needs actual minutes from Payton. Gordon offers outside shooting and above-average rim pressure for his position. Williams is plug-and-play divinity on offense and capable of guarding both wings and bigs at the other end.

Reasonable minds will differ on how far the Pacers should lean into a rebuild. It doesn’t sound like they’re ready to go nuclear—and for good reason. But they’re still primed to make substantial changes.

Turner looms at the likeliest trade candidate. He openly campaigned for a bigger (or clearer) offensive role, and armchair GMs re-litigate his fit with Domantas Sabonis approximately every five seconds. And while Indy’s two bigs can play together, its need for change outshines a chance to be just good enough.

Parlaying Turner into Williams, drafted 10th overall in 2021, and two first-round picks is worth the Pacers’ consideration. They have little use for Adams, but he will be an expiring contract next season and can come off the bench, freeing Sabonis to start and play exclusively at center. (Adams is also a tip-in savant.)

Indiana is not beholden to this package. It can angle for a 2024 first-rounder instead of Williams. It can also ask for Kyle Anderson and Jarrett Culver (both on expiring contracts) instead of Adams. Memphis has many different paths to enticing offers.

The question: Is Turner a fit for the Grizzlies? The answer: Y-E-S.

Memphis has remained on a tear since Ja Morant returned from his knee sprain but needs dependable outside shooting. Turner fills that quota. He’s hitting nearly 36 percent of his treys on 5.4 attempts per 36 minutes.

Turner’s arrival does curb Jaren Jackson Jr.’s usage at center, but that’s of little concern. The two bigs complement each other at both ends, Turner bolsters what has been the league’s best defense since Thanksgiving, and above all, the Grizzlies snag a fringe star without ponying up Desmond Bane.

The Hawks are expected to peddle the combination of Gallinari and Reddish in search of a defensive upgrade, according to The Athletic’s Sam Amick. Grant is among the most obvious players for them to target.

Detroit shouldn’t fret about dealing him. He is extension-eligible this summer, and the team is not close enough to playoff contention to bankroll his next contract, either this offseason or when he hits 2023 free agency.

Turning him into Gallinari, Reddish and a first-rounder better suits the Pistons’ direction. It is also in line with what the Orlando Magic got for Aaron Gordon—who, like Grant, had another season left on his deal: salary filler, a perimeter prospect still on his rookie-scale deal and a future pick.

Gallinari may even emerge as more than matching money. He is guaranteed just $5 million of his $21.5 million salary next season. The Pistons can view him as immediate cap relief or reroute him to a team offloading longer-term contracts.

Whether the Hawks should go the consolidation-trade route is debatable. Caveats and all, they are among this season’s most disappointing teams. But Grant should shore up a leaky defense at both the 3 and 4, and their immediate ceiling explodes once De’Andre Hunter returns and if Bogdan Bogdanovic recaptures form after rejoining the rotation.

Atlanta and Detroit will have to haggle over pick protections. Make no mistake, though: Reddish and Gallinari alone shouldn’t get it done. Grant will have other suitors, even before he returns from his thumb injury, and the Pistons gain a boatload of leverage if the Sacramento Kings don’t put Harrison Barnes on the trade block.

Disclaimer: Yours truly does not think the Celtics should trade Brown. But the sentiment itself also isn’t egregious given how much Boston needs to revamp its offense.

Fox can help. He isn’t the quintessential floor general, but his playmaking exceeds that from Brown, and he maintains the higher ceiling as a self-creator. He should not torpedo the Celtics defense even after they surrender Brown, and they get two additional assets in Davis and a first-rounder, plus a swap they could theoretically use. They can also leave Davis in Sacramento in favor of almost getting out of the tax.

Sacramento needs to do something—anything. Damning itself to a treadmill of sub-mediocrity is inexcusable.

This urgency doesn’t have to include trading Fox, but Simmons’ all-world defense and playmaking pairs nicely, perhaps even better, with Tyrese Haliburton. Jaden Springer is a recent first-round pick and flier on the wings. The Kings may not even need the 2023 swap.

Philadelphia finally moving Simmons would be a godsend for all of us. And this deal just so happens to net a potential All-Star. Brown isn’t a traditional shot-creator and won’t replace any of Simmons’ passing, but his familiarity working off-ball should enable synergy with Joel Embiid, and Tyrese Maxey’s ascension allows the Sixers to target players who aren’t primary ball-handlers.

Figuring out the peripheral compensation induces migraines. Brown is the best player in this deal, so extra assets should be coming out of Philly. Maybe they’re divvied up differently among Boston and Sacramento, but this general framework sure seems like a conversation starter—insofar as the Celtics haven’t designated Brown off-limits.

Dan Favale covers the NBA for Bleacher Report. Follow him on Twitter (@danfavale), and listen to his Hardwood Knocks podcast, co-hosted by NBA Math’s Adam Fromal.

Denial of responsibility! NewsUpdate is an automatic aggregator around the global media. All the content are available free on Internet. We have just arranged it in one platform for educational purpose only. In each content, the hyperlink to the primary source is specified. All trademarks belong to their rightful owners, all materials to their authors. If you are the owner of the content and do not want us to publish your materials on our website, please contact us by email – [email protected]. The content will be deleted within 24 hours.
best sports newsbiggestbuyersideasNBAsnews update sportsnewsupdateSellers