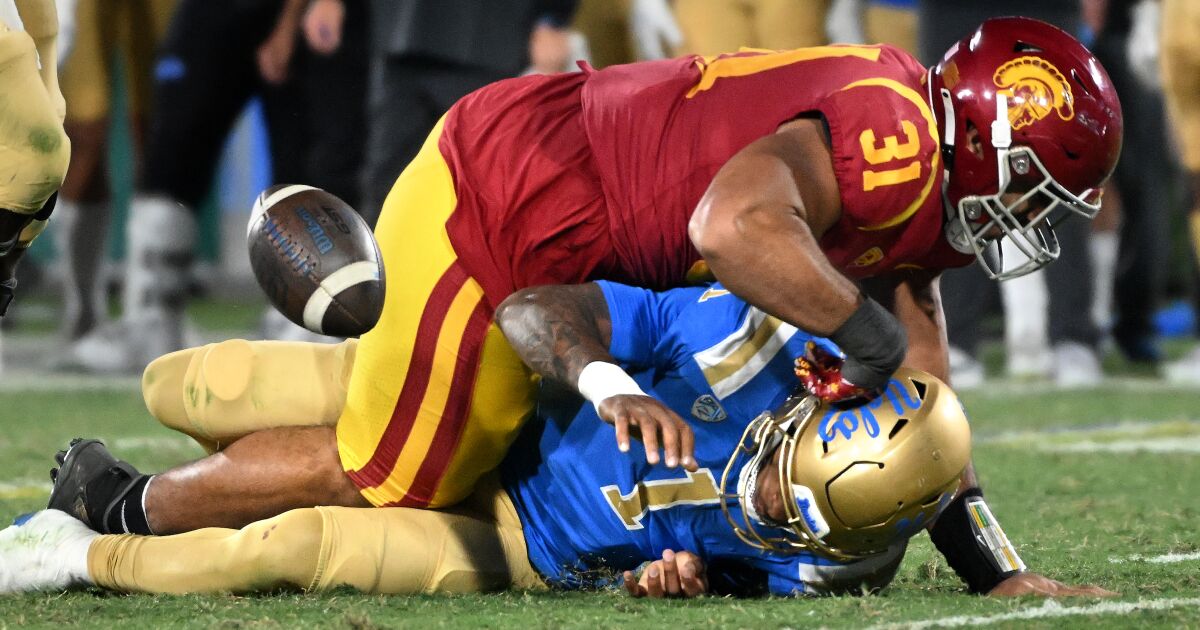 Caleb Williams climbed a red ladder in the south end zone of the Rose Bowl, raising a sword in the air as the Trojan Marching Band serenaded the traveling Trojan faithful with USC’s ubiquitous fight song.

This couldn’t have been the way Dorian Thompson-Robinson imagined his career in the Rose Bowl would end.

Williams outdueled Thompson-Robinson in a rivalry shootout 48-45 as No. 7 USC (10-1, 8-1 Pac-12) clinched its spot in the Pac-12 title game and eliminated the No. 16 Bruins from championship contention. While USC’s first-year rebuild under Lincoln Riley continues at warp speed, UCLA (9-3, 5-3) is still trying to reach the summit after a five-year climb with Chip Kelly.

“We came up short and it’s tough when you talk to them after a game to put it into words,” coach Chip Kelly said. “That you can play with the effort that you played with tonight, but that wasn’t good enough. Sometimes it’s a very tough lesson for all of us to learn.”

UCLA’s defense was already shorthanded without starting cornerback Devin Kirkwood and defensive coordinator Bill McGovern. Then the Bruins had to face a Heisman contending quarterback.

Kelly called Williams “as good a quarterback as I’ve faced in my college career.” The USC sophomore torched the Bruins for 470 yards and two touchdowns on 32-of-43 passing with 33 rushing yards and two scores on the ground. UCLA sacked Williams twice, including a big tackle from Laiatu Latu that gave UCLA a final chance with 2:27 remaining, but he wiggled out of numerous other attempts and created big plays by completing passes on the run.

“He does a great job of extending plays, he’s extremely athletic, he’s as accurate as you can be throwing the football,” Kelly said. “So I think it’s that combination: he’s his rare dual threat guy who can beat you with his legs as well as his arm, sometimes guys are more of a runner, but he throws it as well as anybody I’ve seen.”

USC rolled up 649 yards, the most for a UCLA opponent since Washington State’s 720 yards in 2019, which is the modern record against the Bruins. The Trojans averaged eight yards per play, a season-high allowed by the UCLA defense.

Thompson-Robinson claimed two more school records in the shootout, passing Brett Hundley for the total offense mark with 11,953 for his five-year career, and taking the top spot in total touchdowns with 110 after six scores. But even after four passing touchdowns and two more on the ground, Thompson-Robinson was haunted by his four turnovers, which included three interceptions and the game-clinching pick to Korey Foreman.

“I feel disappointment, a lot of it on myself,” said Thompson-Robinson, who finished with 309 yards and four touchdown passes on 23-of-38 passing. “At the quarterback position you can’t have three [interceptions] and win the game, it’s just not acceptable.”

Thompson-Robinson, who entered the game with just four interceptions on the year, noted he didn’t “get enough juice” on the ball on his first two interceptions. He was playing with tape on his hand after running physically in the first half. He said he regrettably didn’t go all the way through his progressions on the pivotal final interception when USC dropped eight players into coverage.

The miscues played right into USC’s defensive strengths as the Trojans lead the country in turnover differential. In four starts against USC, Thompson-Robinson has thrown eight interceptions, turned the ball over nine total times and won only once.

UCLA honored 27 seniors before the game, many of whom helped lay the foundation for Kelly’s tenure that began in 2018. While transfers have dominated college football in recent seasons, including key imports like UCLA’s Zach Charbonnet and Jake Bobo, members of Kelly’s first recruiting class starred for the Bruins in their final home games. Wide receiver Kazmeir Allen led UCLA in receiving with five catches, 72 yards and one touchdown. Blaylock had 11 tackles. Tight end Michael Ezeike had three touchdowns on four catches.

“After tonight, [we] have realized that, that this is a special group of seniors, one that will be talked about for a very long time here at UCLA,” Thompson-Robinson said. “I just can’t wait to go back out there last week and play one last time for sure.”

Thompson-Robinson walked out of the tunnel after his postgame interview for a final look at the Rose Bowl field, and two UCLA fans were still lingering on the upper concourse. They shouted down to the quarterback, who turned and raised his hands in the shape of a heart.

Not only did the loss drop UCLA out of championship contention, it will knock the Bruins down the Pac-12 pecking order for bowl games. The conference has six main bowl affiliations, starting with the Rose Bowl, which is reserved for the conference champion. If the champion is invited to the College Football Playoff, then the second team plays in the Rose Bowl.

After that, San Antonio’s Alamo Bowl chooses first, followed by the Holiday Bowl in San Diego, the Las Vegas Bowl, the Sun Bowl and the L.A. Bowl. If UCLA, which finishes the regular season against California on Friday, ends as the third-place team, it’s possible the Holiday Bowl skips the Bruins, who had to abruptly cancel last year’s game because of a COVID-19 outbreak on the team that wasn’t revealed until hours before kickoff.

Denial of responsibility! NewsUpdate is an automatic aggregator around the global media. All the content are available free on Internet. We have just arranged it in one platform for educational purpose only. In each content, the hyperlink to the primary source is specified. All trademarks belong to their rightful owners, all materials to their authors. If you are the owner of the content and do not want us to publish your materials on our website, please contact us by email – [email protected]. The content will be deleted within 24 hours.
best sports newsDorianHauntLossnews update sportsnewsupdatesports newssports update

Vivo X90 specifications teased by the company before the launch: All details

Check out the Street Fighter 6 themes for veterans Dhalsim…