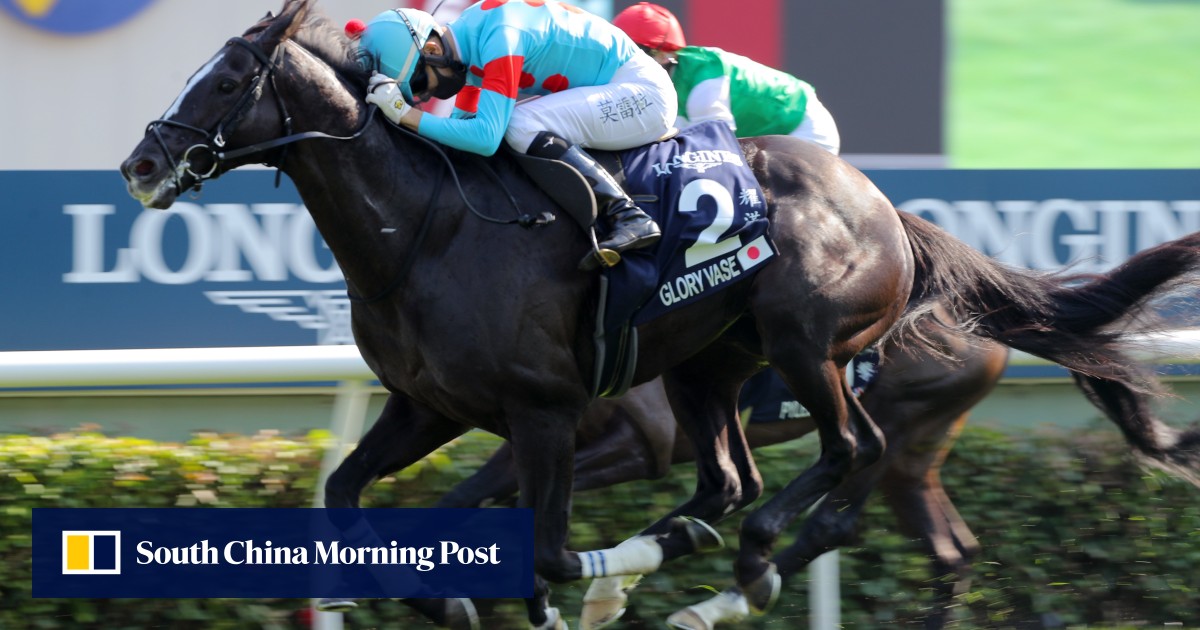 Two-time Hong Kong Vase champion Glory Vase will retire after he passes the post in Sunday’s 2,400m Group One race at Sha Tin and his trainer, Tomohito Ozeki, is hopeful the stayer will bow out as a winner and accomplish an unprecedented achievement.

Winner of the Hong Kong Vase in 2019 and 2021, Glory Vase is bidding to become the first overseas-trained horse to win three Group One events at the Longines Hong Kong International Races (HKIR) – city-based galloper Good Ba Ba won the Miles of 2007, 2008 and 2009, while Sunday’s Mile favourite, Golden Sixty, is odds on to build on his 2020 and 2021 Miles victories and cement his local legend status.

Asked if Glory Vase would race beyond the first of Sunday’s four Group One contests, Ozeki, speaking through an interpreter, succinctly outlined the seven-year-old’s future.

“He’s going to retire. This is his last run,” said Ozeki of Glory Vase, who in addition to winning two Hong Kong Vases under Joao Moreira placed second in the 2021 Group One QEII Cup (2,000m) at Sha Tin in tandem with Karis Teetan.

Mindful of the miles on Glory Vase’s clock and the candles on his soon-to-be-baked birthday cake – he will be eight years old next month – Ozeki has been meticulous in plotting the stallion’s path to his third Hong Kong Vase start, and hopefully, a special spot in history for the son of Deep Impact.

“He’s eating very well, and I’m very happy with his condition. He’s seven years old, so he’s had just two starts this season, but this is a very good preparation for his target,” Ozeki said as he touched upon Glory Vase’s 2022 results of eighth in March’s Group One Dubai Sheema Classic (2,400m) and sixth in August’s Group Two Sapporo Kinen (2,000m).

“The 2,000m of the Sapporo Kinen was a little bit short for him and the condition of the track didn’t suit him at all. But he showed very good acceleration in the last stage of the race and Christophe Lemaire, who rode him, said ‘yes, this is a good preparation [for the Hong Kong Vase]’.

“His improvement is a little bit slower than when he was a younger age,” Ozeki added as he explained his rationale for placing an even longer gap between Glory Vase’s runs than was the case ahead of the horse’s 2019 and 2021 HKIR wins. “But as for his performance in races, there’s no problem at all.”

Ozeki has chosen not to mess with what was an HKIR winning formula for Glory Vase 12 months ago, and he has received a confidence boost from Moreira, under whom the galloper did his final bit of serious work.

“He did the same as last year because each horse is allowed to work on the turf twice. The first one, he just cantered easily to get a feel for the turf. The second one, he galloped strongly,” Ozeki said.

“Moreira said he’d forgotten the horse was one year older [than his 2021 Hong Kong Vase victory] because he’s been the same level and quality as last year.”

HKIR: Watch the last start of every HK Vase runner, including Glory Vase

Glory Vase, who won both the 2019 and 2021 Hong Kong Vases from gate seven, will jump from barrier four under Moreira on Sunday. He is one of the Vase’s seven international contenders, with France’s Botanik and Bubble Gift, Germany’s Mendocino, Ireland’s Broome and Stone Age and Japan’s Win Marilyn completing the six-strong foreign legion.

“Win Marilyn is in very good form at the moment, so we’re quite confident, but Glory Vase is also a very good horse, especially in Hong Kong,” said Takahisa Tezuka, whose five-year-old mare has finished in front of Glory Vase on both occasions they have clashed, including this year’s Sapporo Kinen.

Blake Shinn does not have a Hong Kong Vase ride, but the Australian jockey expects to fulfil his eight engagements on Sunday, which include Sky Field in the Sprint and Russian Emperor in the Cup, after he obtained a new passport in Melbourne on Friday.

Denial of responsibility! NewsUpdate is an automatic aggregator around the global media. All the content are available free on Internet. We have just arranged it in one platform for educational purpose only. In each content, the hyperlink to the primary source is specified. All trademarks belong to their rightful owners, all materials to their authors. If you are the owner of the content and do not want us to publish your materials on our website, please contact us by email – [email protected]. The content will be deleted within 24 hours.
best sports newschampionfinalgloryhistorynews update sportsnewsupdaterace

Judas is the next game from Ken Levine