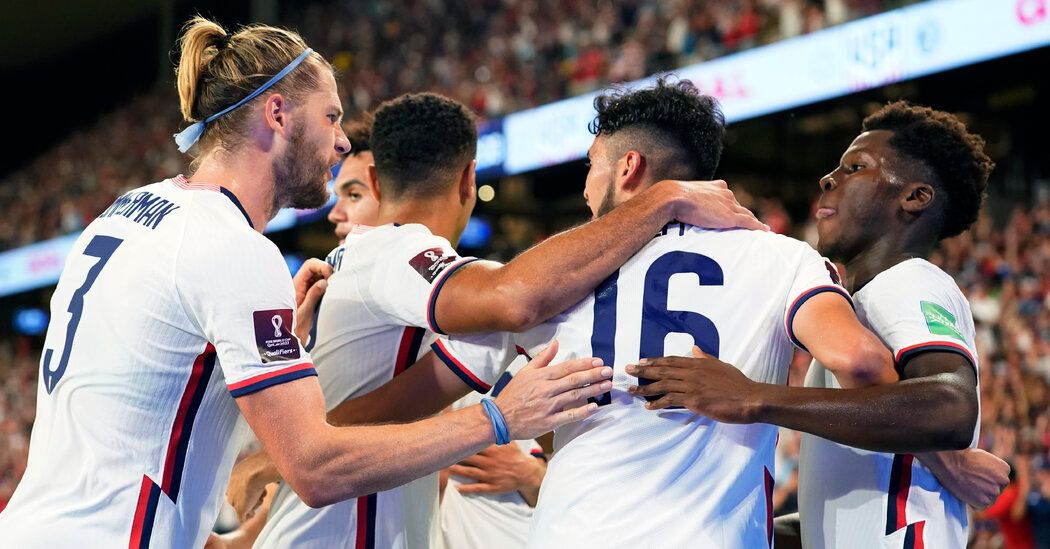 AUSTIN, Tex. — Ricardo Pepi jogged off the field as the volume in the stadium began to swell. With two masterful touches of the ball, he had done his job for the night, and he was being substituted out of the game with more than 20 minutes left to play.

Before reaching the bench, Pepi, an 18-year-old Mexican-American striker from Texas, put his head down, touched the grass and crossed himself. All the while a chant built up in the stands:

Youth is a complicated thing.

Pepi, for a night, presented a vision of a glimmering future for the Americans and the 20,500 fans in attendance, scoring two second-half goals to lead the United States to a 2-0 victory over Jamaica in their fourth World Cup qualifying match.

In relying on such a young group, with so many key players in their teens and early 20s, U.S. coach Gregg Berhalter has set up a race against time of sorts: corralling a stable of young, relatively unaccomplished talents, and hoping they will blossom in time to punch the country’s ticket to the 2022 World Cup.

So was this a display of dramatic maturation in one month’s time, or a walkover victory against a team suffering its own period of disarray? A little of both, perhaps, but the United States team and its fans will not care either way. What matters these days is stockpiling points, as many as possible, before next March.

That mission had gotten off to a stuttering start last month, when the Americans’ first three games had functioned as a hazing ritual of sorts for the young group of players. Sixteen of them made their World Cup qualifying debuts, a number frequently invoked in the matches’ aftermath by the team’s public relations staff to highlight its youth, its profuse room to grow.

“Coming into the last camp, maybe we were just a little bit naïve and didn’t know what to expect and that’s why we had to use the first three games as a learning process,” the team’s 22-year-old captain, Tyler Adams, said this week.

Their problems over those three games, which yielded two disappointing ties and one come-from-behind win, were most vividly clear on offense. The Americans passed ponderously, stifling any forward momentum they could hope to build. Opposing teams sat comfortably in their own end, and the U.S. failed to find ways through.

Amid those growing pains, one of the fastest learners was Pepi, who scored and set up two goals in the team’s third game last month in Honduras, helping the team return home with a needed win and a surge of good feeling.

On Thursday night, he was one of several American players storming into the box in the 49th minute as Yunus Musah — like Pepi, only 18 years old — made a dangerous dribbling run through the heart of the Jamaican defense. Musah slipped the ball to Sergino Dest, who curled the ball toward the mouth of goal, where Pepi curled into a crouch and let it glance off his forehead and inside the left post.

It was the same, direct approach 13 minutes later that produced the team’s second goal: Another surging run — this time down the left side, by Brenden Aaronson, a 20-year-old wing from New Jersey — coaxed Pepi into a full sprint into the box. When the ball arrived at his feet, he splayed his legs for a clean tap-in that sent drinks flying in celebration in the stands behind the goal.

Thursday’s game brought the return of Weston McKennie, who was banished from the team last month after a gratuitous violation of its coronavirus protocols. At 23, he is seen as an indispensable player, even as his immaturity often peeks through.

The team was captained again by Adams, a sage veteran at 22.

All these young players, for a night, took their blank slate and produced a hopeful picture.

Youth can be a beautifully complicated thing.

Denial of responsibility! NewsUpdate is an automatic aggregator around the global media. All the content are available free on Internet. We have just arranged it in one platform for educational purpose only. In each content, the hyperlink to the primary source is specified. All trademarks belong to their rightful owners, all materials to their authors. If you are the owner of the content and do not want us to publish your materials on our website, please contact us by email – [email protected]. The content will be deleted within 24 hours.
beatsbest sports newsJamaicanewestnews update sportsnewsupdatequalifierriding