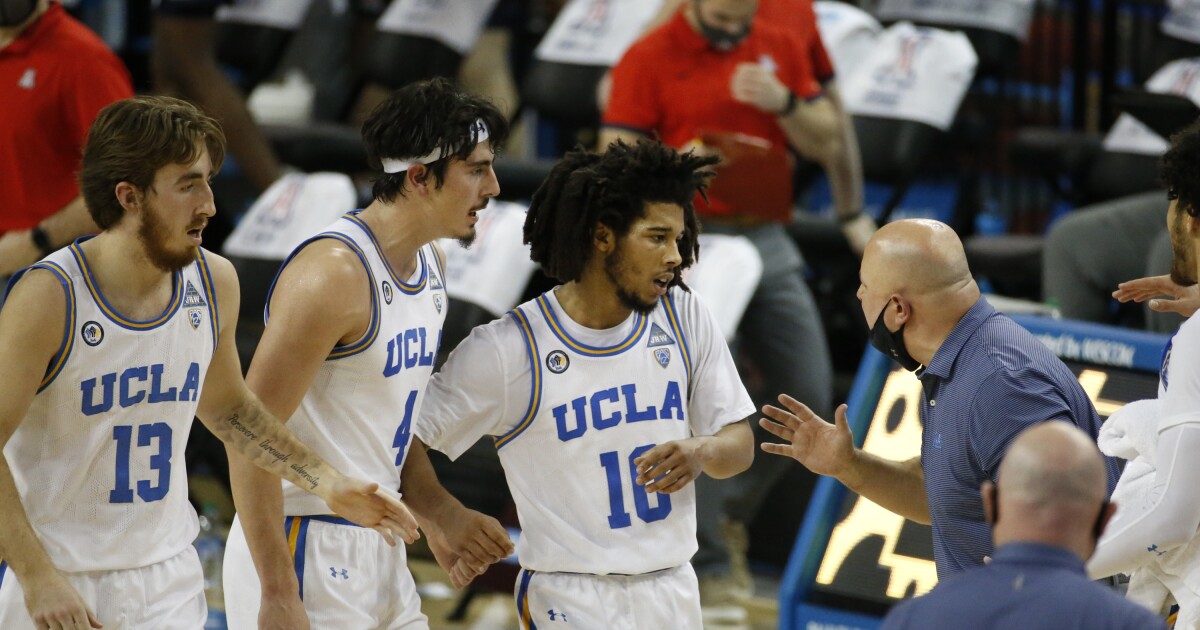 Mick Cronin has relived his most magical season multiple times, rewatching every moment of every game, with one exception.

“I just hit pause,” Cronin said Monday of his routine for withstanding the agony of Jalen Suggs’ 40-foot bank shot that sunk UCLA at the end of a Final Four loss to Gonzaga. “Things that don’t matter — social media comments, half-court bank shots. There’s nothing I’m going to learn from watching that.”

As for his team’s encore, the Bruins coach is eager to press play. Every player is back from the unexpected run to a national semifinal, making UCLA a fashionable pick to return to college basketball’s biggest stage. Several media outlets have picked the Bruins No. 1 or No. 2 in their preseason rankings, creating a welcome buzz.

“Just cause I’m from here,” said junior guard Johnny Juzang, who grew up in the San Fernando Valley and starred at Harvard-Westlake in Studio City, “seeing the program be something that the city’s proud of is awesome.”

For the first time since his arrival 2½ years ago, Cronin will be expected to have his team playing on the final weekend of the season. A reminder of the mission can be found inside the practice facility, where a giant photo of confetti-covered players wearing Final Four shirts hangs over the entrance to the court.

Cronin doesn’t just accept the E-word one season after his team went from First Four to Final Four, he covets it.

“If you’re asking how I feel about expectations,” said Cronin, whose team won five games in the NCAA tournament as a No. 11 seed, “I left a place where I could have easily been the all-time winningest coach to come to UCLA, obviously I embrace them. If I didn’t embrace them, I took the wrong job, guys.

“Let’s just call it how it is. You come sit where coach Wooden sat, you better be OK with that stuff.”

There is enough talent and depth to make raising banner No. 12 more than a daydream. The returning core that includes a gifted scorer in Juzang, an elite playmaker in Tyger Campbell and a gritty guard in Jaime Jaquez Jr. has been bolstered by the arrival of top prospect Peyton Watson and graduate transfer Myles Johnson.

The Bruins would have gone 13 deep had freshman guard Will McClendon not torn an anterior cruciate ligament during preseason workouts, sidelining him for the season. McClendon was expected to back up Campbell at point guard, Cronin said, a role that will now be split between Jules Bernard, Juzang and Watson.

Watson, a 6-8 forward from Long Beach Poly High, is easy to spot because of his impossibly long arms and easy smile that reveals braces. He’s impressed his new coach with his toughness in battling more experienced teammates.

“At first, it was difficult for him dealing with Jaime,” Cronin said, “because Jaime just comes at you 100 miles an hour nonstop and he’s a veteran. It’s made him better quick because now Jaime’s got to deal with Peyton and Peyton is very quick and he’s very good with the ball.”

With so much talent on his roster, Cronin’s biggest challenge might be picking from an assortment of enticing lineups. The team will be able to play fast or slow, go big or small, win in a shootout or a defensive slugfest.

The 6-foot-10 Johnson, who averaged 2.4 blocked shots per game last season for Rutgers, provides the rim protector UCLA was missing in the NCAA tournament. His presence should allow the Bruins to employ a more aggressive defense geared to generate turnovers.

“You can extend your defense, you can cause some turnovers and get easy baskets,” Cronin said, “which we really haven’t been able to do much since I’ve been here.”

UCLA will also be able to use some two-post lineups featuring Johnson alongside either returning starter Cody Riley or reserve Mac Etienne, depending on matchups and the Bruins big men’s ability to avoid clogging the interior on offense.

“Cody’s really versatile, and he’s able to spread the floor,” Johnson said, “so that’s really good for him and good for me cause then I have more room to operate.”

The Bruins will open the season against Cal State Bakersfield on Nov. 9 at Pauley Pavilion. If they don’t end play on the first weekend of April in New Orleans at the Final Four, some will consider it a disappointment.

“It’s irrelevant between the lines,” Cronin said of the expectations, “because if we taught anybody anything last year, your seed or your ranking does not matter come tournament time.”

Denial of responsibility! NewsUpdate is an automatic aggregator around the global media. All the content are available free on Internet. We have just arranged it in one platform for educational purpose only. In each content, the hyperlink to the primary source is specified. All trademarks belong to their rightful owners, all materials to their authors. If you are the owner of the content and do not want us to publish your materials on our website, please contact us by email – [email protected]. The content will be deleted within 24 hours.
Basketballbest sports newsbigCoachCroninEmbracingexpectationsMick