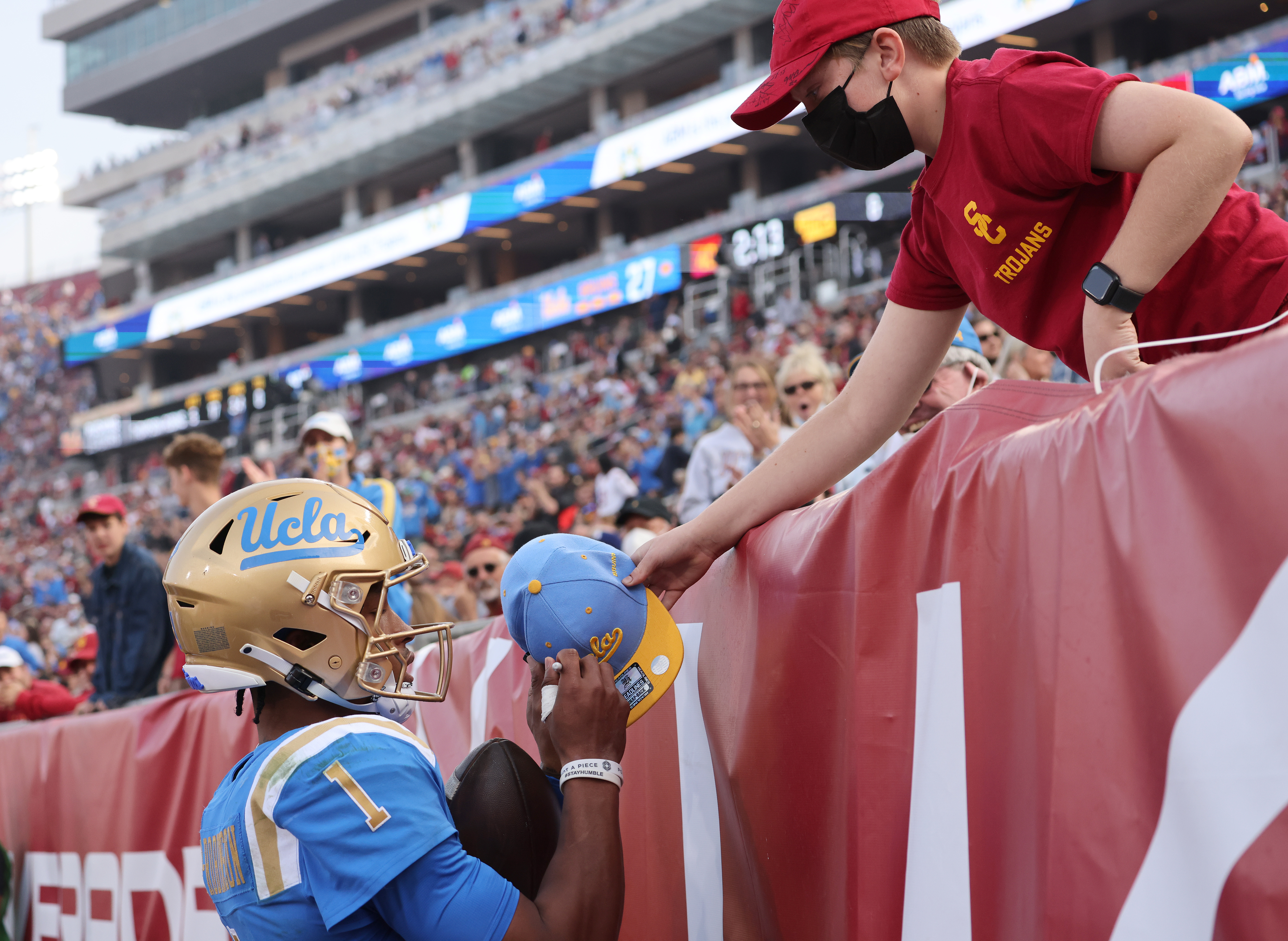 UCLA quarterback Dorian Thompson-Robinson was flagged for unsportsmanlike conduct after signing a USC fan’s hat upon scoring a second-quarter touchdown in his team’s 62-33 road win over the Trojans on Saturday.

Thompson-Robinson scored on a four-yard run to give UCLA a 27-10 lead with 2:13 left in the half. He then saw the fan extend his hand with the hat, and the Bruin signal-caller was happy to oblige even if he rooted for the arch rival.

Ben Bolch of the Los Angeles Times got the scoop surrounding the interaction.

Declin Manz, 12, a lifelong Trojans fan, wanted to get UCLA quarterback Dorian Thompson-Robinson’s signature on a hat at halftime because DTR had thrown him a glove at the Coliseum two years ago. So when DTR scored, Declin gave him his hat and got the memory of a lifetime. <a href=”https://t.co/DW852PS1SX”>pic.twitter.com/DW852PS1SX</a>

Thompson-Robinson didn’t have to worry about officiating postgame when he met with 12-year-old Declin Manz to take a selfie:

Dorian Thompson-Robinson reunites with the fan who gave him a hat to sign during the game to take a selfie. <a href=”https://t.co/S5Jhp3GlFR”>pic.twitter.com/S5Jhp3GlFR</a>

The senior out of Las Vegas finished the game with 349 passing yards, four touchdowns (two interceptions) and another 46 rushing yards and two scores in UCLA’s 29-point win.

Denial of responsibility! NewsUpdate is an automatic aggregator around the global media. All the content are available free on Internet. We have just arranged it in one platform for educational purpose only. In each content, the hyperlink to the primary source is specified. All trademarks belong to their rightful owners, all materials to their authors. If you are the owner of the content and do not want us to publish your materials on our website, please contact us by email – [email protected]. The content will be deleted within 24 hours.
best sports newsDorianFansFlaggedHatnews update sportsnewsupdatesigning