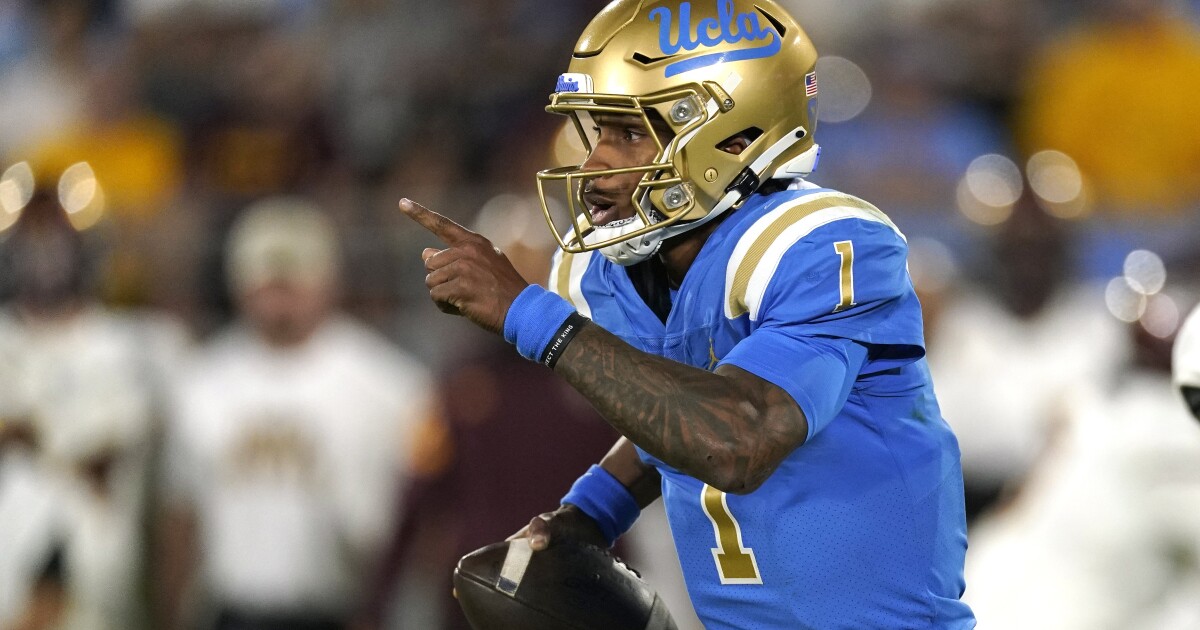 UCLA quarterback Dorian Thompson-Robinson will return for a fifth season

When he announced he was coming back for the 2021 season, UCLA quarterback Dorian Thompson-Robinson trumpeted his decision with a three-word tweet, declaring, simply, “One more year.”

He’s decided to make it two.

Capitalizing on the extra year of eligibility granted to all college players in the wake of the COVID-19 pandemic, Thompson-Robinson will return for a fifth season with the Bruins, putting him in position to potentially set school records while enhancing his NFL stock.

“See you in 2022!” Thompson-Robinson tweeted Monday atop a collage of photos of himself in Bruins garb.

Thompson-Robinson’s spectacular play late last season sparked a surge in which UCLA averaged 49.3 points over its final three games — all victories — including a record 62-33 beatdown of rival USC in which Thompson-Robinson threw for four touchdowns and ran for two more.

Maligned by fans for erratic play earlier in his career, Thompson-Robinson was widely embraced after the strong finish to his senior season, which included vaulting a Trojans defender on his way to the end zone for the score that set the record for points by UCLA in the rivalry game.

Over his final three games, Thompson-Robinson completed 69.7% of his passes for 770 yards with seven touchdowns and two interceptions while also running for 246 yards and three touchdowns. He was poised to help UCLA (8-4) try to notch a ninth victory for the first time since 2014 when the Bruins’ Holiday Bowl matchup against North Carolina State was canceled only hours before kickoff because of a COVID-19 outbreak on the team.

A favorable nonconference schedule that includes games against Bowling Green, Alabama State and South Alabama — all at the Rose Bowl — could help the Bruins get off to a fast start next season while generating some early Heisman Trophy buzz for Thompson-Robinson.

But he’ll have to operate behind a retooled offensive line with left tackle Sean Rhyan announcing Monday that he would declare for the NFL draft, joining right tackle Alec Anderson in leaving UCLA with remaining eligibility. Thompson-Robinson will also need to find new favorite targets with receiver Kyle Philips and tight end Greg Dulcich, who combined to make 101 of the team’s 207 catches last season, departing for the NFL

For the 2021 season, Thompson-Robinson ran the top-scoring offense in the Pac-12 (36.5 points per game) while ranking No. 1 in the conference in total offense (274.4 yards per game) and passing efficiency (153.9). He was an Associated Press first team All-Pac-12 selection after completing 62.2% of his passes for 2,409 yards and 21 touchdowns with six interceptions while also running for 609 yards and nine touchdowns.

Thompson-Robinson has moved into the top five at UCLA in career passing yards (7,541), career total offense (8,722 yards), career completions (594), career touchdown passes (64) and career quarterback rushing yards (1,181). His return gives him a chance to overtake Cade McNown, who threw for 10,708 yards in four seasons, as the school’s all-time leading passer.

Barring the arrival of a transfer quarterback, Thompson-Robinson will once again be backed up primarily by redshirt freshman Ethan Garbers. In two brief appearances and one start last season, Garbers combined to complete 60.8% of his passes for 305 yards with two touchdowns and two interceptions.

Denial of responsibility! NewsUpdate is an automatic aggregator around the global media. All the content are available free on Internet. We have just arranged it in one platform for educational purpose only. In each content, the hyperlink to the primary source is specified. All trademarks belong to their rightful owners, all materials to their authors. If you are the owner of the content and do not want us to publish your materials on our website, please contact us by email – [email protected]. The content will be deleted within 24 hours.
best sports newsDoriannews update sportsnewsupdateQuarterbackreturnSeasonsports news