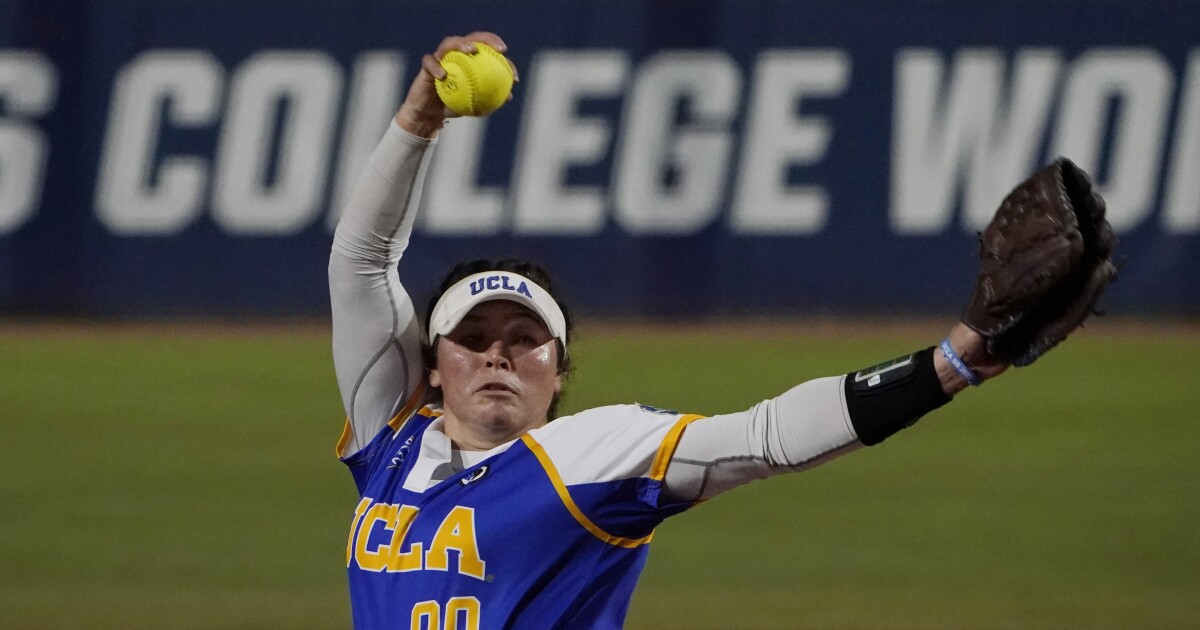 The Alabama pitcher turned 21 on Friday and celebrated by pitching a perfect game with 14 strikeouts in a 6-0 win over No. 2 seed UCLA in the second round of the Women’s College World Series in front of a record crowd of 12,337.

While the third-seeded Crimson Tide won their 20th straight game to advance to Sunday’s national semifinal, the Bruins (47-6) must now fight through the losers bracket to defend their 2019 NCAA title.

UCLA’s loss sets up a potential blockbuster matchup Saturday at 4 p.m. PDT as the Bruins will face the winner of a Saturday morning elimination game between No. 1 seed Oklahoma and Georgia.

After the Bruins swept the Sooners in the 2019 championship series, most were expecting the teams to meet again in the final this year. The dream matchup was spoiled by Fouts, who outdueled UCLA pitcher Rachel Garcia, and tournament darling James Madison, which upset Oklahoma in the first round and advanced to the national semifinal with a 2-1 win over Oklahoma State on Friday.

Garcia gave up seven hits, five earned runs and three walks with just three strikeouts, including a three-run home run to Kaylee Tow in the fifth inning that gave the Crimson Tide (52-7) a five-run lead. The Bruins’ offense that outscored opponents 128-18 in fifth, sixth and seventh innings this season couldn’t make up the difference against Fouts.

The Southeastern Conference co-pitcher of the year struck out nine of the first 12 batters she faced and was slowed only by her gold necklace that got caught in her face guard and picked free by a teammate. Combined with her career-high 16 strikeouts in a first-round win over Arizona, the junior has 30 strikeouts and no walks in two WCWS games.

UCLA’s offensive struggles spread to its defense in the sixth inning. Typically sure-handed shortstop Briana Perez allowed the leadoff runner to reach on a throwing error. A bunt that was close to rolling foul was fielded by third baseman Delanie Wisz, allowing Alabama’s Savannah Woodard to advance to second. Woodard scored two batters later, putting a sixth run on the board, tied for the most allowed by Garcia in a game this season.

Garcia, one of just four players to win the USA Softball collegiate player of the year award multiple times, hasn’t looked like her dominant self in recent games. Friday was the second time in four appearances that she gave up six runs, the first being in Game 1 of the super regional against Virginia Tech. The Bruins turned to redshirt sophomore Megan Faraimo to save the season in Game 2, when she pitched a one-hit shutout with 11 strikeouts.

UCLA doesn’t have that option now. Faraimo didn’t travel to Oklahoma because of an injured right hand. Garcia, who threw a combined 317 pitches in the first two games, likely will take the circle again Saturday with the season on the line.

Loading...
Denial of responsibility! NewsUpdate is an automatic aggregator around the global media. All the content are available free on Internet. We have just arranged it in one platform for educational purpose only. In each content, the hyperlink to the primary source is specified. All trademarks belong to their rightful owners, all materials to their authors. If you are the owner of the content and do not want us to publish your materials on our website, please contact us by email – [email protected]. The content will be deleted within 24 hours.
Alabamasbest sports newscounterFoutsGameLossMontananews update sports